A harsh irritating wind blew over the barren landscape. Japan's Ministry of Finance and the Bank of Japan had intervened in an attempt to prop up the falling yen against the US dollar. Currency markets responded with "Meh".

A nasty downpour lashed the land. Mainland China's President Xi Jinping consolidated power in a two hour speech in front of that nation's 20th National Congress of the Communist Party. There would be no changes announced as far as China's "zero-Covid" policy is concerned. It appears that China will look inward. Talk that once allowed for thoughts of eventually becoming the world's largest economy, now merely aims for per-capita GDP that might rise to the level of a "medium-developed country" by the year 2035. Chinese stocks sold off sharply. The Hang Seng (Hong Kong) Index suffered its worst day since 2008. Q3 Chinese GDP printed above expectations, but below target.

We find the US dollar stronger overnight. We see WTI Crude futures trading lower. We also see yields for US Treasury securities behaving indecisively as Monday morning beckons. That last one has and will be the ultimate arbiter. For if yields for US sovereign debt products can be tamed, US stocks can, if not prosper, at least maybe catch their collective breath. US equity index futures have stumbled through the overnight from Sunday into Monday after opening significantly higher on very light trading volume on Sunday evening.

Rainbow in the Dark

Last week started out innocently, if not painfully enough. Broadly, results for the week as a whole were rather strong, however... The fact is that the S&P 500 had made lower daily lows on Wednesday, Thursday, and Friday before an article at The Wall Street Journal penned by Nick Timiraos, believed by many to have his ear to the Fed, hit the tape. That article hinted at the possibility that the FOMC might lift its target for the Fed Funds Rate by 75 basis points - as expected and as priced in - on November 2nd, and then potentially slow down on the aggressive pace of recent rate hikes.

This would, in theory, permit the US economy to at least partially catch up in real-terms to where the Fed is currently on policy. You and I both know that the real economy lags policy by at least nine and as many as eighteen months. Those at the committee must know this, right? We can only hope. Recent history and certainly recent rhetoric leaves plenty of room for doubt. The thinking here, or at least my thinking is that maybe the Fed is in aggregate... becoming somewhat concerned that they may have caused real harm to the US economy (duh) and being that very little real progress has been made in slowing down consumer level inflation, they had better stop soon and survey the damage created.

The US Ten Year Note paid as much as 4.31% and Two Year Notes as much as 4.63% at one point late last week. The above mentioned story allowed US equities to find some footing on Friday after having rallied on Monday and Tuesday, and then sold off on Wednesday and Thursday. The beauty of this rally was that it came on higher trading volume a few days after a previous attempt to change trend. This is exactly the kind of confirmation that we, as professionals, look for. 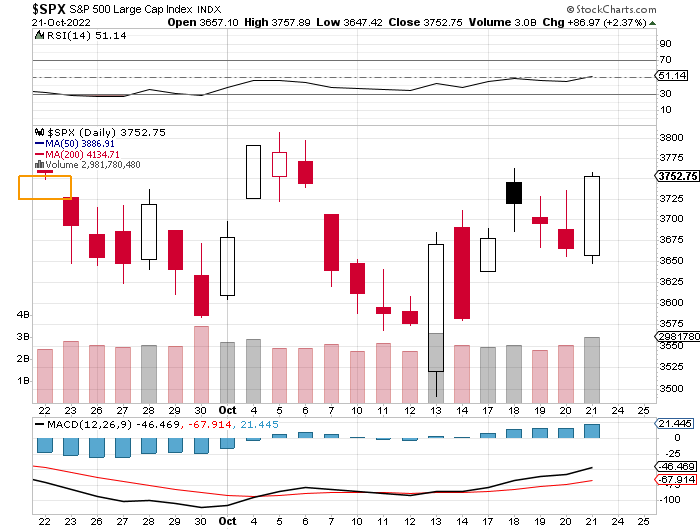 Note the attempted change in trend set in motion on October 13th. There had been a follow-up attempt to confirm last Monday and Tuesday. This failed as trading volume had tailed off from where it had been on Thursday, the 13th. On Friday, the rally spoken of here was broad-based, and also occurred on increased trading volume.

Does confirmation mean that there has certainly been a change in trend? Not exactly. However, with the Fed having gone into their media blackout period, with a semi-thin - at least early in the week - macro schedule ahead, and with a bevy of mega-cap names set to report in coming days, the table has been set. Probabilities are (again, my opinion) that if not a lasting change in trend, then at least a "tradable bottom" was set on October 13th and confirmed on October 21st. That's good enough for me. For now.

All 11 of the S&P sector-select SPDR ETFs shaded green this past Friday, and all 11 funds also ended in the green for the week. Energy (XLE) managed to gain an impressive 8.28% over the five days, with Technology (XLK) , Materials (XLB) , and Consumer Discretionaries (XLY) running 6.46%, 6.07%, and 5.27%, respectively. Notably, though, with all sectors SPDRs gaining at least 1.87% over those five sessions, the four sectors defined as 'defensive" in nature came in places eight through 11 on the weekly performance tables. Telling? Maybe.

As the Energy sector has been the home of the recent surge in equity pricing, the group has also been top dog all year. 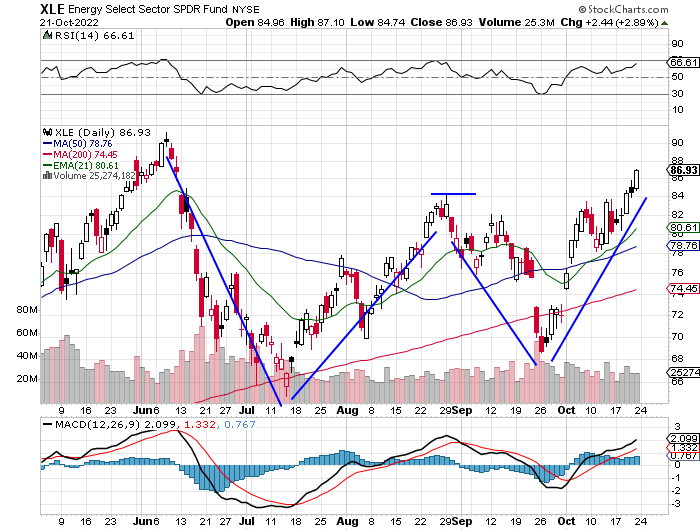 Readers will see that the Energy SPDR ETF, last week... broke above an $85 pivot created by a "double bottom" pattern. Readers will also see that Chevron (CVX) has more or less adhered to the same ebb and flow. (Note: I am long CVX with a $191 target price.) 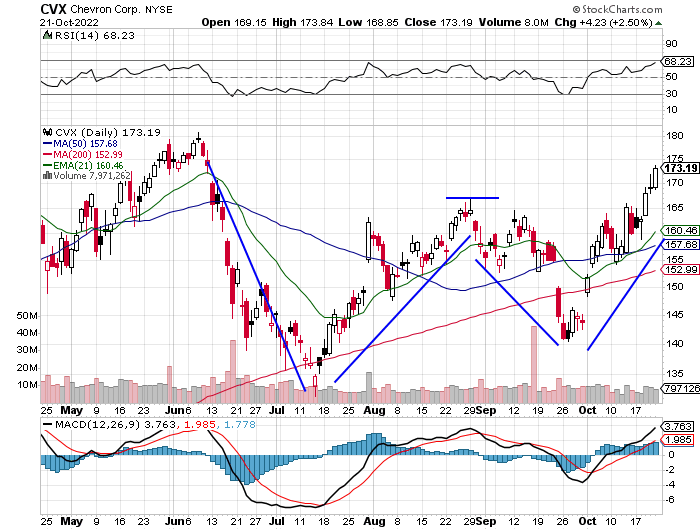 That said, when I look at ExxonMobil (XOM) ... yes, I see the same capital flows represented, but to me the action in that stock looks more like an ascending triangle. 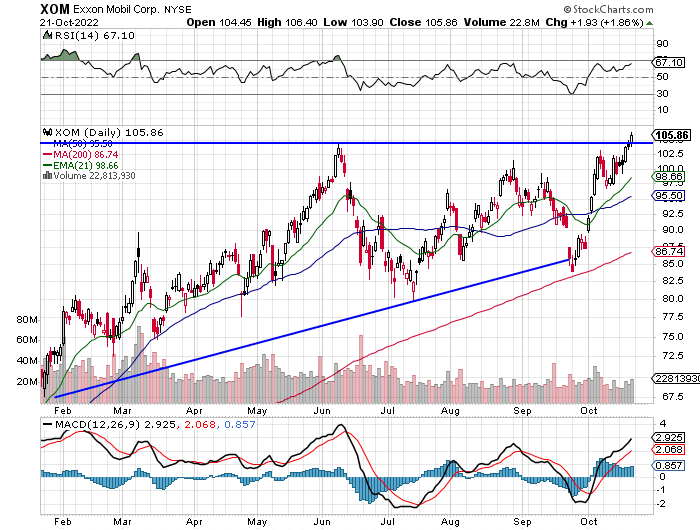 If what I see is correct, that means that XOM is breaking out right now off of a $105 pivot. Should the pivot hold, I could see a target price of $121+. Both Chevron and ExxonMobil report this Friday.

Now that we've mentioned earnings, this week will bring forth quarterly numbers from the likes of Alphabet (GOOGL) , Microsoft (MSFT) , Meta Platforms (META) , Apple (AAPL) and Amazon (AMZN) . In short, the complexion of this entire earnings season will likely be cemented one way or the other this week. Using FactSet as my source, with 20% of the S&P 500 having already reported, earnings beats are running at a 72% clip, while revenue beats are humming along at 70%.

Long-time Sarge fave Lockheed Martin (LMT) soared 16.7% last week after reporting third quarter earnings and after being awarded a $476M contract (completion by August 2025) by the US Army on Friday for the Guided Multiple Launch Rocket System. Lockheed was the Industrial sector's top performing stock for the week. This was the explosive move that we were looking for when we drew up the LMT chart with the precise Fibonacci support in July followed by the closing pennant formation. No, I was not sure which way the wind would blow at the time, nor how far the stock would eventually come in, but this is the fruit of that labor. 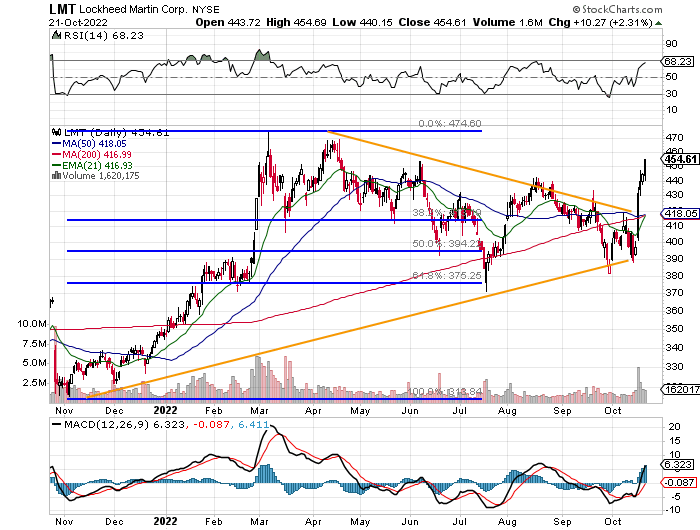 Other Sarge favored defense contractors such as Northrop Grumman (NOC) , General Dynamics (GD) and Raytheon Technologies (RTX) were up 12.6%, 9.7% and 7.2% last week, respectively. All three of these names report this week, Wednesday through Thursday. LMT, NOC, and GD all appear to be picking up momentum well above their respective 21 day EMAs, 50 day SMAs, and 200 day SMAs. 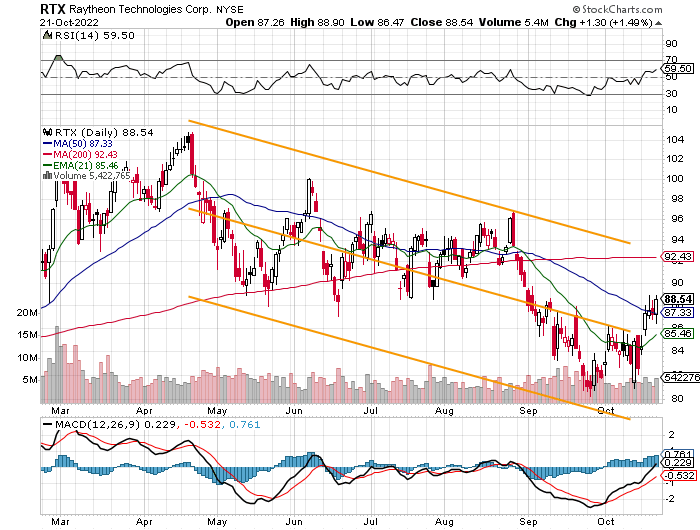 Raytheon Technologies is either marching to its own tune from here, or has become the late year pick of this litter. I will remain exposed on the long side to all four of these names right through their earnings releases.

(GOOGL, MSFT, AAPL, AMZN, and LMT are holdings in the Action Alerts PLUS member club. Want to be alerted before AAP buys or sells these stocks? Learn more now.)