Twenty-three miles outside of the fallen national capital. All was apparently lost. The seat of government had been forced to flee the city. Snow. Never ending. Heavy for three days now. December 25th, 1777. The winter of agony had only just begun. Sentries stood upon their hats, just to put something beneath their bare feet. Twelve thousand troops, the last hope of the ragtag Continental Army remain in the field. More than three thousand considered unfit for duty due to illness.

Holiday dinner? Whatever could be found locally. Some mutton, maybe. Some hickory nuts, more likely. Not close to enough for all. Shelter? For the most part, hastily built wooden structures and the tattered remains of what passed for tents. This... would be for all intents and purposes... the national capital for close to the next six months. A few relentlessly persistent, barely mission-capable soldiers alone within a day's march of Philadelphia. Thank goodness this enemy did not like to fight in the cold.

It was Christmas Day. That night, his colleagues found him in his tent. As cold as the night air and the ground he lay upon. His name was Jethro, a freed American of African descent, who had enlisted in Connecticut, and died alone of malnutrition and exposure in this semi-forested area of Pennsylvania. He was the first of many that would die horrible non-combat deaths that winter. We do not know his last name or even if we had one. We only know that his colleagues called him Jethro, and he had made his mark in order to fight for and defend a free home and the ideals that we all believe in, but maybe for him seemed elusive.

The Army that left Valley Forge in the spring of 1778, was not the ragtag crew that sought refuge in the wilderness that miserable December. They had been drilled, as newcomer Freidrich Wilhelm von Steuben, who had almost certainly presented himself to George Washington as something more than he really was, had taught the army everything from discipline to the small unit tactics of the day. He was if anything, the first true DI (Drill Instructor) in U.S. military history. The Continental Army had become a confident, capable fighting force that would still spend years in the field and with the help of French soldiers and sailors, gain independence from the global super power of that time.

As we break for the holiday in the year 2021, let us be grateful for those who forced themselves to endure oh so long ago, when all must have appeared hopeless. Let us say a little prayer this Saturday morning as we enjoy the company of, or at least talk to loved ones. Let us say that little prayer for the repose of the soul of Jethro, an American soldier, who died alone in a cold field in Pennsylvania, and for the many who followed him into eternity that winter. To Jethro. Always Faithful.

Friday might be a market holiday, but it became obvious on Wednesday that trading volumes had started to truly dwindle. Wednesday was indeed the second day of a broad equity market rally that has seen the Nasdaq Composite and S&P 500 recapture both their respective 50 day SMAs and 21 day EMAs. The lack of participation forces us to delay confirming that "all is well." That said, the forces of seasonality are on the side of the "longs" at this point. Not that a "Santa Claus Rally" is certain. Nothing is ever certain. That said, the last week of the calendar year over the past 15 years has provided 10 winners and five losers for an average return (S&P 500) of 0.88%.

On Wednesday, all 11 S&P sector-select SPDR ETFs closed in the green, led by the Consumer Discretionaries (XLY) that were led by the autos that in turn were led by Tesla (TSLA) . The Technology (XLK) and Health Care (XLV) sectors both also scored gains of more than 1% as not cyclical, not defensive, nor growth type stocks really distinguished themselves for the session. The US Treasury yield curve, the VIX and (CBOE) Put/Call ratios all appear to have stabilized. Winners beat losers on Wednesday by a rough three to one at the NYSE and by about five to three at the Nasdaq. Advancing volume comprised 75.1% of the NYSE composite, and 65.3% of the Nasdaq Composite. Aggregate trading volume, as mentioned above, was light, down 19.5% from Tuesday's totals for NYSE-listed names, and down 11.2% from Tuesday for names listed at the Nasdaq Market Site.

Jingle Jingle. Tis the season... for the federal government to jam a literal ton of macroeconomic data points down your throat in the course of just a few hours. Can you handle data on jobless claims, personal income, personal spending, consumer level inflation, durable goods orders, new home sales, and consumer sentiment all in about 90 minutes time? Can the algos? Yes, they can, so you need to be able to as well.

Though all of the above mentioned data points are important in the grand scheme of things, Core PCE on a year over year basis is what financial markets will grasp onto. Wall Street is looking for a 4.5% print for November, up from October's 4.1%. For the sake of comparison, November Core CPI hit the tape at 4.9%. The CPI is produced by the Bureau of Labor Statistics, while the PCE print is furnished by the Bureau of Labor Statistics and is what the Fed is referring to when "they" mention inflation... perhaps because it has consistently run cooler than has the CPI for many years.

President Biden, on Wednesday... extended the pause on student-loan repayments another 90 days as the Omicron variant of the SARS-CoV-2 coronavirus spreads rapidly across the nation. This extension will push the expected resumption of individuals servicing those loans out until May 1st. In the meantime, a total of 41M borrowers save an estimated total of $5B per month, while keeping an unknown number of these borrowers out of default.

Thank You, No Thank You

On Wednesday, the FDA issued an Emergency Use Authorization (EUA) for Paxlovid the oral antiviral treatment developed by Pfizer (PFE) that showed an 89% efficacy rate in reducing the risk of hospitalization compared to a placebo for adults suffering from Covid-19. The authorization had been expected.

Markets had expected that Merck's (MRK) antiviral, Molnupiravir might also gain an EUA this week, but so far that has been a "no-go." Instead, after Phase 3 trials showed that this treatment cut the risk of hospitalization by a rough 30% for patients suffering from Covid, France became the first country to publicly cancel an order for the drug, based on the results of that study. The UK, in contrast, placed an order on Wednesday for an additional 1.75M courses of the therapeutic, bridging that nation's total order up to 2.23M courses.

According to Cloudflare (NET) , the TikTok app owned by China's ByteDance was the world's most visited website in 2021, dethroning Alphabet's (GOOGL) Google, the 2020 champion, that came in second place this year. Meta Platform's (FB) will close the year in third place. Just an FYI, I have still never been on TikTok. Guess I'm out of touch.

Perhaps even more exciting was news, or rather a report at the website 'Mashed" that suggested that the Taco Bell fast food chain of Yum! Brands (YUM) might be taking a page out of the McDonald's (MCD) McRib playbook, and be considering returning the fan favorite "Mexican Pizza" item to the menu, perhaps for a limited run. Taco Bell has not confirmed the possibility. On that note, I do enjoy at least one McRib every year and eagerly await the return of Mexican Pizza.

Anyone else watching this epic battle at the 200 day SMA for customer relationship management software giant Salesforce (CRM) ? This is something to behold. From 10,000 feet, readers will see support that showed up at the nearly perfect 61.8% Fibonacci retracement of the March through November rally. Note that the rapid retracement came out of a failed cup with handle pattern that left an unfilled gap in between $277 and $283. 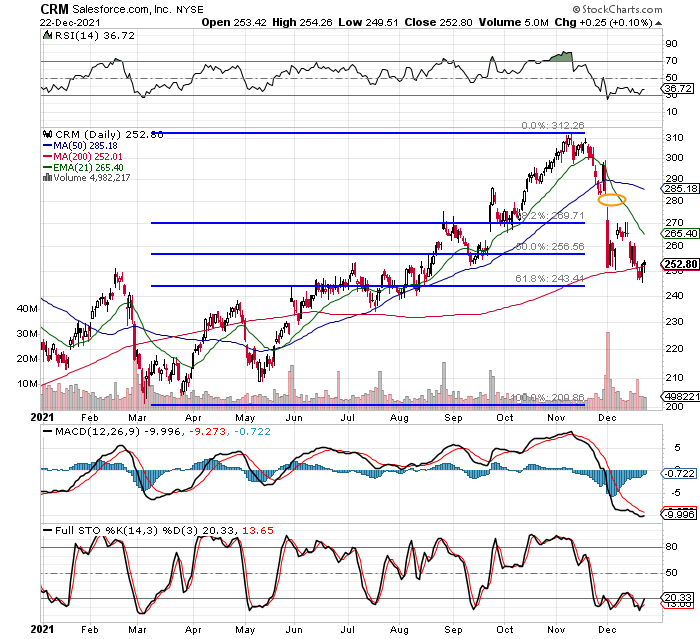 Now, readers will see a Relative Strength Index that is trying to recover from hitting technically oversold territory, a Full Stochastics Oscillator that still screams "Oversold", and a daily MACD that looks like Tokyo the day after King Kong and Godzilla paid their little visit. Let's take a closer look.

Just look at that fight at the 200 day line. For the new kids, the 200 day line is where risk managers often force portfolio managers to act. Find support? They add exposure. Lose that line, and they will reduce exposure in a heartbeat and blame each other down the road. Note that the 200 day line was indeed support in early December and has been resistance for the past four sessions. That said, the stock has never lost contact with that line.

I bet on Salesforce in "after hours" trading and added to my existing long position. I have canceled my former target price which was closer to $400 than $300. Now, I just look to fill that gap. I'll cut bait as soon as I see that line break and notice other portfolio managers running for the hills. Fortunately, I am my own risk manager.

Get an email alert each time I write an article for Real Money. Click the "+Follow" next to my byline to this article.
TAGS: Economy | Investing | Markets | Stocks | Technical Analysis | Trading