The day the markets "got" it.

By nearly every metric, those markets still closed lower for the week. Trading volume remained lackluster. Just another relief rally? Just another "bear market rally"? Perhaps. Citigroup (C) released "bullish" looking earnings, in contrast to what JP Morgan (JPM) and Morgan Stanley (MS) had released the day prior. Wells Fargo (WFC) turned in a poor quarter, but also appeared to shine a light on the positive prospects for traditional bankers going forward.

The positivity stretched into the macro as well. Data covering June inflation caused a mid-week selloff. Headline CPI and PPI for the month terrified keyword reading electronic traders up and down Wall Street. Just one thing... both Core CPI and Core PPI on a year over year basis have cooled each month from the month prior since March. March, by both metrics was indeed the month of peak inflation (February, according to Core PCE), even if June was the apex for headline inflation. Anyone who pays attention, or buys gasoline, knows that headline inflation for July will cool from June.

The central bank can not impact the impetus (plural) that have driven rapid headline inflation though intentional demand destruction. It is clear that tighter monetary conditions for which the Fed is only partially responsible have already impacted core inflation. This is a good reason for cautious optimism.

Delving Into The Data

While equity markets certainly dwell in what is still a downtrend, a tradable bottom had been built in mid-June and has now been reinforced. The S&P 500 has retaken its 21 day EMA and now could put together a third attempt since late May to pressure its 50 day SMA from below... 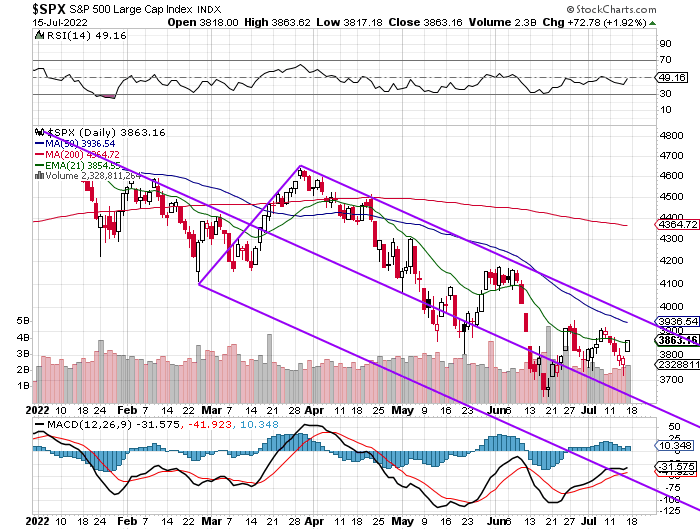 The Nasdaq Composite stands in the same position, technically, but is much closer to actually making a run at that 50 day line... 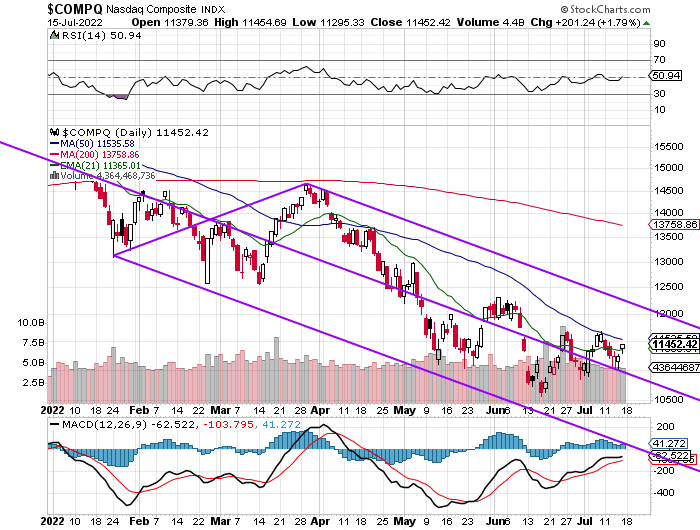 The Nasdaq Composite failed at this line as recently as 10 days ago. I can not stress enough how key taking this line can be, under the right circumstances. Certainly, portfolio managers feel more comfortable living with higher levels of exposure when major indexes reside above key moving averages.

Was it really just about a couple of "less than terrible" banks, and choosing to look at core inflation, and away from headline inflation? Of course not. There's more. There was the New York Fed survey last week that showed consumer expectations for inflation easing a bit in June from May over the next three to five years. There was the Empire State Manufacturing Index that surprised to the upside last week. Within that survey were moderately cooling responses for Prices Paid and Prices Received at the present and expectations for both of those components to cool significantly within six months' time.

Then, we turn to the preliminary University of Michigan's Consumer Sentiment survey for July. The data within the data shows that consumer expectations for inflation next year peaked in March and April and have cooled since. The survey also shows that consumer expectations for inflation five years out, peaked in January, and then again in June, but cooled significantly in July. This ball is starting to roll in the right direction, folks.

Before we turn the page on this topic, think about this. On Friday, we saw data for June Retail Sales, which were hot (unadjusted for inflation) and June Industrial Production, which was cold for a second consecutive month. On balance, the Atlanta Fed revised lower the contributions of real gross private domestic investment and real personal consumption expenditures to its GDPNow real-time snapshot model for the second quarter. This took the model down to -1.5% (q/q SAAR) for Q2 from -1.2%. Readers will recall that the US economy contracted (-1.6%) back in the first quarter.

A number of "professional" economists have recently acknowledged the "possibility" of an economic recession in the US this year, even as common folks can see the obvious. The US economy stands about this close >< to having already been in contraction (and in recession) since the start of the year, even if "they" play all kinds of games with the definition of the word "recession" so as to claim that six months of contraction no longer defines anything other than half a year of one's life.

Not the adventures of "Super Grover", but the adventure of the FOMC. Those charged with the planning and implementation of monetary policy in the US can all see what we see. Some of them will kid themselves, or at least try to kid us. Others know better. We enter the Fed's media blackout period ahead of the July 27th policy decision this week. Currently, futures trading in Chicago are pricing in a 69% probability of a 75 basis point rate hike at that time (and a 31% likelihood of a 100 bps hike). Odds are currently for another 75 basis point hike in September, then two baby steps (25 bps) in November and December to get the target range for the Fed Funds rate up to 3.5% to 3.75% by year's end.

These futures markets are also pricing in the start of an easing cycle as soon as June 2023. How interesting is that? These markets not only figure in how far the FOMC will go, and when they go that far, but also when they will decide that they went too far. Incredible.

You know, there are alternatives. Given that the Beige Book told us that monetary conditions are clearly tightening and the data as well as expectations around economic growth and core inflation obviously back that up, the FOMC could be more precision driven in their aggression and less blunt in the application of monetary force. If for July, core inflation continues to moderate, and if the Q2 GDP data confirms what every sentient being used to understand as recession, then forget September and beyond. Jackson Hole in August would be an excellent opportunity for the FOMC to fine-tune forward guidance through skillful use of the ancient tool of rhetoric.

Not the kind that we're used to. Not a race to the bottom. The Bank of Canada surprised all last week with a 100 basis point increase to their Overnight Rate. The Federal Reserve Bank has started to go "big" and is talking "bigger", putting a relentless bid under the US dollar relative to its reserve currency peers. This is a deflationary force in inflationary times. We may not feel it, but this is currently benefiting us.

Now, the rest of the world must defend their currencies as fighting inflation becomes more important than playing the game to gain an edge in cross-border trade for goods and services. Throughout the second quarter, there were 62 increases of at least 50 basis points made to policy rates by 55 central banks. There have been 17 more such increases made in July to date. The Bank of England has not made such a large move, but some members of the MPC are now signaling such a move on August 4th.

The European Central Bank, long not one for stomaching more hawkish policy, is set to meet this week. The expectation is for a 25 basis point hike made to the Main Refinancing Rate. Does this do anything to slow the Euro's outright collapse against the US dollar? Probably not. I would think that another run at parity develops this week. The Bank of Japan also meets this week. The difference is that they don't care. They are still playing the game as if it's 2020.

No Fed speakers this week. Light macro. An easy week? Not likely. Earnings season is back in full swing. According to FactSet, with 7% of the S&P 500 having reported, the blended (results and expectations) rate of earnings growth for the quarter is now 4.2% on revenue growth of 10.2%. Projections are still for a net profit margin across the S&P 500 of 12.4% for the quarter, which contrary to popular opinion, is in-line with recent performance. That same S&P 500 starts the week trading at 15.8 times forward looking earnings.

As far as the events calendar is concerned, the Farnborough Air Show kicks off today in England and will run all week. Boeing (BA) and Airbus (EADSY) will strut their stuff before representatives of a number of international airlines. Several defense contractors will also make presentations. Here in the US, Microsoft (MSFT) will host their Inspire event this Tuesday and Wednesday, focusing on cloud partnerships and opportunities. Much closer to home (for me), will be the Bloomberg Crypto Summit to be held on Tuesday in New York.

Watch the Treasury yield curve this week. Yes, the curve remains horribly mangled. Recent changes have been small, but positive. Check this out. Late last week, the 2 yr/10 yr spread, which got worse overall, may have found a level...

(MS and MSFT are holdings in the Action Alerts PLUS member club. Want to be alerted before AAP buys or sells these stocks? Learn more now.)