Clear skies at night. No artificial lighting. Just you, and your view. So spacious. Every star, even some planets... so visible. With a little luck, one will be out there when these celestial bodies start to move around. The brain stops in wonder as the eyes follow a "shooting star". Dust, rocks, meteorites? Doesn't matter. What matters is the moment taken to appreciate.

Were you able to appreciate Tuesday's shooting stars? The Health Care sector led equity markets higher. The sector was led north by the Providers, really, UnitedHealth Group (UNH) on the strength of that firm's quarterly "beat and raise." You were thinking that maybe the banks led? The banks as a group did very well, but the Financials as a sector came in third on what was indeed a solid day. The Communication Services Sector finished second, riding the Facebook (FB) , and Alphabet (GOOGL) pops.

Now, the Financial sector. In truth, the banks as an industry performed as well as any sector as a whole. It was not just the fact that those banks reporting on Tuesday, primarily "best in class" JP Morgan (JPM) , and Citigroup (C) that ran. Not to mention First Republic (FRC) . That firm crushed it. The strength across the group was really in consumer banking, and that sat very well with investors. Even Wells Fargo, a firm that literally threw everything negative into this quarter ahead of a new sheriff riding into town, showed a healthy consumer. Then the money flowed. Interestingly, the one bank without an especially strong consumer presence, Goldman Sachs (GS) was the one that sort of bombed this quarter, and that stock was ultimately rescued off of the day's lows as the wonders of passive investment (ETF flows) kicked in.

Interestingly, both the S&P 500 and the Nasdaq Composite have been very strong since testing their respective 200 day SMAs in early October.

This sudden improvement in broad equity performance correlates quite well with the recent bottoming and then un-inversion experienced by the spread between the US 3 month T-Bill and the US 10 year note. As I have stated many times, this spread for me is key above all others.

As we traverse the wee hours on Wednesday morning, U.S. equity index futures have traded moderately lower, as Brexit negotiations appear to breakdown without a breakthrough ahead of Thursday's EU summit in Luxembourg. This spread has contracted to a positive 7 basis points as darkness rules the night.

Markets have placed higher bets on growth, or at least on the halting in the deterioration of growth, despite a semi, sort of trade deal that isn't. Why would that be? Quite simply, I believe markets have embraced the Fed's balance sheet expansion plan that will commence at $60 billion per month, and most significantly target short-term debt. The Fed is doing this right. Let me repeat... the Fed is not screwing this up. That is what is the deal here, and that is why the important spread pictured above has moved so sharply in a positive direction.

Need some proof that portfolio managers are lining up behind the Fed here? Take a glance at the transports. Up 7% in less than two weeks.

The index finally retook both of the major averages this week. This is a pure growth play. The airlines and perhaps delivery services may benefit from lower fuels costs, but fuel is more than that to the rails. Fuel is cargo, and despite a troubled environment for energy prices, the rails, in percentage terms, and in aggregate are outperforming the transports over that time.

Has this environment truly changed? Headlines will continue to rule intra-day, or intra-week swings. Brexit, trade with China, political, geopolitical, you name it. The fact is this: There has been an undeniable shift in some thinking among those who move money. They are less afraid. Am I less defensive in posture, now that the 3 month/10 year spread has shown some resilience?

While someone taking a look at my book for the first time would probably still describe it as defensive in style, someone comparing that book's complexion to where it was a week ago would notice a shift in allocation toward value and some growth from purely playing defense.

Try to remember what I have taught. It's not just for when we are in crisis mode. This is for always. What we do, in a constant state of evolution is simple. We...

2) Identify. Areas of weakness. Avenues of approach. Targets of opportunity.

3) Adapt. Make necessary adjustments based on reason. No ego. No emotion. None.

5) Maintain. See step one. No victory. No defeat. Only progress. Got knocked down? Get up.

So, the IMF (International Monetary Fund) wants to take another crack at estimating global GDP for 2019. Okay, what the heck. Might as well let them. The bad news is that the IMF has lowered the fund's projections for 2019 growth in the U.S. to 2.4%, in the EU to 1.2%, and China to 6.1%. (??), and for planet earth to 3%, all based on suppressed conditions for cross-border trade. Guess they somehow did not see that one coming. The IMF now forecasts global trade volumes to expand by 1.1% for 2019. This is down from their own estimate of 2.5% growth just three months ago. (Again.. ??)

Listen, nobody should ever panic based on projections made by the IMF. Maybe we give them a pass, given that the whole operation is now under new management. Over the past few years, my perception has been that the IMF is best at telling you what you could have told them three months ago. You (I) never learn anything you did not already know from this crew. The good news might just be that the IMF finally recognized how bad trade had been. That might just be a contrary indicator.

Apparently, a research note published by Bank of America Securities made the rounds on Tuesday. In the piece "The End of 60/40" strategists Derek Harris and Jared Woodward make an argument for reconsidering the role of bonds in one's portfolio, and perhaps moving away from the traditional 60/40 model (60% equities/ 40% bonds).

While I do get the need to examine and adjust portfolios on the fly, this piece really took me by surprise, as I had no idea anyone still used a 60/40 model. Perhaps it has been so long since I relied upon someone else's advice, and the fact that I am willing to dramatically alter my allocation almost on the hop, that I had never even considered that some investors might still use a "set it, and forget it" approach.

That really was something. The semis had already benefited from last week's optimism over the "sort of" trade deal that isn't with China. The stock of Nvidia (NVDA) exploded to the upside on Tuesday (+5.3) in response to Bank of America Merrill Lynch analyst Vivek Arya's reiteration of his "buy" rating on the shares and his increased price target, now a street-high $250. Vivek cites Nvidia's prospects for growth in the data center, and sees potential for the firm's sales in this space (that includes AI applications) to grow 17% per year through 2024.

The daily chart for NVDA over the past year plus is complex, so stay with me. 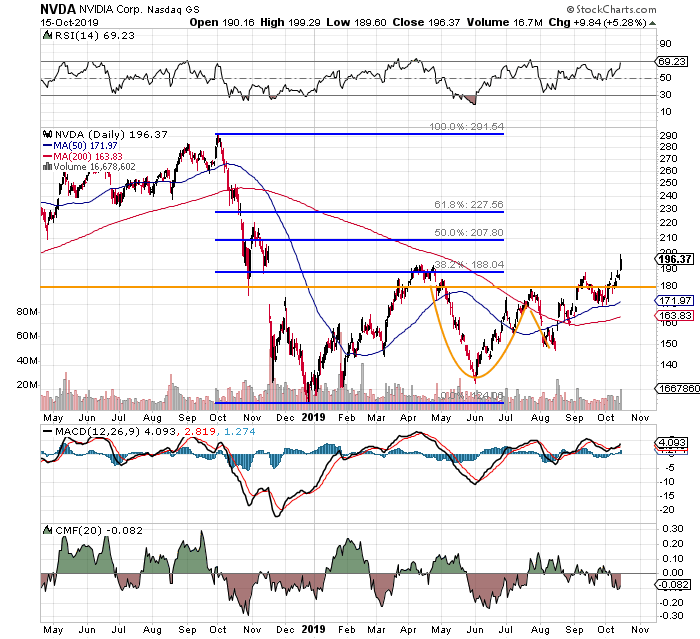 Blue Set-Up: NVDA has now significantly broken out from $188 resistance. This spot had been a 38.2% Fibonacci retracement of the stock's grand October 2018 through December 2018 selloff. This would set up eventual potential for movement to $207, or perhaps even $227, depending on time frame.

Orange Set-Up: The April through July action now looks like a huge cup with handle formation. Ten cup with a depth of more than 30% and the handle significant enough at 11%. The pivot there was the $179 level or so. You already have a 9.4% gain off of that pivot, though the action has been sloppy.

Get an email alert each time I write an article for Real Money. Click the "+Follow" next to my byline to this article.
TAGS: Bonds | Earnings | ETFs | Federal Reserve | Investing | Markets | Options | Stocks | Technical Analysis | Trading