Ramblings of a Madman

Who do investors trust? What can investors trust? Does the public understand the carnage inflicted by the worst October in a decade? The S&P 500 did close the month 6.9% lower. Can the public embrace the 3% rally over the last two days of that month? The skinny is this. Yes, probabilities are in the market's favor going into November. That in itself guarantees us nothing. Do you recall what I wrote to you on Monday morning? I mentioned the bullish divergence that I had noticed over the weekend across daily charts for all the major indices. Though markets did sell off that day, that did put the probability of success for net long portfolios in favor, and really that is what we do here. We make our best effort based upon the information available. So, my friends... trust nothing.

Historical patterns suggest that mutual funds tend to dump their losers at the highest rate in October, setting up the fabled (but not necessarily there) "chase for performance theory" for year's end that runs into the usual inflows of early January. We do know that historically, after a midterm election that equity markets tend to run double digit percentage gains no matter which side does better in the election. Then again, while we unveil election uncertainty once again this year, we have never done so while simultaneously increasing short-term interest rates and drawing down the Fed's balance sheet (reducing potential liquidity in the event of a crisis).

Think that's all? The U.S. Treasury has already told us that their budget deficit increased by 17% for the fiscal year ended in September from the year prior. U.S. Treasury debt issuance for this quarter will likely reach it's highest level since 2008. Does anyone even think about the bond vigilantes anymore? My guess is that they are still out there, in the jungle, somewhere. Swift, silent, deadly. Should the FOMC push out short-term yields without an amplified reaction on the long end, the economy could (probably would) stall. Should vigilantes take long-term control away from the central bank (very possible), well that could be worse. That is purely a growth and inflation story. They believe or they don't.

So, it is... that at the same time, one is as likely to hear in the financial media concern over the potential for the economy to either overheat, or slow down... in the same day. The bottom line, for this guy, is that markets are headed toward a more difficult environment. One where both equities, and debt securities run the risk of selling off together. An environment where aggressive monetary policy goes a bit too far, and fiscal policy is forced at some point to embrace some form of austerity. It is clear that until we see a more balanced approach toward a more balanced federal budget that Fed Chair Jerome Powell chases, consumer level inflation that by most corporate statements probably should have shown itself in more significant fashion by now.

You all know that your best position over the past month or so has been your cash balance. I see, according to Bank of America, that their wealth management clients are now running cash balances of a rough 10.4%. I usually tell retail investors that given their need to fund household expenses that family cash balances should be above 20%. After all, basements leak and cars break down. By the way, my cash balance is higher than that, at least until Tuesday's election. After that, we'll only have global growth concerns and trade wars to worry about, but all that said, Santa is on his way. A lot of pressure on the jolly fellow this year.

Roll of the Die

Like I have tried to explain, what we do is simplify the bull case and bear case, and make our best effort based on our own interpretation of probable outcomes. Roll one die. The odds of seeing either an even number or an odd number face up are very close to even. Now, draw an extra dot on the side that had only one dot. Not so even anymore. The evens now have a two to one advantage.

As luck would have it, forward looking valuations have come in significantly in October. Of course, the E as in forward looking PE ratios has to stay put, but we'll leave that as constant for the moment. What do we have? We have a legitimately cheaper marketplace, just as many firms go about cranking up their corporate repurchase programs. If these firms are not going to invest in capital goods, and we have seen those numbers in national decline for two months, and if these firms refuse to pay up for help (slow progress there), then they are going to be aggressive in reducing their share counts.

By the way, November is on average the most aggressive month for this sort of behavior. We may not have a very accommodative monetary environment at the moment, and the labor market may be running out of available runway unless more folks participate.... but we do have a lot of big firms, with repurchase programs already announced, that still have a lot of cash. Think my long position in Micron (MU) is stupid? You may be right, but I think the probability of success is significant for that one.

Our friends at Apple (AAPL) report tonight. The name has softened over the past month, but strengthened in recent days, mimicking the marketplace in general. Apple, according to Bob Pisani's article at CNBC's website, has reduced shares outstanding by 26% since 2013 through their corporate repurchase program. How interesting is that? We all know that a scarcity of available shares has been a main driver for higher five year average valuations versus average valuations over the longer term. That, by the way is a legitimate fundamental reason for those higher values, and is not some kind of perverse outcome of the modern era's model for price discovery. Not only are there less public companies, but public floats are much smaller.

By the way, Qorvo (QRVO) knocked the cover off of the ball last night. The AAPL supplying chip-maker beat expectations for both EPS and sales, and is trading much higher overnight despite having warned on demand from Chinese based handset manufacturers. Does Qorvo's outperformance for their third quarter move the needle for Apple? Well, it certainly is a positive that for QRVO, revenue derived from mobile products increased by 37% and now makes up more than 75% of the firm's entire sales for the quarter.

My thoughts on this are while hardware sales are still so very important for Apple's current state of profitability, it is the level of progress made by the firm converting existing customers to the subscription economy that investors will focus on. Have you made the jump to the iCloud, to Apple Music, to Apple Pay? Shareholders are hoping so. The firm may be judged by it's progress in turning clientele into captive recurring revenue drivers.

Remember L Brands (LB) ? Yeah, those guys. The shares have given up roughly 60% over two years. Left for dead at the side of the road, these shares have been gaining value in almost stealth mode for most of October... and September. Is something going on here? On Wednesday, Moody's apparel analyst Michael Zuccaro mentioned his positive outlook for the U.S. apparel and footware industry. He cited "faster than anticipated revenue and profit growth." He did not mention apparel retailers, but Goldman Sachs mentioned this firm last week. Goldman initiated this name on Friday with a "Buy" rating and a $36 price target.

This name runs with an incredible 7.4% dividend yield. Is that sustainable? The balance sheet is awful. The debt-load simply dwarfs cash on hand, and makes up about two-thirds of market cap. Have you seen their earnings growth? Neither have they. The need is for some kind of restructuring that may or may not include a dividend cut. My gut instinct is that any positivity around this name would be in the expectation of progress being made in improving the firm's fundamentals. 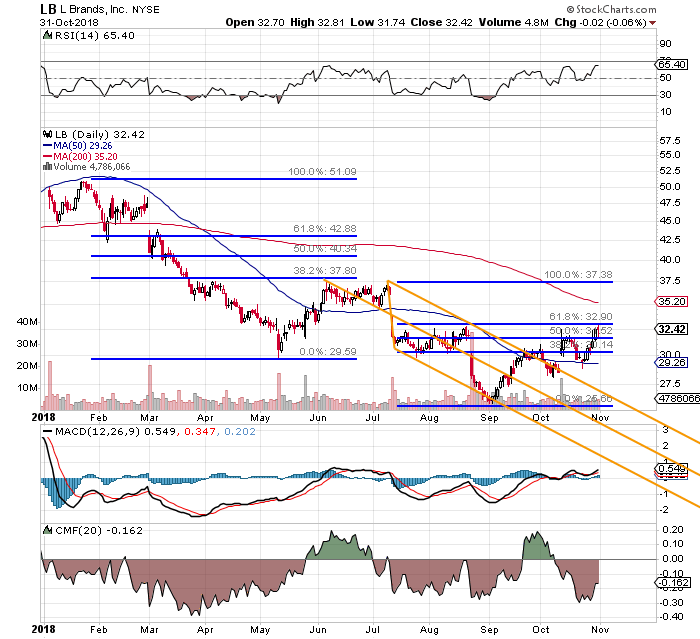 What I see is a name that grazed 61.8% Fibonacci resistance in Wednesday trade, that broke out of it's summer Pitchfork in early October. Is something afoot? It sure does look like at least some investors thinks so. For me, this may not meet my requirements for sound investment, but for a short-term trade, my standards are far lower.

Note One: The aggregate layout for the options trades amounts to a $0.21 debit. By pushing out expiration well past earnings (scheduled for Nov. 21st), this set up allows for the shareholder of record (likely to be sometime in early December) to participate in any announced dividend. If that dividend is left unmolested, the trader will receive a payment of $0.60 per share, thus creating a net profit of $0.39 for all steps taken outside of the equity position itself.