Monday's trading session brought with it the kind of pressure not seen for more than two weeks. The foil was taped, the jerseys were buttoned down, the gloves were dropped. Is there much to take away from this action? Really? I can tell you that there are multiple forces at work here. I'm pretty sure that as losers beat winners by a rough 4 to 3 at the New York Stock Exchange, and 11 to 8 (Is 11 to 8 even a thing?) at the Nasdaq Market Site. I'm pretty sure I caught a whiff of both profit taking and tax loss selling, two causal forces that on the broader playing field should counter each other. In April. Individually.

The volatility experienced in the long end of the U.S. Treasury curve was the real story on Monday. Early on, the U.S. 10 year note paid more than 1.93%, later on, just over 1.88%. At one point, the spread between the yields offered by the three month T-Bill and ten year paper expanded to more than 37 basis points, only to close around 33 bp. Oddly, this put three sectors that make for odd bedfellows at the top of the market's intraday standings. Safe haven assets such as Utilities and REITs that can behave something like bond proxies in low interest rate environments ran first and second, while the Financials, a group that tends to do better when spreads between what short-term and long-term debt yield expand, finished in third.

Twas beauty that killed the beast? Nah. That was growth. Growth killed the beast, at least on Monday, as Internet, Semiconductors and Software names found there way to the bottom in terms of performance. While trading volume managed to grow on Monday from Friday, that volume was attributable to constituent firms of both the S&P 500 and Nasdaq Composite in aggregate remained below 50 day moving averages for each index. In other words, if you took one in the teeth on Monday, yeah... the prices do count, but there is no takeaway that one can make with any conviction. The session was a simple output of "beat the buzzer" moves (tax-loss, profit-taking), and algorithmic trading in reaction to volatility in Treasuries.

What this amounts to is a fun little story for non-participants. We all know that the S&P 500 is up less than 10% since early September 2018, so maybe we stop kidding ourselves. 10% over 15 months is not and should never be anything to sneeze at. It's also a realistic and more sustainable run rate than pretending that we just hit a six run homer as we stand at home plate asking ourselves if we can do it again.

A Long Time Ago

One year, back in the day, I don't remember what year, Tom Seaver was one of the scarcest Topps baseball cards to find. Seaver was at the top of his game at the time, an annual threat to win the National League Cy Young Award in an era where there was ample competition for that trophy. My brother and I had to pool our resources. We were Mets fans. We knew a Yankees fan that had a Seaver. He was willing to trade, but he wanted a lot. We had to up 42 cards, including a bevy of Yankees that had to include Bobby Murcer and Thurman Munson or there would be no deal. We had to make side deals to get the necessary Yankees, but we did, because Seaver was our guy. Our adolescent brains had created a market need.

On Monday, the South China Morning Post reported that Chinese Vice Premier Liu He would visit the U.S. this week at invitation to sign the Phase One trade deal between the two nations. That's all well and good. The markets already seem bored with Phase One. The economy? For either nation? Well, not escalating the trade war is a solid positive. How accretive will the deal be to actual growth? I mean, China does have a lot of mouths to feed, and many of their hogs have died of illness, so if you happen to be a U.S. farmer stuck with a backlog of soybeans, or about to see higher prices for hogs to be exported, than this deal certainly is welcome.

What Beijing has promised is to import much more of these agricultural products (and energy?), to better enforce protection of foreign intellectual property and a more open domestic market for financial services. The increased imports will work to improve the aggregate U.S. trade deficit... to sate a market need... at the expense of other breadbasket nations. The latter two items will require supervised development that still leaves doubts. More important structural changes will be left to Phase Number Infinity, and who knows when we'll see that. I think I might be on the other side of the dirt by then. All the U.S. really had to do was suspend the December tariffs, and partially roll back the September tranche. In short, trust will remain an issue. The positive takeaway is more in sentiment, than it is likely in needle moving type economic improvement. That is still a key positive. Just that I think it likely priced in. The risk as I see it, for the short-term is more to the downside where as trade related market impact is concerned.

Don't get me wrong. I can in no way predict a precise future. Anyone who does so with expressed certainty surely knows not. We still have the Fed, we still have fiscal policy sure to oversupply the bond market, that could by extension pressure the U.S. dollar. Those are short-term positives for equities. Fourth quarter earnings season kicks off in two weeks. That probably won't be very pretty, but that too may be priced in. What I am trying to say, is that beyond an algorithmic reaction, I do not expect an overtly positive market reaction when pen is put to paper on Phase One. (That said, I won't complain if I'm wrong.)

Out With The Old

In with the new. Speaking of the Federal Reserve, the composition of the FOMC (Federal Open Market Committee) is about to go through its annual changing of the guard. First, a little education for the new kids, or for those afraid to ask. This all important committee consists of the Fed's board of governors, which is supposed to count seven members, but has been stuck at five for a long while now. This group includes Jerome Powell (Chair), Michelle Bowman, Lael Brainard, Richard Clarida (Vice Chair of the Board, but not the committee), and Randal Quarles. This rate setting committee also includes five of the 12 regional presidents. Of the 12, New York is always one of the five, and provides the Vice Chair to the committee. That's currently John Williams. The other four slots rotate.

Those who voted on policy for the last time on December 11th, 2019 would be Boston's Eric Rosengren, and Kansas City's Esther George. Both were outspoken hawks in 2019. Also on the way out would be James Bullard of St. Louis, who was openly dovish this past year, and Chicago's Charles Evans a long-time persistent dove, who while not dissenting, did appear to back away somewhat from that stance as the yield curve improved.

Those who will vote on policy for the first time this January 29th will include Cleveland's Loretta Mester, who I see as a hawkish replacement for Esther George on the committee, and Minneapolis president Neel Kashkari, who has staunchly advocated for lower rates until inflation becomes a problem. That leaves Philadelphia's Patrick Harker, and Robert Kaplan of Dallas as potential wildcards. Through 2019, in public appearances, Harker seemed to lean hawkish, while Kaplan leaned the other way, yet neither seemed to me to be married to an ideology. I see both of these votes as potentially pragmatic going forward, which correct me if I'm wrong... would be exactly what should be a preferred trait in a policy maker.

Needle In a Haystack

Breakouts to the upside were difficult to find on Monday. I think I found one. The Transports were lower with the broader markets on Monday. Delivery Services were hit by the ugly stick. United Parcel Services (UPS) and FedEx (FDX) both took severe beatings. The Airlines did little better, as JetBlue (JBLU) , Alaska Air (ALK) , and Delta (DAL) led the way lower. Among the rails, Norfolk Southern (NSC) , CSX Corp. (CSX) , and Union Pacific (UNP) offered no quarter. How about Marine Transport? Ahh, the needle in the haystack. Let's take a look at Kirby (KEX) . 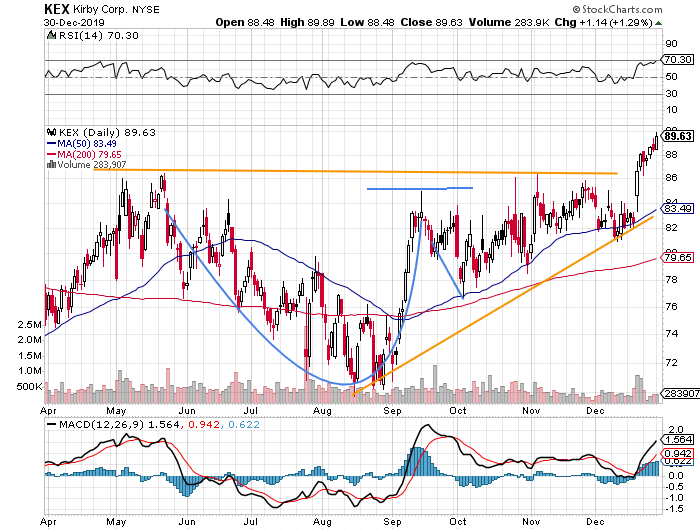 Amazing what higher commodity prices can do for a business that had mostly flat-lined for years now. To be honest, I am not sure exactly what I am looking at, but it is clearly positive. If I am looking at the powder blue cup with handle pattern, then this delayed breakout could still have legs. A potential target price up around $100 would not be crazy at all.

Now, check out the orange ascending triangle. In place since the August lows, right? Let's zoom out a little. Or a lot.

We really have a long term convergence of lower highs and higher lows that could result in an explosive move to the upside. Before we go getting all fired up, the stock trades at 25 times forward looking earnings, and ran at least recently with a cash position of less than $10 million, and total debt of roughly $1.6 billion. Kirby pays no dividend, but it has to be on my radar at this point. Just thinking out loud... a June $90/$100 bull call spread would run the trader a rough $4 as of Monday night.

There are no significant quarterly earnings scheduled for release today.

Get an email alert each time I write an article for Real Money. Click the "+Follow" next to my byline to this article.
TAGS: Federal Reserve | Investing | Markets | Options | Stocks | Technical Analysis | Trading | Treasury Bonds | China