The S&P 500 turned in a nice session last Monday, despite closing at the bottom its range for that day. That, you'll recall, was when the news broke. News that interim results from the Phase 3 trials were released for the Covid-19 vaccine candidate BNT162b2. The early data shows that this collaborative effort entered into by Pfizer (PFE) and BioNTech (BNTX) might be shockingly effective (more than 90%), while also quite safe. There could be more news released from this study as soon as this week. Moderna (MRNA) announced last week as well that the Phase 3 study of their candidate MRN-1273 had reached a milestone whereas meaningful data could also be released from that trial in the very short-term.

It's no small wonder that despite some intraweek volatility, most of our equity marketplace reacted to both news and potential for news with more than cautious optimism. While that already mentioned S&P 500 did score an all-time high close on Friday afternoon, after gaining 2.2% for the week, large caps were not the stars of this marketplace. What I see as an overtly positive, broadening rotation took place. One that favored securities most representative of the most badly damaged parts of this economy, while drawing capital (but not too much capital) from securities representative of those parts of the economy that had either found ways to survive in a pandemic world, or even benefit in a perverse way from such a dislocation of normal societal function.

While we all see the S&P 500 reach these levels, and those who can read a chart will even find positivity in the negative week turned in by the Nasdaq Composite and Nasdaq 100, what is telling would be the 6.1% run for the Russell 2000, the 7.5% run made by the S&P 600, and the 4.3% romp turned in by the S&P 400. For the new kids, those are our small and mid-cap indices, far more vulnerable to economic shutdowns, and probably far more responsive to any early positivity in a normalization in human interaction that produces increased velocity in local to regional commerce.

What Am I Getting At?

Markets have been reacting very well to what has been the removal of uncertainty. The markets were quite satisfied by former Vice President Joe Biden's electoral victory, as long as the legislature remained divided. Markets obviously love the idea (as we all do) of vaccines that at least taken from that early glance appear more effective, safer, and likely available sooner than any of us had really hoped for. What could go wrong?

Well, for starters, the virus is still spreading across our great land more rapidly than I think anyone was mentally prepared for, despite being warned constantly over the summer by medical professionals that this is exactly what they feared. What if the Moderna vaccine is not as effective, or not quite as safe as what we think we have with the Pfizer vaccine? What if the second round of data produced by the Pfizer/BioNTech trial is less positive than the early numbers? What if, and this would be awful, one, or both of these vaccine candidates... somehow fails to gain FDA Emergency Use Authorization? Then it won't matter how effective the U.S Army's Quartermaster branch is, or how cold they can keep these vaccines, there will be nothing to distribute.... as the fire in your neighborhood rages on.

What if President Trump not only does not concede, but actually has solid evidence of fraudulent behavior? You laugh. It won't be so funny if his lawyers actually show the evidence they say they have. Catch the Sidney Powell interview on Maria Bartiromo's show on Sunday morning? Think what you want of Powell, but she certainly sounded like she believes what she said. How ugly would a repricing of electoral risk get? In my opinion, an unwelcome outcome, speaking solely from a market perspective. Then, even if this challenge to what appears to be the result of the presidential election amounts to nothing, there is still the threat that the Senate races in Georgia could wind up producing one-party rule, which is a risk that had already been priced out. Nobody needs that.

In short, what I am trying to say, while remaining somewhat bullish myself, is be fully aware that the uncertainties that have been, and are still being priced out of the marketplace as (12 month) forward looking PE ratios (for the S&P 500) climb back to 21.6 times, only need a catalyst or catalysts that might not be that far fetched to unravel. Especially if newly confirmed infections of Covid, and Covid-related hospitalizations continue to run unchecked. The virus is not just in New York City, or other urban areas and their surrounding counties this time around. This time, it's everywhere. Folks who probably see themselves as careful are being infected while going about their daily routines. Viral spread will remain problematic for the next three to six months even under the rosiest of scenarios.

I offer no advice. That's how folks like me get in trouble. I can, however, tell you what I am doing, and what I am thinking of doing. Readers know well that over the past few weeks I have re-engaged with the re-opening trade. I am currently long JP Morgan (JPM) , Southwest Airlines (LUV) and Boeing (BA) after avoiding the banks, the airlines, and Boeing specifically for long periods of time. I had also been in Walt Disney (DIS) for the recent run-up, and took those profits on Friday with the intention to repurchase those shares when the gap between $129 and $133 fills -- if the game plays the way I have planned.

The trick here is to be exposed to economic recovery, while not completely rotating out of the stocks that did well during the pandemic, or will benefit from a warming of trade relations with China during a Biden administration, all the while making sure that one still has a net cash position large enough to react, to remain flexible should something unplanned become reality. There is always something that comes at me from a direction that I had not thought of. Mike Tyson used to say "Everyone has a plan until they get punched in the face." That of course is a take on the old infantry idiom "Everyone has a plan until making contact with the enemy." Whichever version one subscribes to, plans are just that... plans. The best defense against the unknown will always be agility, and versatility. In other words... the ability to adapt. 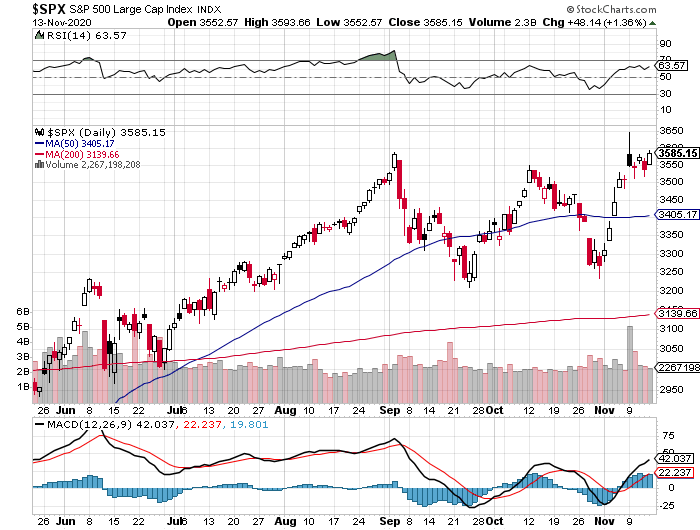 Why does the S&P 500 look good here? Simple. The index appears to be breaking out of a 3550 pivot created by a "double bottom" pattern. In addition, all gaps have been filled, and in addition to just being filled, the bottom of the most recent gap proved itself as support twice last week. As both Relative Strength, and the daily MACD appear to be in a good place, barring all of the above mentioned risks (which can not be done), the index is poised at least technically... to reach for further gains. Of course, those risks can all in different ways impact fundamental support, which is why we still support a "barbell-ish" approach. 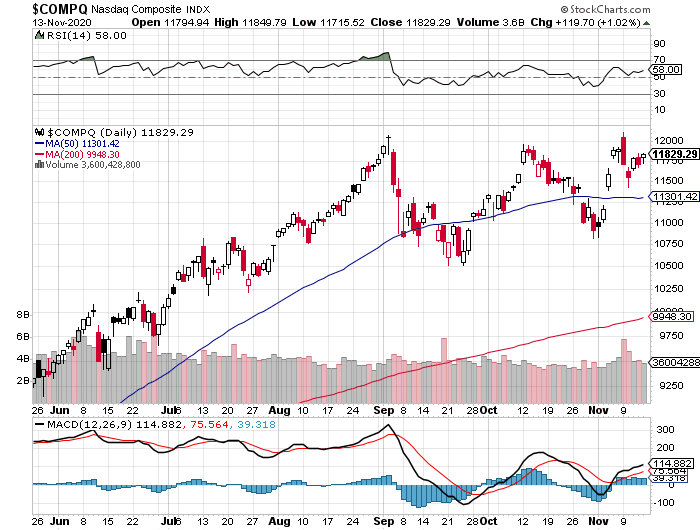 Why does the Nasdaq Composite look good here, despite a negative week? Simple. The index filled gap number two, found support above the 50 day SMA, and gained over the final three days of last week's action.

Why is the Nasdaq Composite still in a more dangerous place than the S&P 500? Two reasons: Trading volume tailed off a bit on last week's "up" days, and perhaps even more importantly, gap number two, currently straddling that 50 day line, is still impossible to completely ignore. That area could still fill, and when that happens, we will have to decide if that activity will present as warning or as opportunity. My best guess is that such a move could become the next higher low in what could be a developing "'ascending triangle"... but what do I know? I've only been around since the cows came home. BTW, that would ultimately be bullish.

Earnings season comes to a conclusion over these next couple of weeks, concentrated with the retailers as has always been the way. The retailers have never been created equal, and the pandemic environment has broadened those gaps. While I would still expect to see positive news this week from Sarge faves Walmart (WMT) and Home Depot (HD) , as well as their direct competitors... Target (TGT) and Lowe's (LOW) , the further you get away from that core the sloppier retail performance gets. I am almost more interested in seeing what Macy's (M) and Kohl's (KSS) have to say for themselves than in the names where I actually have some capital at risk. Almost. Of course, the week's earnings highlight, at least for traders, will not be a retailer at all, but will be Nvidia (NVDA) , set to go to the tape on Wednesday afternoon.

In the meantime, we'll have data on Retail Sales, Industrial Production, Housing Starts, and more Fed speakers than you can shake a stick at, to keep eyes and ears open for, in addition to vaccine related headlines. Good luck this week, gang. There is reason for optimism as long as one guards that emotion with a level of caution. We are all capable of victory every day, as long as we stay focused. We are all capable of being careless, or thoughtless even for a moment as well. It is with a personal consciousness of our own potential for failure that we set out on this glorious morning in search of spiritual, emotional, and yes... financial security not so much for ourselves but that we might be able to provide for others in our households and beyond. Carry on.

Get an email alert each time I write an article for Real Money. Click the "+Follow" next to my byline to this article.
TAGS: Earnings | Economy | Investing | Markets | Politics | Stocks | Technical Analysis | Trading | Coronavirus