"We believe that economic headwinds will mitigate the benefits from pricing power and operating leverage, leading to less robust surprises in the third quarter."

Tuesday was the "not so bad" down day, if you know what I mean. Traders certainly did not coast into the third quarter earnings session, as that last day of the unofficial "offseason" actually saw a fairly significant increase in aggregate activity. Welcome. This morning, you'll hear from JP Morgan (JPM) , Blackrock (BLK) , and Delta Air Lines (DAL) . Not exactly a daunting slate to contend with on opening day. Unless one is also fully cognizant that after these firms post their digits, but before readers even think that opening bell at 11 Wall Street, the BLS will put September consumer prices to the tape. This will be followed this afternoon by the FOMC Minutes of the last policy meeting three weeks ago.

Not so bad? Sure. For a third consecutive red candle day, both of our major large cap indices, the S&P 500 and the Nasdaq Composite, opened on the strong side, flirted with the very idea of having an "up" day, and as the session wore on, traders sold intraday strength and these indices closed near the lows of the session. A real positive takeaway might be that while the Nasdaq Composite stands 6.1% below its September 7th high, and the S&P 500 now stands 4.3% below its September 2nd high, neither index has come very close, even after three successive "down" days to challenging the lows of October 4th.

It's early, so we can not say with certainty, but both of these indices appear to still be in a downward sloping trend now more than a month old, of lower highs coupled with lower lows. However, the longer it takes these two measures of large cap performance to challenge those October 4th lows, the more likely it is that algorithmic support forms at that spot and instead of a continuance of the downward slope, the pattern would evolve into something that starts to look more like a basing period. My guess is that we can only know more as corporate leaders guide on Q4 and 2022 margin performance, as the forward looking fiscal picture develops, as monetary leaders react to or prepare for slowing growth crossed against accelerating inflation, and as the world holds its collective breath in regards to both the next wave of COVID-19 and every headline regarding both the Chinese economy and that nation's openly belligerent behavior toward its neighbors. Otherwise, pretty quiet.

The action on Tuesday was probably a lot more positive than many readers think. While the headline indices closed lower, the S&P 400, S&P 600, and Russell 2000 all gained ground, indicating strength in small to mid-cap stocks, which is backed up by the market's internals. The Dow Transports also had a nice day, up nearly a full percent, led by Avis (CAR)  , and maritime transporters Matson (MATX) and Kirby (KEX) ... if only someone were talking about maritime transport.

Economic indicators have been disappointing of late, and on Tuesday morning, the September NFIB Small Business Optimism Survey was no exception. In aggregate, numbers of small business owners either expecting the economy to improve or planning to increase employment dropped significantly from August.

Readers probably did notice some flattening of the Treasury yield curve on Tuesday as bond traders bought up US 10 year paper. Did they ever? Recall that the Treasury went to auction with $38 billion worth of new 10 Year Notes on Tuesday afternoon.

If there were any questions about demand for longer-term U.S. sovereign debt, those questions were answered with an exclamation point. The auction went off at a high yield of 1.584%, which was through the 1.59% yield where the when issued was trading at the time, and with a strong looking bid to cover of 2.58. In addition, Indirect bidders (foreign accounts) took down a very robust 71.1% of the issuance, while Directs took down 17.7%, leaving dealers with a well below average 11.2%. If one were to grade this auction honestly, especially given U.S. Treasury performance over the prior five days or so, one would have to give this auction an "A++."

Front month WTI crude futures are currently up 29% since August 20th, while the US Dollar Index is up 2.5% since September 3rd. These two are usually more like oil and water than like peanut butter and jelly. Where would oil be without this congruent move in the home currency? $100 headed for $120? Never say never.

Current Federal Reserve Vice Chair Richard Clarida told you flat out that "A gradual tapering of our asset purchases that concludes around the middle of next year may soon be warranted." Clarida added his view that for the most part, the recent surge in consumer level inflation is probably still transitory, but should the Fed see evidence that households and businesses were building expectations for persistent price increases into their budgets that there would likely be a monetary policy response.

St. Louis Fed Pres. James Bullard appeared on CNBC on Tuesday evening. He said, "I'd support starting the taper in November, I've been advocating trying to get finished with the taper process by the end of the first quarter next year because I want to be in a position to react to possible upside risks to inflation next year as we try to move out of this pandemic."

Atlanta Fed Pres. Rafael Bostic was more blunt: "It is becoming increasingly clear that the feature of this episode that has animated price pressures - mainly the intense and widespread supply chain disruptions - will not be brief." Bostic added... "Up to now, indicators do not suggest that long-run expectations are dangerously untethered, but the episodic pressures could grind on long enough to unanchor expectations." Bostic also mentioned that from his view, the sooner the central bank gets started tapering the better.

All this, just as the IMF advised central banks to come up with contingency plans to tighten policy should inflation persist longer than expected. Listen, I have been saying for quite a while now, that the Fed would have to start tapering in November and be aggressive in that tapering in order to create flexibility around short-term rate targets by mid-year. Looks like at least a core of Fed officials (Bullard and Bostic both vote in 2022.) finally understand this.

My fear - actually I fear no man and nothing made by man, I meant to say my concern... my concern would be that economic growth sputters, well before inflation does (though I still see a case for the "transitory" argument) and the Fed falls short of the finish line in their effort to normalize policy. What happens if the Fed is pressured to reignite a more accommodative policy stance prior to the full recovery of labor markets or the arrest of both consumer and producer level inflation? That would allow the inflation genie to trample the economy prior to the economy being able to absorb such activity. Something tells me that we have no Paul Volckers at the Fed today.

They used to call him Dr. Doom for his accuracy in calling the mortgage collapse and ensuing 2008 financial crisis. Nouriel Roubini appeared on Bloomberg TV early on Tuesday morning. Roubini was blunter than Bostic. "It becomes a very tough dilemma for central banks", (if growth slows)... the FOMC will "end up being dovish." Roubini actually said, "They are going to wimp out, they are going to postpone any finishing of tapering or raising rates."

This is why I have repeatedly written here, and said on national television, that I do not think that we have seen the last of TINA. That said, there could be, and probably will be, an intense period of market volatility that could stretch farther out than even I projected a couple of months ago.

The House of Representatives did pass the $480 billion bill to increase the debt ceiling enough to keep the lights on, meet obligations, pay social security, and fund Medicare and Medicaid into early December. The vote passed along party lines, which is absurd. Nuff said there. Now the left can fight the further left, and then they can fight the right. The jugglers and plate spinners will be ready in just about three weeks. Oh joy.

Apple (AAPL) shares appeared to sell off just a bit early last night, but I did get the feeling that bad news was already priced in. Reports circulated on Tuesday evening that the greatest consumer electronics company in galactic history would be cutting back on iPhone 13 production targets due to ongoing component shortages concerning semiconductor suppliers. Supposed insiders are saying that Apple will cut these targets by as many as 10 million units, with Broadcom AVGO and Texas Instruments (TXN) being two iPhone chip suppliers' names that came up in these reports.

iPhones, though the firm has diversified into a plethora of other hardware options and has developed a growing services business, is still Apple's bread and butter, accounting for 48.6% of the firm's revenue for the quarter ended in June. Cirrus Logic (CRUS) , Skyworks Solutions (SWKS) , and Qorvo (QRVO) all fought off overnight weakness along with Broadcom  (AVGO) , TXN and AAPL itself. The bulk of these stocks are now recovering off of their overnight lows as the dawn of morning's first light is still a ways off into the short-term future.

Interestingly, Qualcomm (QCOM) bucked the trend, rallying overnight on news that the firm's Board had authorized an additional $10 billion in share repurchases. Just an FYI... $10 billion is 7.1% of Qualcomm's market cap. 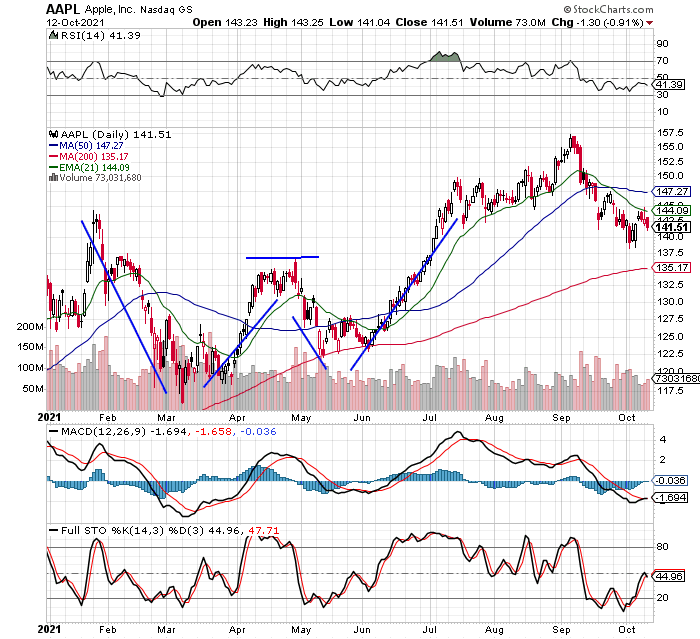 Levels to watch for today as Apple feels around for early support would be the $138 low of October 4th, that survived an October 6th retest, and should that spot break, investors will have to look for support at the 200 day SMA ($135.17). Perhaps the most bullish outcome that could become of some early Apple weakness would be to drag the 21 day EMA a little lower. That line has been stiff resistance since September 24th. On any upward (algorithmically created) momentum (earnings are in two weeks), the stock could use that moving average as a pivot.

My target price for AAPL is still $166. Should the $138 support level hold, I will be satisfied that a base has been built and that I can leave that target where it is. Otherwise, we'll be doing some math.

Get an email alert each time I write an article for Real Money. Click the "+Follow" next to my byline to this article.
TAGS: Earnings | Economic Data | Federal Reserve | Investing | Markets | Stocks | Technical Analysis | Trading | Treasury Bonds | Technology