Maybe someone else out there remembers clapping erasers. A long time ago, in a far, far away place... a time when teachers (in this case, nuns) used to put blackboards to great use. There would be a couple of times during the day when the erasers would become so filled with chalk dust that they no longer were capable of their intended purpose. Usually two students, almost always boys who had maybe been guilty of speaking during class, would be sent outside to "clap" the erasers. Fifteen minutes later, two students would return, their uniforms covered in a white/yellow film, and eureka!! The erasers work just fine, mathematics would continue. Please don't call on me. (I could always spit out the right answer in a micro-second, but never slow down the process enough to show the work. Teachers hate that.)

At what point does a change in market sentiment render the past irrelevant? Over the last weekend, market based television shows, as well as the print media, all covered the recent selloff across equity markets. All seemed to express opinions that the suddenly visible distribution indicated some level of gloom, and perhaps even doom.

It would appear, three market trading sessions later, that the students that had acted up in class had been sent outside. That the recent distribution had indeed been erased from memory - even with weakness and subsequent volatility forced upon the Dow Jones Industrial Average by perhaps the key constituent member. The S&P 500 did reach that point of resistance that all have been focused upon on Wednesday, the third consecutive day of broad accumulation. The problem, if it is a problem may, have been the market's inability to hold the level upon the afternoon retest. 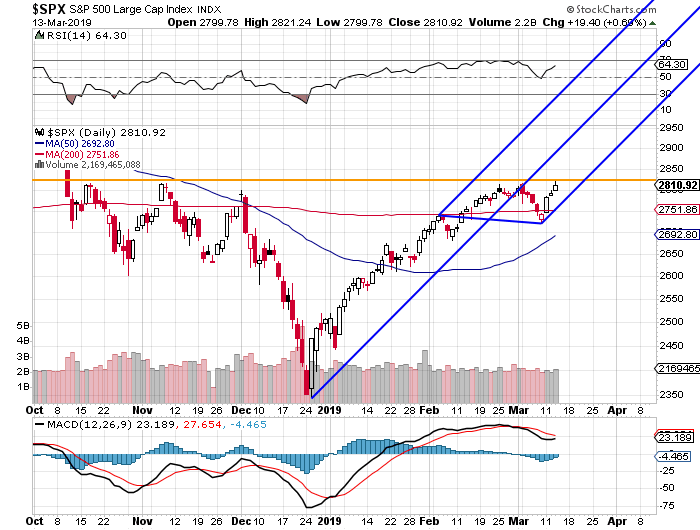 How interesting is the yellow horizontal line? That line of resistance has been as effective a deterrent as the Stonewall Brigade at First Manassas. Hopefully, the index does not make like an embarrassed Army of the Potomac and flee the field upon meeting that immovable force. The pivot point on Wednesday had actually been 2815, which turned out great for day-traders, but failed to hold late in the day for investors. Take a look at the one day chart.

So. Is it different this time? Actually, it might be. For a change, the supportive macro, was well... supportive. Kind of. January Durable Goods Orders printed far better than expected. Then again, that data actually showed contraction when looked at ex-transportation. Boeing (BA) sales were most likely accretive to the strength seen in transportation related orders placed for the month. That could now be in some jeopardy at worst, or placed in a state of delay, one might think. Away from that mess, there is no doubt that construction spending for the month of January was far stronger than any amongst us had foreseen. In short, 2815 still needs to be taken and held. The key word being "held".

"An incredible company." That's what the president called this industrial giant. As a trader, it has felt like a mistake every time over the years that I have taken a profit on a short-term long position, even if the sale had been made above target. I have never been wise enough to hold Boeing for more than a couple of months. How damaging is this developing story? Of course, tragic in terms of lives impacted. Still, bargain hunters are about, and the stock appears to have stabilized.

The FAA has grounded 737 Max-8 and 737 Max-9 aircraft after new data had been made available that did in fact show some similarity between the Lion Air crash of five months ago, and the Ethiopian Airlines disaster of this past weekend. How many nations have grounded the aircraft? Too many to list in a pre-opening market note and keep my readers reading. The straw that seemed to have broken the camel's back though felt like Canada refusing that aircraft use of it's airspace.

Dollars and cents? VietJet had ordered 200 of these airplanes. I read at Investors' Business Daily that this airline has announced it's intention to delay that purchase order until more is known. How many more airlines are thinking the same thing? The answer? Probably a few. How much of a future trade deal with China was priced into Boeing's market cap? According to Moody's, operating margin on each and every one of these planes is estimated at more than $12 million per. Put that information somewhere in your brain. That's a lot of dough on the table.

At least those among you who still choose to take a flyer on BA will do so better informed. Lion Air has already announced a decision to switch future purchases to Airbus. Other airlines will also consider either cancelling order flow, or using the threat of doing so as leverage in gaining better pricing. In addition, other fleet customers will be looking to recapture lost revenues from the manufacturer. Even a quick fix that appears to remedy everything will not quickly repair these issues, nor repair a level of trust no longer seen as automatic.

Earlier this week, I advocated for risk takers to favor something like a bull call spread over actual equity exposure as I just feel there is still too much unknown considering downside risk. 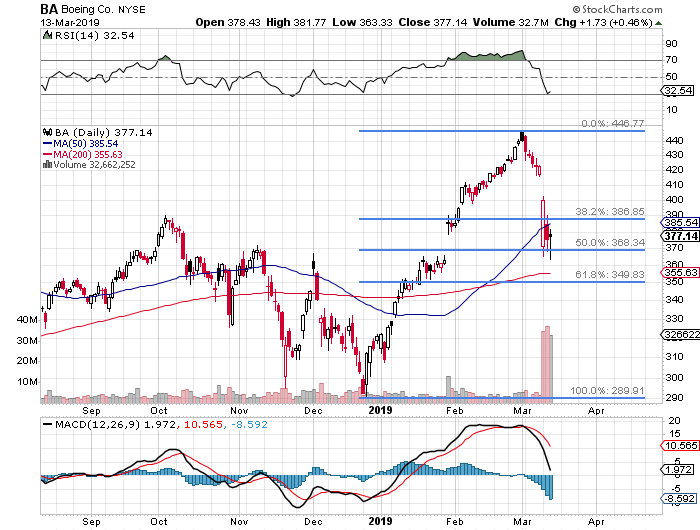 These shares have shown some support late in the day, regularly this week. My thought is that if an investor really wants these shares, patience will be rewarded. Thinking that a bid in the $355/$349 range has a chance is not crazy. For me, the risk/reward is just not there unless the shares can be had at a stupid discount. I have no problem finding something else to do with my time.

Those wishing to sleep at night might want to consider a $380/$390 bull call spread expiring this Friday (tomorrow). It is impossible to price that trade for you as the options market for this name has been as volatile as the underlying equity, and these articles publish well after I write them, but you get the idea. That spread, by the way went out at a net debit of less than $3 last night. Acceptable loss if wrong? Better than risking hundreds of dollars per share.

You kids know that I like Adobe (ADBE) . I mention the firm often enough on television. The name is also one of Jim Cramer's famous "Cloud Kings" by the way. Adobe will report the firm's fiscal first quarter financial results after the close of business this evening. This could actually be a complicated release. The industry looks for EPS of $1.62, after seeing 22 analysts reduce expectations for that number since Adobe last released earnings results. This would also be 5% growth after the firm had not seen year over year growth of less than 45% since tax reform had been implemented.

I look for more consistency in revenue growth. That number should show an increase of 22% or so, which would be in-line with what this firm has done performance wise on a regular basis. These numbers have already been priced in over the past month of sideways movement for the equity after recovering from the late 2018 selloff with the rest of the market.

The focus becomes the information within the information, and then the guidance. As is with the entire Software/Cloud space, no.. make that the entire economy, the focus becomes growth in recurring revenue. Here, the key business lines for traders to focus upon tonight will be in the firm's Experience Cloud, as well as in the more traditional Document Services. Guidance for the current quarter is going to have to show the same growth in revenue generated, while indicating a return to an increased pace of growth in profitability in what should be a tough quarter for the entire marketplace. This will not be boring. 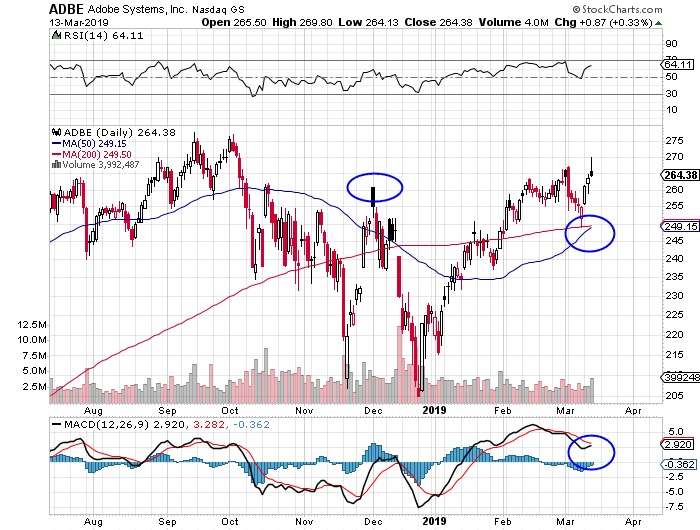 I'll tell you what I see in Adobe when I look at this chart. What's obvious immediately is the double bottom formation. I just call that a "W" but the smart kids call it a double bottom. What do we know about these types of formations? Well, we know that they form when markets are volatile. Check. We also know that they tend to be bullish, and that traders like to buy these these formations as the right side of the formation reaches and then surpasses the spot where resistance had been met after the first leg of the "W". That means roughly the $260 area here.

The idea here is that perhaps the trader can capture as much on the breakout as was lost to the downside in the first place. That's a lot of ground. The problem is that we have not seen an increase in volume that one would attribute to said breakout, and the W seems to have added a handle, which would kind of morph this into a hybrid formation, but without the kind of rounded bottom that traders like to see.

On the bright side, Relative strength is good. On top of that the 50 day SMA stands just 35 cents away from a "golden cross" of the 200 day SMA, while the daily MACD also appears likely to display a bullish crossover of its own perhaps today. Discount seekers could probably still sell puts expiring tomorrow at discounted strikes of $10 for a rough $2. If they act early.

I think this stock can trade at $300 this year. In fact, five star analyst Kash Rangan of BofA Merrill Lynch increased his target for the name to $312 on Wednesday. Rangan has been a bull on the name in the past, and in my opinion has been correct more than not. Then again, I'm long the name myself.

Get an email alert each time I write an article for Real Money. Click the "+Follow" next to my byline to this article.
TAGS: Earnings | Investing | Markets | Stocks | Technical Analysis | Trading | Aerospace | Airlines | Software & Services