Last week, we had warned that the focus would be on macroeconomics, and it was. The Fed had gone into their pre-policy decision media blackout period, for which we were all grateful. It looked like, prior to entry... that it would be a light week on the earnings calendar.

As it turned out, the macro would for the most part, disappoint, and what earnings there were, would have a profoundly negative impact upon financial markets. This would put the Fed and Fed officials front and center, regardless of their collective silence.

It all began last Tuesday with a August CPI report that showed both headline and core inflation for that month to be hotter than expected. Fact is that the core rate, on a year over year basis, came close enough to matching the peak of the cycle, which came this past March to scare those (including this guy) who had thought inflation to be well past apexing.

By Wednesday, it was Producer Prices for August that at least at the core...would print hotter than expectations on both a month over month and year over year basis. This sent futures markets, along with Treasury yields trying to price in the Fed Funds rate for the rest of the year and beyond... into a frenzy. A frenzy that also did a number on equities and commodities.

Disappointing August Retail Sales would offer no respite, while both the Philadelphia Fed and Empire State Manufacturing surveys printing in a state of regional contraction for September. In aggregate, by the time all of this macro had registered, the Atlanta Fed had revised their GDPNow real-time model for Q3 economic growth from an already shaky 1.3% down to a very weak looking 0.5% (q/q, SAAR).

Mind you that the US economy, in real terms, had already contracted for quarters one and two in 2022. My best guess is that when "they" finally get around to calling this recession, it dates back to January 2022. The third quarter now stands on very shaky ground, as the current economic contraction, in real terms, threatens to spread to nine months.

On the corporate side, Oracle (ORCL) provided a downside outlook early last week that was followed by Adobe's (ADBE) meltdown. Adobe announced the acquisition of privately held Figma, and will likely have to weaken the balance sheet to do so. The firm also provided a weaker than hoped for future outlook. Nothing however, prepared the markets for the pre-announcement of earnings and poor guidance that both badly missed their marks at FedEx (FDX) . This caused a broad call for a global recession up and down Wall Street, as this firm is considered a leader in a business (parcel delivery) that can be taken as a proxy for economic health.

The real tell last week was new post-July lows for the major indexes that undercut the lows of September 6th. This action in conjunction with the elevated trading volume for the week, that were not due only to Friday's expiration event, places the market back into a confirmed downtrend. The attempt to rally the markets that began on September 7th and apexed on September 12th, although you knew this already, is now technically dead.

Using the S&P 500 for illustrative purposes, the daily chart shows the lower low on elevated trading volume, with technical room to the downside...

There Is a Bright Side 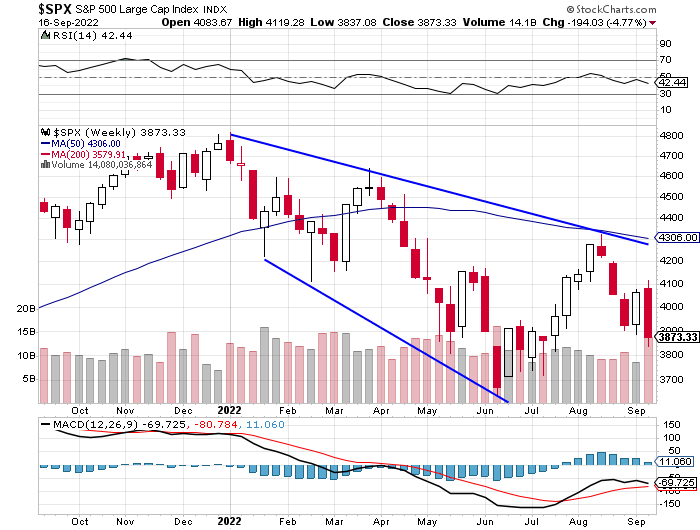 Readers will see on the weekly chart of the S&P 500, a "descending broadening wedge", possibly still in the early stages of development. This pattern takes a great deal of time to fully develop, but is considered to be a bullish reversal pattern. What is needed, at least in my opinion, is at least two trendline touches on both the top and bottom trendlines. We have that. We would prefer as many as five such touches in order to confirm.

Is a reversal guaranteed? This is the big leagues, kid. You'll get your at-bats, nothing else is guaranteed. In my experience, the eventual breakout from this kind of pattern is bullish about three quarters of the time.

The coming week is obviously going to be all about the Fed. The FOMC will go into session on Tuesday and come out on Wednesday with their first policy decision since July 27th and their last until November 2nd.

The group will also present their almost always incorrect quarterly economic revisions. Those projections are important though, even if they are often somewhat whacky and illustrate conditions at the median that could almost never coexist economically, because they still portray the thoughts, or lack thereof,  that have gone into and will go into policy implementation. As usual, the press conference, which takes place a half an hour after the Statement is released, will be as focused on as are any changes made to policy as that is where the Chair sets up the next meeting.

At last glance, I see Futures markets trading in Chicago are currently pricing in an 80% probability for a 75 basis point increase to be made to the Fed Funds rate target on September 21 and a 73% chance for another hike of at least 75 bps on November 2nd. Keep in mind that the Fed is also ramping up the liquidity vacuum (quantitative tightening program) this month. At this time futures markets are pricing in a year end Fed Funds Rate of 4.25% to 4.5% and a cycle peak of 4.5% to 4.75% in March of 2023. That would be up from today's 2.25% to 2.5%.

Of all of the corporate events scheduled for this week, there are two that I think stand out. Number one would be the Nvidia (NVDA) GTC Technology Conference that runs from Monday through Thursday. CEO Jensen Huang will get a chance to put the spotlight on his firm and what product advancements have been made. The event is heavily attended by the Wall Street community of analysts, and one would expect what those analysts put out publicly will be tradable.

Number two, I believe will be the Wells Fargo (WFC) Consumer Conference this Thursday and Friday. Walmart (WMT) . Dollar Tree (DLTR) , Target (TGT) , Chewy (CHWY) , Sysco (SYY) , and Five Below (FIVE) , among many others are expected to present.

Get an email alert each time I write an article for Real Money. Click the "+Follow" next to my byline to this article.
TAGS: Earnings | Economic Data | Economy | Federal Reserve | Interest Rates | Investing | Markets | Stocks | Technical Analysis | Trading