The end? We all know the old adage. Easy enough advice, akin to not fighting the Fed. Knowing when the trend has changed? Easier done in the rear view mirror than in real-time. Deciding whether or not "the worm has turned" is simply the difference between adding risk or seeking haven. Either time to take profits (avenue of escape), or time to get aggressive as targets of opportunity reveal themselves. Do you know when or how tensions between the United States and Iran will either escalate or abate? Do you know what kind of headlines will steal the attention of headline readers as a Phase One trade deal between the U.S. and China is made formal next week. A "wild guess" might be that once China is pressed on those items that they have never ceded ground on, that threats will once again fly.

Next week also offers the unofficial kickoff to Q4 2019 earnings season. The latest expectations offered up at FactSet have aggregate S&P 500 earnings running at -1.5% year over year, a fourth consecutive quarter in comparable contraction. That, with the S&P 500 trading at a mere 18.3 times the next 12 months' projected earnings. S&P 500 earnings for full year 2020 are still projected at growth 9.6%, suggesting a rapid and broad expansion in margin. I never say never, I just watch and try to make money based on my perception of reality. When I see something like this, with clear evidence of both rising commodity prices, as well as increasing labor costs, the phrase that rattles around in my skull through the dark hours is "We'll see." Yes, my friends, we will.

Be clear, this column is written at 03:30 every morning, based on the thoughts that run through my mind at that time. For the most part, I develop my thoughts as I work my way through Market Recon, and take anyone willing to read along for the ride. Random thoughts of a madman as the night stills, as the humans sleep? Maybe. As the one under the microscope, I prefer to think of the Recon as a stained glass window sifting the light of day as it starts to pour through so that what appears beneath might appear organized, understandable, and yet aesthetically pleasing. It is then that I might work as an artist, for we all know that while both science and mathematics remain components of the work we do, gut instinct remains just as vital a component in itself. In the end, we are but artists who can not sing nor can we dance.

Asked a week ago what investors would be focused upon this week, the easy answers would have been perhaps the CES trade show in Las Vegas that will kick off tomorrow (Tuesday), and run through Friday. That day, the Bureau of Labor Statistics will bestow their data for December's employment situation upon us. Instead, investors buy up gold, U.S. Treasuries and the VIX in anticipation of what Iran might do next.

Of our elaborate plans

Of everything that stands

No safety or surprise

I'll never look into your eyes

Surrender? Wrong guy. Key to bear in mind is this. Geopolitical threat will always be with us. Understand that fact as part of life. Part of financial life too. Keep in mind this as well. Defending U.S. lives and interests is not particular to any specific U.S. president or political affiliation. What happened last week likely happens regardless of who is president given similar intelligence. That's their job. Failure to act ahead of a threat to U.S. service people would be dereliction of duty.

As traders and investors, a year that had appeared to get off to as wonderful a start as the last year ended made a serious turn. The sobering reality is that the traditional "Santa Claus Rally" only ended one day early. In fact, the Nasdaq Composite closed on Friday above the Thursday low for that index, after markets had a chance to absorb the news from the Middle East. That said, even with the Nasdaq Composite closing down 0.8% on Friday, at 9,020 (on mediocre trading volume), the index still trades at a 4.7% premium to its own 50 day SMA (simple moving average) of 8611, and at an incredible 11% premium to its own 200 day SMA of 8,124. And even as these moving averages have been screaming higher themselves. Take a look... 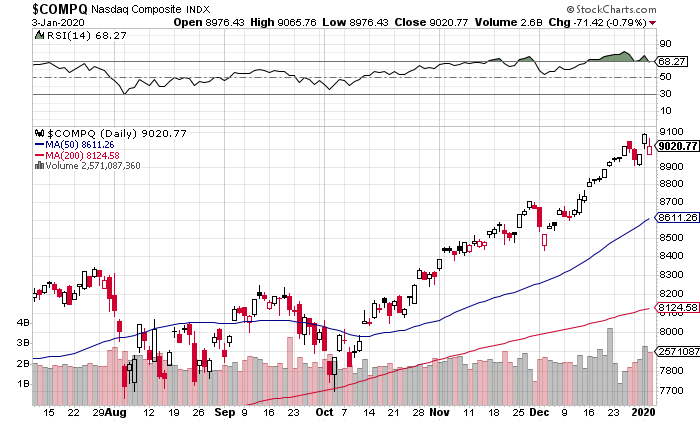 That's just too much of a premium for my liking. At least, the Friday selloff has pulled, for this index, Relative Strength below 70. The beat-down that I expect on Monday morning should help in that regard.

What the market is doing is pricing in new risk. The risk was always there. Now, more is known. What I suggest individual investors do is give their portfolios a physical. Like a visit to the doctor. Check the number of holdings. Every trader has a capacity. Know yours. Check position size. Too many eggs in one basket. You, know... there's way to correct that, and the by-product of taking such action creates dry powder as a likely volatile first quarter (a quarter that we had warned would be volatile for a while now) just gets under way. Missed the top? So what? Maybe that wasn't the top, maybe it was. I never measure myself against market timing. I measure myself though on how my names do versus my targets, and if I can pay my family's bills without the overuse of credit or unintended reliance upon savings.

Largely, there were two developments over the weekend related to the U.S. airstrike last week that took down Iranian General Qassem Soleimani in Baghdad along with Iranian supported militia leaders. First off, Iraqi lawmakers voted in support of a resolution on Sunday calling for the removal of foreign troops from that nation. Key to note here that while nobody wants to stick around where they are not welcome, that this resolution is in itself not binding, and if it were to become law, that the deal between the U.S. and Iraq requires one year's notice before U.S. troops can be expelled.

Secondly, Iran made clear, also on Sunday, that it would no longer abide by any commitments made in the nuclear accord signed in 2015. This means that Tehran will not limit the number of centrifuges used for uranium enrichment, as well as increasing research and development in that area. Other than in verbage, does this statement bear impact? Most of the planet seems to understand that Iran had already been upping stockpiles of enriched uranium. The perception was from the beginning that the accord was unenforceable.

What we think we know is that economic sanctions have placed a terrible burden on Iran, and that some at least think this has destabilized support for that nation's leadership within the population. Yes, that makes them dangerous. That's why Saudi oil production is attacked. That's why there are covert and less than covert efforts to influence other players throughout the region. That's why maritime transport in support of international commerce has become such an odyssey in that part of the world.

Do I think Iran responds? Under pressure at home, economically, and having boldly stated the intentions to, common thinking is that there will be action. Cyber attack? Probably already under way. Probably always is. Targets? I would think infrastructure. Think Federal/Military sites. Think water, think electricity. As for a military response, acting rashly would lead to a less than desirable result for Iran's military. A regional response in time one would think very likely.

Larger than that? Hey. I'll never tell you not to prepare. Fresh water, canned food ready to go. Gas in the cars? That's always. That's because people count on you, not just because there's news.

With the news cycle literally all over the "U.S./Iran by way of Iraq" story this weekend, it was easy to miss the fact that French Finance Minister Bruno Le Maire wrote to U.S. trade representative Robert Lighthizer saying, "If the U.S. were to decide to impose trade sanctions against the EU over the French Digital Services Tax, it would deeply and durably affect the transatlantic relationship at a time when we need to stand united."

What makes this story more interesting is that these taxes that will target American tech firms such as Alphabet (GOOGL) and Amazon (AMZN) , and that other European nations such as Austria, the UK, Italy, and Turkey all have plans to follow the same route. Basically, France wants to get a couple of punches in without getting hit back, and warns the U.S. against responding "disproportionately." With the rest of Europe scraping for revenue, and planning to follow the French lead on this issue, the American response to these taxes is paramount to what lies ahead in the form of another trade war, while the trade war with China has quieted but not gone away. All of this in addition to whatever you want to call the conflict with Iran, while Congress pursues impeachment in an election year. Otherwise... not much going on.

The Man in The Window

I looked him straight in the eyes. He looked right back, aping my every move. Why does he do that? Every morning. He even wears my clothes. So, I asked the devilishly handsome man in the window what to look out for on Monday. His answer covered a lot of ground, but was purposely short. All names in my portfolio. This is what he said.

(NVDA) .... Failed at resistance. Not a problem taking some off, as long as repurchased later.

Strange guy, that fellow in the window. Seriously needs a shave.

(Alphabet, Amazon, CVS, and Nvidia are holdings in Jim Cramer's Action Alerts PLUS member club. Want to be alerted before Jim Cramer buys or sells these stocks? Learn more now.)

Get an email alert each time I write an article for Real Money. Click the "+Follow" next to my byline to this article.
TAGS: Investing | Markets | Politics | Stocks | Technical Analysis | Trading | China | Middle East