Markets were quiet on Tuesday. Really quiet. A pause that refreshes? Maybe. It would appear that both the S&P 500, which was down small, and the Nasdaq Composite, which was off 0.56%, were in actual need of some sideways to lower price discovery after a robust four day run. There was no technical damage to either, and trading volume was thin. Therefore, we know that there was no broad professional distribution.

The Russell 2000, on the other hand, did pierce it's 200 day SMA from below and then sold off to the point of actually losing the level, albeit just by a smidge. This could be technically damaging, if not for the performance of the S&P Smallcap 600, which has retaken both the 50 and 200 day SMAs and then held those gains on Tuesday. Using the IShares Russell 2000 ETF (IWM) as a proxy, compare...

Beyond smaller caps, the tech sector finished in eleventh or last place on the daily performance table due largely to underperformance across the semiconductor space. The Dow Jones US Semiconductor Index may be up 51% year to date, which leads all industry specific indices within the tech sector, but that index took a 1.3% hit on Tuesday, with mostly smaller cap chip names leading to the downside. Sifting for large-caps, Marvel Technology (MRVL) and Teradyne (TER) underperformed the index itself.

Market breadth was fairly awful for the day, though as mentioned above... participation was down. There was no easily traceable move into or away from cyclical nor defensive type sectors. Losers beat winners at the NYSE by a slim margin, but much more decisively so (almost two to one) at the Nasdaq. Advancing volume comprised 40% of the NYSE composite, and 30.9% of the Nasdaq composite. Aggregate trading volume attributable to constituent members of the S&P 500 finished Tuesday 40% below the 50 day trading volume simple moving average for that index. The Nasdaq Composite based comparison closed 29% below that line.

The Cost of Deterrence

Earlier this week, President Joe Biden signed into law the $768.2B National Defense Act, which includes a 2.7% pay raise for service members. The law authorizes a 5% increase in overall defense spending and amounts to $25B more than the president had asked for. Included is $7.1B for the Pacific Deterrence Initiative and a correlative statement pledging support for the defense of Taiwan should the need arise. The package also includes $300M for the Ukrainian Security Assistance Initiative specifically, and $4B for the European Defense Initiative more broadly.

We all know that tanks, submarines and aircraft keep plenty of people employed and have become political footballs. We also all know that the future of deterrence, or if we are unsuccessful, the future of warfare lies in the ability to develop (and keep up with near-peer adversaries) effective hypersonic weapons that can fly at Mach 5 and are much more maneuverable than anything ever produced before. In plain English, we know that these weapons are currently indefensible (we can't shoot them down) and both the Russians and the Chinese are further along than we are in testing these weapons.

Currently there are two basic types of hypersonic technology under development. The first would be the boost-glide missile where Lockheed Martin (LMT) is the prime contractor. Currently, the plan is for the U.S. Army and U.S. Navy to share flight test plans to speed development so that eventually these missiles might be launched from either trucks or submarines. Northrop Grumman (NOC) supplies the rocket motors to this project while Leidos Holdings (LDOS) through a subsidiary is providing the hypersonic glide body. Lockheed is also attempting to develop an air-launched version of this weapon for the U.S. Air Force that has failed three tests so far, the most recent just two weeks ago.

Lockheed CFO John Mollard claims that annual revenue tied to hypersonic weapons could reach $3B for the firm by 2026, up from $1.5B this year, should key programs reach production. The current deal with Leidos calls for 14 gliders to be built for $342M that could lead to a total package of 124 gliders worth an approximate $1B.

The second kind of technology is an air-breathing concept that Northrop Grumman and Raytheon Technologies (RTX) have been working together on as part of a $200M contract. This program did successfully test fire a weapon back in September. The idea here is to use a rocket booster to accelerate beyond the barrier of sound before a scramjet kicks in to propel the missile to speeds beyond Mach 5. This would be the lower per unit cost option, should it work well, and should quantities be required in a hurry.

Readers will note that LMT has spiked on this news, and now approaches a 50% retracement of the entire June through November selloff. There should be some resistance at the 200 day SMA ($359), but my guess is that LMT tries to fill that unfiled gap from October that exists from $374 down to the current price. Of course, the already mentioned 200 day line is in the way, as well as the 61.8% Fibonacci level at $363, so there certainly is some wood to cut between here and there, but this is how I am setting myself up.

There is no doubt in my mind that there has been a change in trend. I expect that I will take something off should that gap fill, but I have my eyes on those June highs, as there are enough "hot spots" on this planet, and the two most often mentioned involve those near peer adversaries that we somehow let get ahead of us in the development of weapons that could alter the balance of power for generations. Seems so long ago. There was a time. People could literally disappear. Only the monkeys knew where we were, and they shut the heck up as long as we fed crackers. Science.

News broke late Tuesday. Apple (AAPL) is dishing "out of cycle" stock bonuses of between $50K and $180K to high performing key engineers as a means of retention. It's no secret that Meta Platforms (FB) has poached roughly 100 engineers from Apple's ranks over the past few months. Apple has also hired some key Meta employees.

As the "metaverse" or "omniverse" becomes the next great thing, these two firms appear to be headed for an intense rivalry as both work on major hardware releases over coming years in the areas of augmented and virtual reality headsets and also in smartwatches. What does Sarge think? Sarge likes Apple. Sarge has never liked the Facebook/Meta team, and therefore does not invest in the stock, and Sarge thinks he better hang onto his long position in Nvidia (NVDA) no matter how expensive it looks.

Yowza! At their closing prices on Tuesday, Ford Motor (F) stands with a greater market cap than General Motors (GM) . No joke. The score at those prices stands at Ford: $82.96B, General Motors: $82,92B. Am I enjoying this? You all know I have been pounding the table for Ford since it was trading in the mid-single digits. It's very hard not to like and root for CEO Jim Farley, an obvious "car guy" who has made Ford's investment in and move toward a serious place at the EV table reality. It was evolve or die, and Farley understood that. Ford's strength moving forward, as the stock has stalled at these levels, will be in successfully delivering the kinds of vehicles that people like (pick-up trucks and muscle cars) in electric format without skipping a beat. Both Ford and GM are about $10B smaller in cap size than is newcomer Rivian Automotive (RIVN) , and only about $20B larger than Lucid Group (LCID) . Incredible. 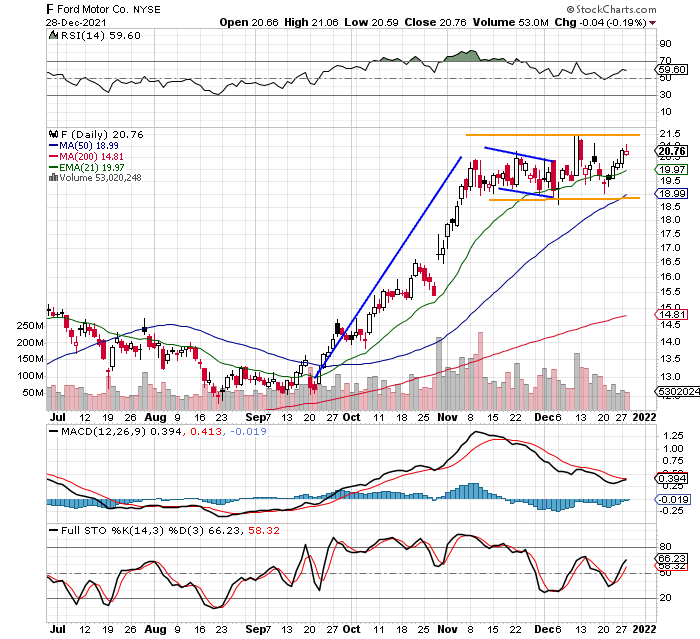 I left the "bull flag" that I thought I saw last time I wrote about Ford on this chart. Readers will note that our bull flag had turned into a much larger basing period of consolidation. What this does is move my pivot point up to $21.50. That in turn, takes my target price up to $26 from $25. I will also move my panic point up to $18 (About a dollar below the 50 day SMA) from the $14 level where it had been.

(MRVL, AAPL, NVDA and F are holdings in the Action Alerts PLUS member club. Want to be alerted before AAP buys or sells these stocks? Learn more now.)

Get an email alert each time I write an article for Real Money. Click the "+Follow" next to my byline to this article.
TAGS: Investing | Markets | Stocks | Technical Analysis | Trading | Automotive | Defense | Electric Vehicles