The S&P 500 bottomed for the day around 3,722 close to 90 minutes after the opening bell on Wednesday. The index apexed for the regular session at nearly 3,807 with 40 minutes or so left until the closing bell would peal its last. Almost as if high-frequency algorithms took a cue from somewhere and forced the issue through a semi-artificial form of momentum and then raced each other to take profits over the final 12 or 13 minutes of the session. Just look at a one-minute chart of that index over those six and a half hours...

This index, which passes for the US market's broadest large-cap measure of equity market activity, was down 1.8% at 10:30 am ET on Wednesday and ended up closing down 0.2%. The movement was even sharper for the Nasdaq Composite that moved from being down 2.3% at one point to closing down 0.25% for the session.

So, what was it? Was it the OPEC+ production cut announcement? Was it correlated inversely to movement in the US Dollar Index, the DXY, which appeared to peak around 10:30 am ET on Wednesday and bottom around 15:30 pm? Could it have been the Atlanta Fed's GDPNow model for the third quarter, which was revised from +2.4% to +2.7% on Wednesday morning?

Maybe, as Chris Harvey, who is head of equity strategy at Wells Fargo (WFC) explained, and Bloomberg News reported, the market's whole ball of wax turned on one big options trade. The trade, according to Harvey included the buying of 20K S&P 500 calls with an October expiration and a strike price of 4,500, and 14K calls with a 4,300 strike expiring in March... all while selling 48K calls with a 4,500 strike expiring in January.

Gareth Ryan of IUR Capital, who is quoted by Bloomberg, said, "The dealers who took the other side of this had a huge amount of risk to offset. It certainly could've impacted the cash market. This is one of the largest trades by size that I have seen in a long time."

Regardless of impetus... equity markets delivered the start of what I asked for 24 hours ago. I mentioned that it could be beneficial toward the definition of making a change in trend identifiable (if there is to be one) if markets could move anywhere from sideways to a minority retracement of the combined Monday and Tuesday gains prior to its next real move. On Wednesday, the marketplace presented both that minority retracement and a more or less... sideways close. Now, we need to see another day or two of this, sans the intraday volatility.

Breadth was poor for the session. Losers beat winners decisively for names listed at both of New York's primary equity exchanges. Advancing volume took a minority share across US markets, and eight of our 11 S&P sector-select SPDR ETFs closed in the red. Once again, Energy (XLE) led to the upside at +2.07%. No, there was no "sell the news" OPEC+ related event. I was wrong about that. Don't forget that trading volume was dramatically lower on Wednesday than it has been of late due to the religious holiday. Wednesday was the quietest day in terms of trading volume in about two weeks.

Treasury yields were back on the rise on Wednesday as the US Ten Year Note appeared to find resistance at the yield's 21 day EMA (Remember yield is inverse to price, so support and resistance are also flipped when discussing debt securities.)...

About WTI Crude, that product, though also dependent upon US dollar valuations, approached its 50 day SMA on Wednesday... 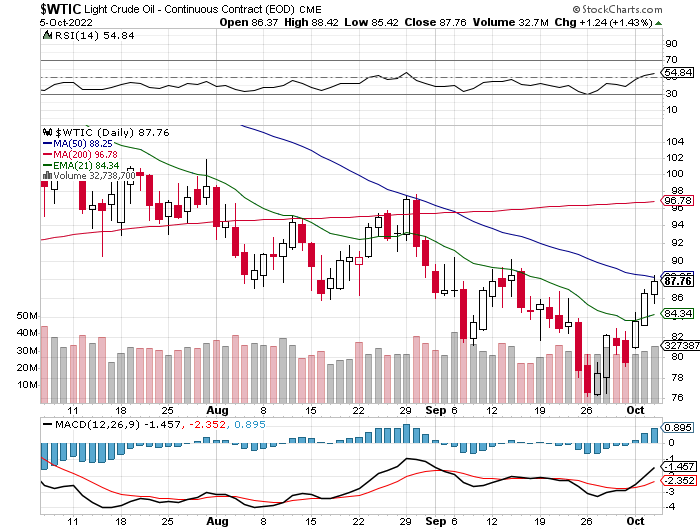 WTI Crude met resistance at this line in late August, Now, as it was at that time, relative strength is on the rise, while crude's daily MACD appears to be gaining momentum. We shall see.

On Wednesday, the group known as OPEC+, which includes the OPEC cartel led by Saudi Arabia and OPEC aligned non-cartel producers led by Russia, agreed to slash daily production by 2M barrels of oil per day, which is that group's largest cut since April of 2020 in response to a global pandemic shutdown. Certain ministers of member nations have indicated that the cartel would like to see oil prices balance at around $90 per barrel.

That this cut comes less than three months after President Biden's visit to Saudi Arabia in an effort to improve relations and keep production at a high level is being considered an affront to the west. White House press secretary Karine Jean-Pierre said, "It's clear that OPEC+ is aligning with Russia with today's announcement." President Biden directed the release of another 10M barrels from the Strategic Petroleum Reserve in November. Jake Sullivan, who is the national security adviser at the White House, said, "The president will continue to direct SPR releases as appropriate to protect American consumers and promote energy security."

Most professional estimates that I have seen expect the announced reduction of 2m barrels per day from OPEC+ to end up looking more like a reduction of between 1M and 1.2M barrels per day when all is said and done given that several OPEC nations are unable to produce enough oil to meet their own quotas.

San Francisco Fed Pres. Mary Daly spoke publicly on Wednesday. She stuck to the narrative that nearly all Fed heads have clung to in almost robotic fashion for months now. "We're data dependent. When the data show what we need to see, then we will downshift, when the data don't show it, then we're going to have to keep doing what we're doing." Daly added... "The American people - they need confidence that we're resolute." She went on... "Nimble and resolute have to go together. We're resolute about fighting inflation, getting it back down to our 2% average target, but we have to be nimble in how we accomplish that because that's how we minimize the risks of either doing too little or doing too much."

That said, there has been nothing at all that might be considered "nimble" in anything the Fed has done in quite some time. Central bank behavior has appeared panicked, and rushed if anything and has appeared in such a way as if it had been conducted by a lumberjack more so than by a surgeon.

When asked on Bloomberg TV by Mike McKee about the trajectory of forward looking policy given that futures markets trading in Chicago are pricing in rate cuts later in 2023, Daly said, "I don't see that happening at all." Lost in space. How can anyone say something like that, given that every quarter, the FOMC has to dramatically change their economic projections because on average, they have been so darned inaccurate? Despite that, you are still comfortable going out more than a full year on policy? That's really nice. That's really arrogant... and ignorant is what it is.

Remember, the FOMC was going to raise rates through 2019. They cut rates all year that year instead. The FOMC was at one time, going to stand pat on rates until 2023. Ahem. These kinds of steadfast statements in a period of ongoing uncertainty are both childish and dangerous. They have no clue. They persist in damaging their own credibility. Four more Fed speakers on tap for this afternoon.

I did not hear very much about this on Wednesday. Speaking to Taiwan's legislature, the autonomous island's Defense Minister Chiu Kuo-Cheng said... "In the past, we said we won't be first to strike, which meant we won't do it without them firing artillery shells or missiles, et cetera, first. But, now the definition has obviously changed, as China used means like drones. So, we have adjusted, and will view any crossing of aircraft or vessels as a first strike."

Since US Speaker of the House Nancy Peolosi's visit in August, an average of 10 Chinese military aircraft per day have flown across the median line in the Taiwan Strait that divides China from Taiwan. To this point, Chinese military hardware has steered clear of the 12 mile area around the island that Taiwan considers to be their territorial space. Chiu also spoke to the legislature about changing the length of compulsory military service for all Taiwanese men aged 18 or older. Currently, all that is required is four months of service. In these times, Chiu feels that a longer period is required.

(XLE, LMT, and MKC are holdings in the Action Alerts PLUS member club. Want to be alerted before AAP buys or sells these stocks? Learn more now.)

Get an email alert each time I write an article for Real Money. Click the "+Follow" next to my byline to this article.
TAGS: Economic Data | Economy | Federal Reserve | Investing | Markets | Oil | Stocks | Technical Analysis | Trading | Defense |