Sheer madness? Fake news? Just what the heck was that? Professional traders have long been aware of the dangers present when one participates in thinly traded "off-hours" markets. Not to mention what keyword reading algorithms that respond instantly to headline news have done to price discovery. For some, a lesson learned. For others, bounty.

Those of you who simply chose to watch the baseball playoffs on Wednesday evening, or just curl up with a good book and a bowl of ice cream, were likely the better for it. U.S. equity index futures plummeted early on in the evening as Asian equities and certain commodities mirrored the sharply lower prices. The catalyst seemed to be an article that ran at the Hong Kong based South China Morning Post. That piece describes trade negotiations in Washington between the U.S. and China at the deputy level as having made no progress. The piece goes on to say that the Chinese side has refused to discuss structural impediments to improving the trade environment considered to be priority items by the Trump administration. Lastly, this article indicates that high level talks would last just one day, and that the leader of the Chinese delegation, Vice Premier Liu He, planned to leave Washington early.

As if having rolled off of a cliff, S&P futures printed more than 30 points lower, Dow futures more than 300. Thursday morning was going to be a financial bloodbath. Except, for one thing. Financial Twitter, led as far as I can tell by CNBC's Kayla Tausche (who really did a great job) started to tell a different story.

Off of those early lows, they rose. Like the phoenix of Greek mythology. Asian equity markets. U.S. equity index futures. Bloomberg News reported that President Trump might be preparing to delay the October 15th deadline for increasing tariffs on $250 billion worth Chinese imports from 25% to 30%. The New York Times reported the possibility that the U.S. might issue licences to certain U.S. firms to once again engage in business activities with Chinese telecom/5G giant Huawei.

In exchange for a U.S. suspension of this next planned escalation in the schedule of tariffs, it has been mentioned across several media outlets that along with increased purchases of agricultural goods, that China may implement a formerly agreed upon currency pact. The U.S. dollar index has moved toward it's lowest levels since Monday through the wee hours of Thursday morning in response despite the fact that the index is heavily weighted toward the euro, and technically has no dollar/yuan exposure.

Asian markets have rallied all the way into the green. S&P futures markets have continued to remain volatile throughout the dark hours, but trended significantly higher, moving at times very close to unchanged. Meltdown averted? Perhaps for now, but I'm not that smart.

What I Do Think

Failure means "Cold War". A cold war is not the end, but it would divide the planet into spheres of influence that would devolve into economic and and military alliances. We've seen this movie but have never had to dance the dance with a worthy economic rival. What would that mean in the end? Obviously, I think this would slow economic activity, and thus the financial marketplace would value large cap equities at lower multiples. Then again, the western world has never gone through a cold war in an era of far looser parameters for what is acceptable both monetarily as well as fiscally.

For the time being, even if this is where we as earthlings are headed, my guess is that today is not that day. As an investor, I am still playing the "better safe than sorry" game. A manager with something to sell has to try to beat the market, creating elevated probabilities for both risk and reward. An investor responsible for feeding his or her family has much, much more at stake. Got me?

P.S.: Boosting soybean purchases by 10 million tons is akin to throwing a deck chair off of the Titanic in order to reduce drag. The Chinese side can do a lot better than that. A lot better.

Apple (AAPL) has reportedly removed an app from the company's App Store that was being used by protesters in Hong Kong to track police movements. Apple states that as the app had been used to threaten public safety, as well as target law enforcement, that it had violated both the firm's guidelines as well as local laws.

Equity markets roared back on Wednesday from two days of declines. That's the good news. The negative takeaway would be that there was that trading volume printed well below recent averages (making the rally somewhat suspect?) as observation of the Jewish Holy Day of Yom Kippur resulted in reduced participation. All 11 sectors moved to the upside, led by Information Technology on what was considered trade related optimism ahead of what would eventually be that wild overnight session.

Take a look at the Nasdaq Composite...

As this rather broad but tech heavy equity index has fallen into a game of pong played between the 50 day and 200 day SMAs since mid-September, the broader trading range has narrowed at both the top and bottom since late spring. As we see a narrowing of this trading range, one might expect a violent burst once this pennant/flag formation actually closes. Zooming out below, you will see the H1 2019 flagpole.

The promise is one of volatility. Which direction? I think that answer will come in the form of a headline, and probably very soon. The algos will let you know before you can read the news.

A) Maybe we should not read the FOMC Minutes.

A) Well, there is a lot of contradictory thought in there. If taken as simple discussion among heavy thinkers prior to making a decision, which is what it really is... then it's not so bad. If taken as the evolution of developed thought, then sort of troubling. Then again, one must always remember that the information present is stale. It's always three weeks out of date.

Q) Does "Participants generally judged that downside risks to the economic activity had increased somewhat since their July meeting, particularly those stemming from trade policy uncertainty and conditions abroad." and "Several participants mentioned that uncertainties in the business outlook and sustained weak investment could eventually lead to slower hiring, which in turn, could damp the growth of income and consumption" really fit with "Several participants suggested that the committee's post-meeting statement should provide more clarity about when the re-calibration of the level of the policy rate in response to trade uncertainty would likely come to an end." ?...or the fact that the Fed's own statistical models have shown a notable increase in the probability of an economic recession over the medium term in recent months?

A) No, these statements are in conflict. We already knew there was dissent three weeks ago. Perhaps we just have too much information available.

Q) Are the Phillies glad they signed Bruce Harper?

A) No idea, but the Nationals are glad they did.

Every fan goes through it every once in a while. Late in the game, down by a touchdown. All the fans ask is that their team has the ball on the last play, and that their quarterback can reach the end zone on a fly. It's desperate, but it means that at least the game is not over.

Bed Bath & Beyond (BBBY) threw that long ball after the closing bell on Wednesday. The firm announced an impressive hire. Mark J. Tritton would take on the positions of President and CEO, succeeding the valiant Mary A. Winston, who had served on an interim basis and will remain on the Board of Directors.

Tritton is a 30 year retail industry veteran who comes directly from Target (TGT) , where he served as Executive Vice President and Chief Merchandising Officer. Tritton was instrumental at Target in transforming that firm's omni-channel shopping experience... now considered to be quite successful. That will be the goal here as well, along with enhancing and or refining the firm's assortment of merchandise, cost structure and asset base. 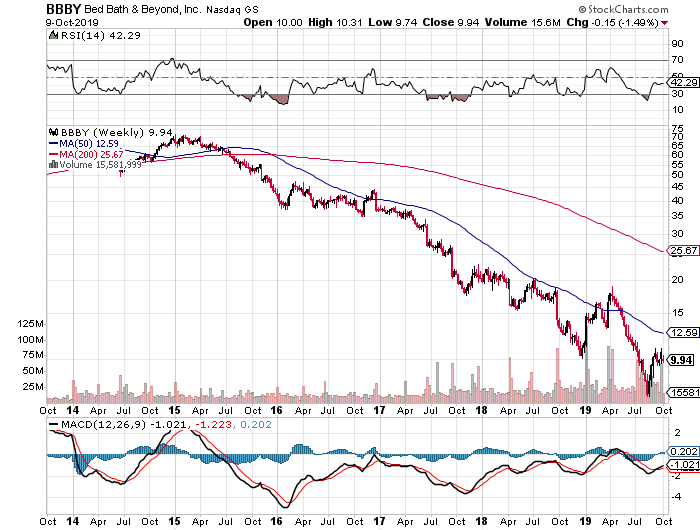 As one can quickly see, things got rough at Bed Bath & Beyond in early 2015, and never got better, until maybe right now. After closing at $9.94 on Wednesday afternoon, the last sale in zero-dark trading is $11.65, up 17.2%. That higher last sale will knock the dividend yield down from 6.8% to 5.8%. Is this positive reaction sustainable? For the medium to long term? Only if that dividend is also sustainable.

Get an email alert each time I write an article for Real Money. Click the "+Follow" next to my byline to this article.
TAGS: Investing | Markets | Politics | Stocks | Technical Analysis | Trading | Retail | E-Commerce | China | Stock of the Day