The wild side. Ladies and gentlemen, what I see might just be significant. U.S equities rebounded off of March lows a couple of weeks back. There were some positive signs, but never did I like the trading volume relative to pricing on those days, as you may recall. Yeah, I dabbled here and there, but I was willing to broadly miss the absolute market lows in exchange for not getting my face ripped off any worse than it already had been. Fair enough. I saw the market as remaining in a broad, correction... both fundamentally and technically.

On Monday, there was no disguising the newly found optimism. The virus remains in charge. On this there is no argument. That said, there have been signs that the horrible curve may finally be flattening, across Europe's hot spots, as well as across the New York metropolitan area. Maybe. We hope. Then, the return of perhaps America's most trusted banker, Jamie Dimon of JP Morgan (JPM) , to the fore. If anything, a sure confidence builder.

Large caps ran. The S&P 500, Dow Jones Industrials, and Nasdaq Composite all gained more than 7% on the day. Mid-Caps ran farther than large caps. The S&P 400 scored a gain of just less than 8%. Better than that, beleaguered small caps finally had their day. The S&P 600 and Russell 2000 both saw aggregate values rise by more than 8%. Trading volume significantly increased on Monday from Friday at both the New York Stock Exchange and the Nasdaq Composite. At 11 Wall Street, advancing volume beat decline volume by more than 9.6 to 1, while winners beat losers by more than 9.9 to 1. Up at Times Square, advancing volume beat declining volume by 6.2 to 1, while winners beat losers by 5.6 to 1. What led the way? Everything was hot. Well, everything with the exception of what had worked well over the past six weeks. Suddenly my "virus" names were cashed in as investors sought out growth stocks. No joke. The Philadelphia Semiconductor Index (SOX) tacked on a cool 10.38%. You see "the cloud" yesterday? Splunk (SPLK) , DocuSign (DOCU) , Workday (WDAY) , and Salesforce (CRM) all feasted. In fact... Hotels, Gambling, Recreation, Auto Parts, Aerospace, and even the Financials ran, but interestingly, among those financials, consumer finance ran hotter than did traditional bankers. Hmm.

What This Tells Me

Everything is now going to be A-Okay from here, Sarge? Um no. Good guess though. What this tells me at least functionally, is that there was institutional investment behind Monday's markets. Actual managers re-allocating portions of funds under their control. The bottom is in? If I knew that, I'd be a wealthier man. This is the deal, gang. The markets priced in a period of deep economic contraction, and then tried to price the duration of this period. The moves, as you well know, were extreme in their level of violence. Now, these same managers are having to price in a certain probability that the duration of this period of economic cessation might be shortened to some unknowable degree. Either that, or due to the breadth of aggression seen committed to by both monetary and fiscal authorities, a "less deep" contraction. I'm going with duration, as I think the depth is already nearly complete for some of the industries that did rally on Monday.

I make no promises. There will be terrible days ahead. We know this. We also know that markets at the headline level will take nasty hits as negative statistics relative to this virus make headlines. 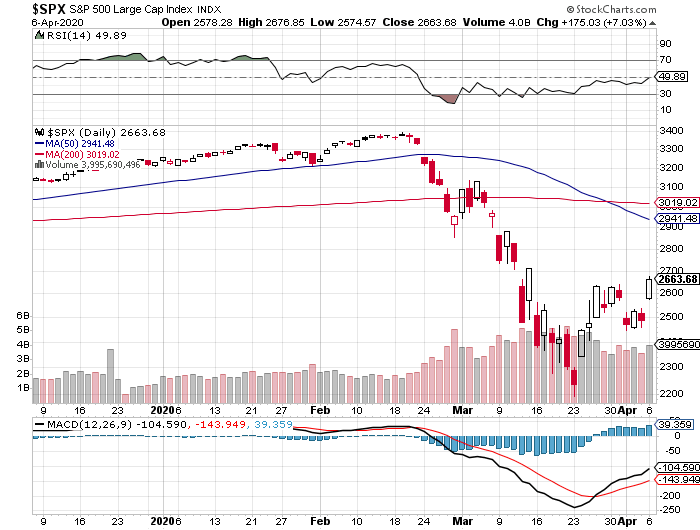 Readers will note that not only did the gap created just last week sort of fill, but that Monday created a visually apparent double gap for the space in between what I will roughly call 2540/2570. Probably not today, as equity index futures were trading well into the green overnight, but this area may have to fill on some other day... a bad day. We will still have those. Then again, that gap opening of 24 March has still not filled. I do get all that.

So, these gaps really have to fill? The one absolute thing about our sport is that nothing is truly absolute. Nothing. We are always mentally prepared to win big, and lose big. We know that at our best, our worst is just around the corner. We also know that when the world is dark that the sun will surely rise again.

Picture this... on a statistically awful day, where our political leaders appear stressed? Sure, filling those gaps is possible. How about a market that prices in a second round of helicopter money for struggling American workers put on the sidelines by their own government's necessary mandate, and then the political ridiculousness starts up again. These possibilities could/would cause sharply negative algorithmic reaction across financial markets, even if brief.

I get all that. This is why we call it "risk management." However, by virtue of my own rules, I must call this shift in market sentiment as I understand it. This market correction has in my opinion, passed into the earliest stages of recovery. From here a lot will depend on how well, and how staggered our leadership is able to reopen (keep open) various parts of the economy, while still managing outbreaks that turn into hot-spots across our nation.

This nation is far from returning to normal, and will likely never return to "the way it was" pre-Covid-19. Get over that. Celebrate small victories as they happen. Be cognizant that globalism brought with it greater revenues, enhanced margin, higher valuation metrics, but as we now know... at tremendous costs, unacceptable costs in terms of human lives as well as national security. What is precious can never again be sacrificed at the altar of wealth ever again. Never.

Speaking of sacrifice, I see so many across social media having problems with being stuck indoors. Okay, some people are not stuck indoors. You know who they are? They are doctors, nurses, paramedics, police officers, truck drivers, grocery store or pharmacy workers, and more... They have all stood tall for us. Eager to get outdoors? I'm pretty sure the National Guard needs people. Otherwise, honor thy sacrifice as an offering so that someone else might live.

Does Jerome Powell wear a cape? I'm starting to wonder, as there is no doubt that this is the most aggressive and pro-active Fed since at least the days of Paul Volcker's tug of war with consumer level inflation, not to mention the Reagan administration.

In yet another move to either fix something, or rescue something else, the Federal Reserve Bank announced on Monday that it would be creating a program that for lack of a better explanation appears aimed at propping up the recently enacted "emergency small business lending program." The new program will offer terms to back these PPP loans being rushed into a system not built for such volumes or velocity.

The idea has been to get the dough quickly into the hands of small business owners before that are forced to let their staffs go. These loans are meant to cover two months of payroll as well as other business expenses that would essentially morph into grants should these businesses maintain the size of their labor force.

Still Not Getting On a Boat

Just wow. I am sure readers saw the 20.6% move higher for Carnival Corp. (CCL) on Monday, despite the fact that sailing for pleasure is not even a business in this era of Covid-19. The Public Investment Fund, which is the sovereign wealth fund of Saudi Arabia ($320 billion in assets), known for investments in such firms as Tesla (TSLA) and Uber Technologies (UBER) , made public knowledge an 8.2% stake in CCL.

Carnival, for that matter, announced on Monday the closing of an offering of 71.88 million shares of common stock at an even $8. The firm also announced that between Monday and what is expected by Wednesday, the firm will have closed on nearly $6 billion in various notes that come due in 2023.

I wish them luck. I'm still not getting on a boat.

(JP Morgan and Salesforce are holdings in Jim Cramer's Action Alerts PLUS member club. Want to be alerted before Jim Cramer buys or sells these stocks? Learn more now.)

Get an email alert each time I write an article for Real Money. Click the "+Follow" next to my byline to this article.
TAGS: Economy | Federal Reserve | Investing | Markets | Stocks | Technical Analysis | Trading | Coronavirus

Everyone wants a flush on the Market, but here's why they aren't getting one.