The Harvest Moon. Last one of my lifetime. Probably. Not worked up about it. I'll be asleep way before the witching hour. Besides for kids like us, the witching hour that matters will come next Friday, Quadruple Witch with a dash of S&P index re-balancing mixed in. Today? Today is just Friday the 13th, so drop. Give me 50. Too slow. Now give me 75. Fill two canteens with water. Pack some clean socks. Get your gear on, and let's rock.

Don't get me wrong. I look at charts almost constantly. I am always seeing things that I can not believe that I had missed, and sometimes I see something that was not really ever there at all. Every once in a while, I get real lucky, and see a classic set-up before the pattern becomes fully developed. Those are the ones that can pay off real well... or turn against. Thursday's performance from an equity perspective might look like another up day in a series of up days to folks who spend their productive hours being productive doing something else. That said, there is no denying that markets got ugly over the last 30 minutes or so of the session.

Equity index futures are indeed, trading above fair value through the wee hours. That could have been one of those funky algorithmic responses enhanced by momentum bots that takes us a while to figure out. Guess we'll see, but there is no doubt, that with trade headlines swirling, a more aggressive (than I expected) ECB, and the Fed ready to step to the plate next week, all with markets teetering on, but not quite at what I see as technically over-bought conditions. 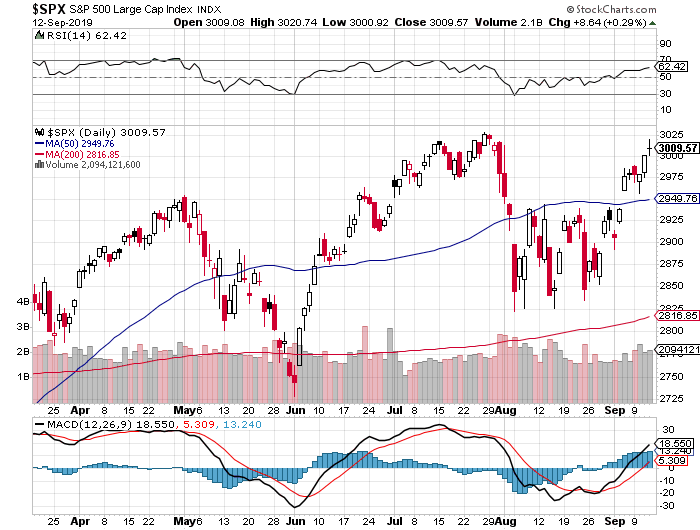 On Thursday, the S&P 500 made four attempts on the 3020 level. The Russell 2000, the recent leader among indices, made similar multiple attempts on 1580. On one hand, Thursday's market high (SPX: 3020) is probably close enough to the July 26th high of 3027 on a daily chart to call a double top if markets fail to make another run at these levels. (I think that the S&P 500 will make another run.) This would be a bearish reversal pattern, and could not be truly confirmed for folks like us until the index trades below 2825 support.

On the other hand, trading volume was notably lower at both of New York's major exchanges despite the churn... in fact far lower than on more positive trading days earlier this week. Is this itself a positive? Declining volume beat advancing volume at the NYSE, while new highs dwarfed new lows. That can make sense at the top of the chart. A whopping 62% of NYSE stocks are now trading above their individual 200 day SMAs. This kind of information could read as somewhat toppy. That said... take a look at this...

The total CBOE put/call ratio (includes ETFs, indices, and volatility) shows a complete lack of investor concern, printing well below key moving averages for a third day running. Even draining our swamp of puts and calls unrelated to individual equities, the story remains the same.

My conclusion? The market is facing stiff resistance. Actions taken by the ECB have been somewhat rejected by the marketplace. I believe that fact to be headline related and short-term. The FOMC will have to act, perhaps more measured than previously required by the yield curve, and maybe that's not a bad thing for now, but understand this... forget the market... there are only two ways to extend this business cycle. Either the Fed plays ball, or China plays ball. You get one, overt economic contraction can be delayed. You get both, Santa shows up early. You get neither... and the darkest of days are closer than you think. I think we get enough, for now. I think forward looking PE ratios are going higher. Earnings are not.

The Chinese government has an idea. How about narrowing the scope of coming negotiations to just matters of trade? Why not delay talking about pesky matters of national security, or corporate espionage? Heck, the Chinese are likely to dangle massive purchases of agricultural products (Have soybeans ever been this important?), while talking about such focus points as western access to Chinese markets and intellectual property rights.

My Thought: How nice of China to tax less the items China needs most.

Basically, if this is true, the Chinese side is taking a flyer that Americans will be short-sighted and greedy... and take the money, leaving far more important inequities in this relationship unresolved.

President Trump would "rather get the whole deal done", but allows that he would consider a limited deal. The problem for both leaders is this. Trade wars take time. Hammering out new agreements can take many years. U.S. presidents face four year elections cycles. Chinese presidents might become what the press refers to as "president for life", but even presidents for life can retire... if the economy hits a wall, if there is open unrest in the streets and if the one unconquered, and autonomous province makes a bold effort to build up their military capability in order to ensure functional independence.

Bloomberg ran a story on Thursday reporting that the Trump administration might be considering clawing back some recently implemented tariffs, while delaying still coming deadlines. The White House has denied this story, and that added to some market volatility through the day's session. While it may or may not be true that U.S. officials would like to roll back the trade war clock to six months ago or more, there would likely have to be commitment from the Chinese side on currency exchange rates, intellectual property rights, and forced partnerships as the price for access. U.S. Treasury Secretary Steven Mnuchin has been out front on these issues as priorities.

Short-term, trade headlines will exacerbate volatility. The October 15th deadline granted by President Trump is key. Should tariffs on $250 billion worth of goods imported from China move from 25% to 30% on that day after the two sides have already met, it will then be time to tape on the foil.

Incoming ECB president Christine Lagarde will take on the mantle of leadership for the monetary union's central bank on November 1st. Now, most of you know that I have been no fan of the IMF under her guidance. This is not a beat up on the Lagarde session. I think she is being put in an awful position by her predecessor. The next ECB policy decision is set for October 24h, meaning that we'll hear from the silver-tongued, outgoing ECB president Mario Draghi one more time whether we like it or not.

The European Central Bank cut the deposit facility from -0.4% to -0.5%. Understand that this cut is in my opinion "ceremonial" and will do nothing at all to improve the velocity of money. Remember the theory explained weeks ago concerning velocity. Speed in transaction must be cubed in order to sustain growth squared. Sounds good. Makes sense. True for physical objects as size and weight is scaled larger. Do economies compare? I think they might.

Where the ECB is trying to ramp economic activity will be in the open-ended (4eva) quantitative easing program, while reinvesting all maturing securities in addition to principal payments. This, while also tinkering with targeted longer-term refinancing operations (TLTRO) to try to boost lending conditions. A two-tiered system for reserve remuneration will be introduced as well. Save the banks? They better.

While one might expect these moves to pressure Euro/USD exchange rates, as well as European yields, the opposite outcome was realized after an initial knee-jerk had been digested. Why? Dissension in the ranks. Several governors were not on board with restarting the QE program, notably those from Germany, France, and the Netherlands.

My thoughts here are multiple. How does Christine Lagarde make lemonade out of these lemons? She will be forced to create havoc in order to unwind these moves once started. There should be short-term benefit related to the asset purchases. We now know quantitative easing to be less effective in producing inflation or growth in reality than such "experimental" policy ever was in theory. Demographics are demographics. We also know negative rates to have deflationary impact on massed popular behavior. I don't see a clear path to improved growth in Europe sans a a bit of external help related to global trade conditions. Money in search of not just yield, but alpha will move from Europe into the United States. How useful are historical averages in determining future valuation metrics? The infantry square was once a useful defensive formation... when cavalries used horses...before artillery became precise.

Quote You May Have Missed

"It's a number one investment priority for us. It's something that really started with Secretary Mattis. And we've just had our foot on the gas." Who said it? Incoming (Now Under) Secretary of the Army Ryan McCarthy, at his Senate confirmation hearing on Thursday. What was he referring to? You guessed it. Hypersonic weaponry. What I have been harping on here for more than a year. For those who have not been reading me all along, this is one of several key reasons behind my seemingly permanent long position in Lockheed Martin (LMT) , as well as Raytheon (RTN) , the latter long, I admittedly swapped out for the firm's intended acquirer, United Technologies (UTX) . All three are recently hot, with Raytheon breaking above a $193 pivot this week. 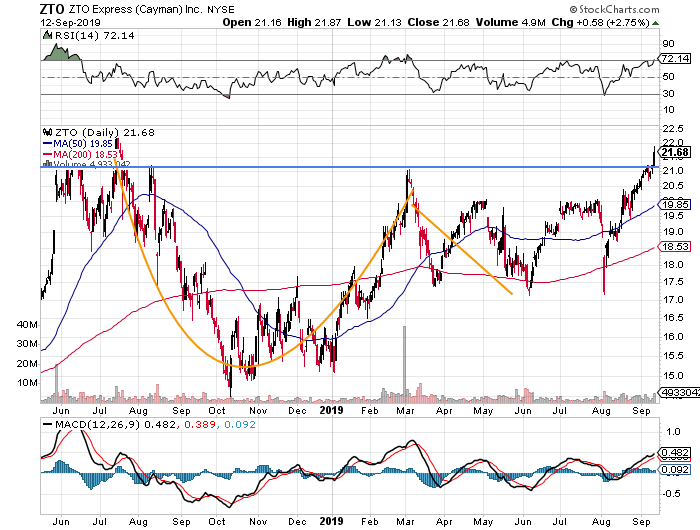 ZTO Express (ZTO) . I gave this one to Katherine Ross in an interview filmed for TheStreet on Thursday. Who are these guys? They are a Chinese delivery and logistics service provider posting solid growth in revenue and profits. Forward PE of 20 times. For me this is a September/October trade. Positive trade headlines already have the stock breaking above pivot. A lousy trade outcome means a lousy outcome for the trade. An outcome by the October 15th trade that the market likes, and I am thinking that an all-time high in the mid-$20's is possible.

Why this one? It's cheap enough for retail traders to risk in my opinion, while still fundamentally sound if I'm wrong.

There are no significant quarterly earnings releases scheduled for today.

Get an email alert each time I write an article for Real Money. Click the "+Follow" next to my byline to this article.
TAGS: Investing | Markets | Options | Stocks | Technical Analysis | Trading | Defense | China