There was more than one moment on Tuesday when I thought I felt that feeling. You know the feeling. The hair on the back of the neck. The tense feeling behind the eye sockets. A very slight bit of nausea. Precision in all physical movement. Don't need this in a short week, where one starts out with less time to find opportunity from the get-go. (The un-salaried do not love days off) Some call it "sell off mode", others hide under blankets. Though early on Tuesday afternoon there was a whiff of weakness in the air, no massive selloff would develop. They called the equity market resilient on Tuesday, and that would surely be an accurate term of description for the day.

With not a doubt in my mind, U.S. equity markets have been primed for some institutional selling. There were excuses to be had aplenty, if portfolio managers were looking to take profits. The first reported case of this scary sounding Wuhan coronavirus to be confirmed within the U.S. Boeing (BA) weighed upon blue chips and aerospace names as the firm once again had to push out its own timeline for the 737 MAX aircraft to return to commercial service. The impeachment trial of President Trump getting underway in a very contentious setting on the U.S. Senate floor. Each one a good reason all in itself if these managers were so disposed. The verdict? They are just not ready.

Oh, there was some weakness. The cream that rose to the top, was strictly defensive in nature. Four S&P 500 sectors closed out the day in the green... Real Estate, Utilities, Staples, and Health Care in that order. Of course that had more to do with the compression of the U.S. 3 month/10 year yield spread than anything else.

Remember, as I have written you, while tracking this spread versus the S&P 500, the correlation has eased up a bit, yet this spread remains firmly in control of day to day sector allocation.

Softness was experienced across both commodity dependent industries as well as those more reliant upon global economic (Chinese) growth. Energy led the way lower, as Industrials, Materials, and Financials (in direct response to the above spread) followed. Trading volumes across both major exchanges as well as attributable to both of our broader indices remained elevated. The increase in trading volume does not right now appear to be related to market direction. Isolating the Nasdaq Composite, trading volume in aggregate of constituent firms has closed above the trailing 50 day SMA for that index for (get this... 14 consecutive trading days... nine up days, five down days).

Speaking of resilient. Yes, I know that shares of Boeing have moved almost 30% lower since peaking roughly 11 months ago. My thought is that the stock has been quite resilient when all is considered. Trading in the shares was halted on Tuesday. News pending. They would reopen lower, and trade in a very wide range for the day. More bad news? The firm's new estimate for the FAA's signing off on returning the 737-Max to commercial skies has been pushed out until summer, June or July?

Is that really that bad? Perhaps, stay with me... this is a positive. Perhaps this is actually a breath of fresh air, because maybe... just maybe this is realistic. With a new top dog, President & CEO Dave Calhoun, there has been an overt effort, at least in my opinion, to appear more transparent as the firm works its way back from a difficult period. So, pushing out estimates that started out (this time) in Q1 2020, until late Q2, early Q3 actually sounds like a reachable goal, and this time for not just re-certification, but global regulatory bodies to go through their process of due diligence once the FAA gives their "okay." Then, one would think that there will have to be training for pilots and crew that may be fairly stringent, and rightfully so.

Not that I am now in love with Boeing. I have avoided the name for quite some time. The June/July timeline, if trustworthy... would return this name in my opinion to "somewhat invest-able" as a speculative play. This time back, if met, easily makes Boeing's commercial fleet available to meet potential Phase One trade deal with China related demand. Remember, China is going to have to purchase more U.S. manufactured goods than anyone in the U.S. probably ever thought they could sell on semi-short notice. Boeing actually makes big, expensive stuff here in the U.S. Marriage made in heaven if demand (and timelines) can be met.

Suggestion. McDonnell Douglas merged with Boeing back in 1997. Boeing, after making necessary changes to the 737-Max aircraft, could revive the McDonnell Douglas brand, and instead of slapping a letter or two on the 737-Max moniker as a suffix, re-designate the aircraft the MD-14 or something to that effect. Just a thought.

Think the good folks won't buy that idea? I had someone who I thought of as pretty "with it", ask me "Who's this guy?" as the case for impeachment was made on television from the Senate floor on Tuesday. The speaker at the time was Rep. Adam Schiff (D-Cal). I was stunned. Those good folks are paying less attention (to everything) than you think.

Took a little trip to my favorite store on Sunday. Parking lot packed. Had to park far away. Aisles clogged with carts. Every register lane open. Long lines. Still, a pleasure I can't describe. The family had simultaneously run out of just about everything common to daily life in suburbia in the year 2020. Your pal paid a visit to his local Costco (COST) store, and spent more in one visit than he ever had spent before, when not spending a large amount on one single item. Man, I love paper plates, laundry detergent, and Cheerios. Good living for good folks.

These shares, at up 6.6% year to date, after Tuesday's 2.8% spike are not only one of my better performers in 2020, the shares are easily beating the market (S&P 500 +2.8% ytd), and the sector ( (XLY) +1.7% ytd). You would also recall that Costco's stock sagged into year's end as the firm missed on revenue expectations for the third quarter, the firm's annual report mentioned risks associated with the condition of trade with China, and investor hopes for a special dividend faded.

My, how things change. Even if many tariffs have been left in place, the Phase One trade deal does less harm to the consumer than what had been anticipated, while substantially improving the level of dialogue between the two nations. Costco reported comp sales of +9% for December, while much of the retail universe was stuck in neutral, or worse. Now, the extremely highly rated Rupesh Parikh of Oppenheimer speaks up. Parikh downgraded COST to "Perform" in mid-September from "Outperform". The shares then proceeded to trade sideways for almost four months. On Tuesday (yesterday), Parikh took COST back up to "Outperform", while taking his target price to $335 from $300. Parikh also reestablished this name as a "top pick." In addition, Parikh also reignited interest in a special dividend, mentioning that he has been expecting one "for multiple quarters now." Hmm. 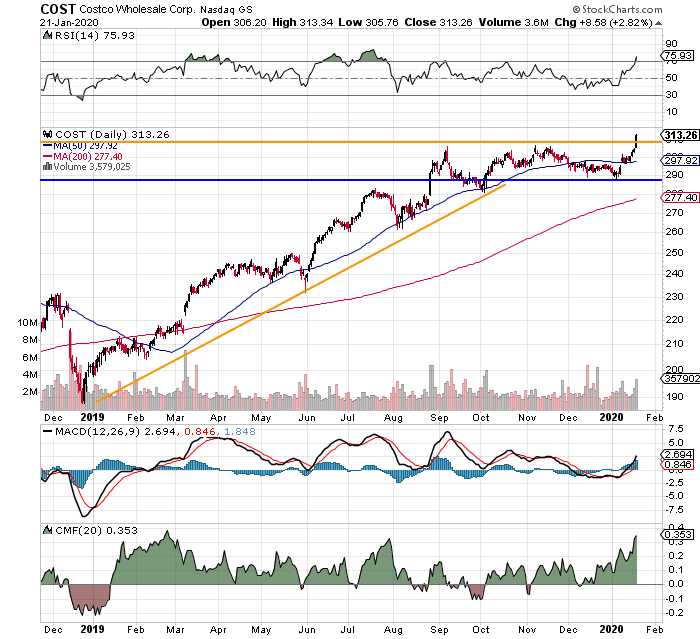 What do I see here? For one, persistently positive money flow. For another, Relative Strength has returned to elevated levels for the first time since mid-2019. After cracking the 50 day SMA to the upside in early January, that line has now offered support. More important than all of that... the shares closed out an ascending triangle without the expected explosion of directional volatility expected. Instead, the shares traded sideways for four months, basing, or creating a period of consolidation. That can be healthy.

On Tuesday, the shares broke through resistance that had been tested and held on several occasions throughout that time frame. Significant? I think so, but I am biased. I own the shares. Take a look for yourself. I would love to see a test of $307 from above and support then show. That would be optimal in my opinion.

Get an email alert each time I write an article for Real Money. Click the "+Follow" next to my byline to this article.
TAGS: Economy | ETFs | Investing | Markets | Options | Stocks | Technical Analysis | Trading | Aerospace | Retail | E-Commerce