No, this opening is not necessarily about markets. The year was 1980. I was still cool, but the U.S. economy was in awful shape. The Cold War, I mean the last Cold War was still a big part of public consciousness. Ozzy Osbourne, Bob Daisley and the late, great Randy Rhoads wrote a little tune that probably was just about 39 years ahead of its time. To learn how to love and forget how to hate. Think on that today... but mean it, don't blame the other guys. Why? When one points a finger at someone else, three fingers point right back the other way.

"Crazy, But That's How It Goes

Millions of People Living As Foes

Maybe It's Not Too Late

To Learn How To Love and Forget How To Hate"

Equity markets stabilized. The broader indices seemed to go nowhere on volume lighter than the day prior. Most importantly, at least for now, is that institutional selling has clearly abated since Tuesday, as both sides of the trade conflict talked a better game, and as the ongoing attempt to impeach the President in the House of Representatives clearly is not considered a market story. That has left that day all by itself on the chart. I'll tell you what, cowboy (speaking of the Cowboys, gee whiz)... we get out of this week with Tuesday's action still presenting in isolation, still looking like the island that we discussed 24 hours ago, that's a real positive. That supports the ongoing multiple expansion these that we've been touting for much of the year.

The bottom line, gang, is this. All price is not necessarily truth, but all price is indeed fact. Price in its purest form is simply a human response to conditions of natural surplus and scarcity. Is anything more authentic? The equation grows hair, and becomes more complex as layers of artificial manipulation are added to mold that human response, think policy, think regulation. Then through the advance of technology that human response itself becomes not the gut reaction to the need for decision making in real time, but the result of planning by those with an edge in speed of execution.

All of this change in what might artificially impact the point of sale occurs at a time where there has been a clear reduction in available equity due to mergers and acquisitions, due to large-scale corporate repurchase programs, and due to a decreased interest in private businesses not in need of capital infusion from entering the public domain. That is called scarcity, my friends. The other side of the coin is different. As the number of exchange traded vehicles has multiplied, as the number of funds bearing strategies that might have never been thought of years ago has proliferated, the demand side of the marketplace has grown significantly. All the while, through the already mentioned forces of policy, investment types that compete with equities are forced to appear less attractive.

That is fact. This is why truth matters little. This is why historical metrics used for valuation comparison are not helpful in determining proper real-time equity valuation. This time it's different? The truth (and I mean truth) is that this time exists in a different environment. This is not a lab, and this is not science.

Incredible. I am guessing that most of you saw the poll of likely voters taken prior to Thanksgiving for the Financial Times and the Peter G. Peterson Foundation that showed 61% of Americans said that performance in the stock market had little or no effect on their financial well being. It gets worse, only 40% even knew that broader equity markets are higher this year, and 18% thought markets were lower.

Awareness of year to date market performance breaks down as one might expect by income level, but also by party affiliation which I find incredible. While 58% of Republicans were aware that equities had increased in value in 2019, and I think that number is astoundingly low, however only 25% (25% !!!) of Democrats are even aware that markets are higher. How in the world?

Listen, I know that markets have been wildly volatile and connected to some negative headlines during the formative years of some younger folks who watched their parents struggle mightily (and then struggled themselves though a decade of lower wage type methodical growth in employment), but one can not get ahead, in my opinion, unless one actually enters the arena.

Some folks may not realize that through employment related pension or 401K plans that they do indeed have a stake in the market's performance, and plenty of folks may be struggling too much to invest anything at all. I do get that. I have been there. Honest. That said, I have traded my own portfolio since I was 13. My father taught me all about PE ratios and simple technical analysis while I was still in elementary school. There were other kids in the playground who talked stocks in a working class neighborhood in Queens. Nobody came from means. Now, suddenly it becomes clear that one generation has not taught the next how to defend themselves. We are going to have to teach multiple generations at once.

Why Is This So Amazing?

According to the St. Louis Fed, the US personal savings rate was 7.8% (of disposable income) for October, and has generally held above 7.5% since January 2018. That's almost two years, gang. Outside of a spike in 2012 that was shorter in duration, this is the longest sustained era of Americans saving this high a percentage of their disposable income since 1993. 1993!

Are markets scary? Yes. So is sleeping in the jungle. So is crossing a busy street. So is boarding an airplane. If one saves 8% of their dough, and they don't even know that the markets have offered every one of them an opportunity that was their's for the taking simply by paying attention, while their savings accounts are paying them something in the neighborhood of 0%.... then no wonder they're so miserable.

I have to wonder if the advent of increased exposure to technology has something to do with the incredibly broad lack of situational awareness. I mean, I know that we have all had to fight like heck in order to keep our attention spans from shrinking. Perhaps the expansion of the news cycle to 24 hours has turned folks away from the news completely. Perhaps it was the death of the printed word... on paper... without temptation to click on something more interesting that did us in.

We have our work cut out for us, for none of us wins alone. We win as a unit, or not at all. Might be more than we bargained for. Then again, if we don't help others, just why the heck are we here?

Quick thought... if the U.S. is the World Bank's largest contributor, and the U.S. taxpayer is the government's largest contributor... and the U..S is currently engaged in trade negotiations with the Chinese where the Chinese clearly resist giving up on less than fair activities, then why the heck would the World Bank plan to loan China more than $1 billion per year through 2025?

Huh? We are talking about a $13 trillion economy, the second largest on the planet. So, $1 billion? At your expense? At mine? I don't think so, sport.

Does the macro even count with the Fed on the sidelines? Well, actually at $60 billion per month, the Fed is hardly on the sidelines. Remember, we are okay with short-term rates being anchored. That's a positive. This increases certainty. It was just a year ago that this crew tried to walk and chew gum at the same time. Even moving in another direction, I don't think we ever want to see them try that again.

On Thursday, Bernstein analyst Mark Moedler (5 stars) reiterated his 'Outperform' rating on Microsoft (MSFT) , while increasing his price target from $167 to $174. In short, Moedler sees margins rising at Microsoft's commercial cloud offerings, and Azure in specific. Moedler expects increasing margin across the cloud to take margins higher for the Office suite as well the Dynamics software for business. 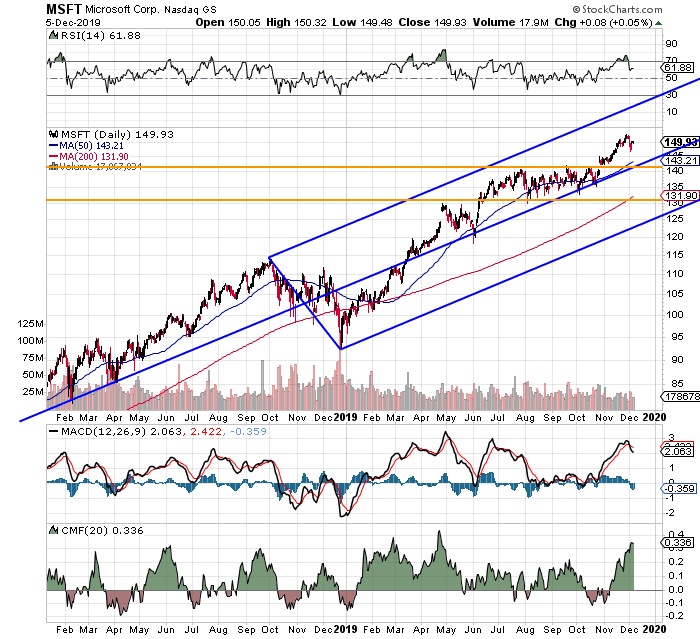 As readers will note, Microsoft shares have remained comfortably within the upper chamber of our Pitchfork model, even while Relative Strength, and the daily MACD have turned less positive. I look for support to the 50 day SMA (143), and will not worry until I see failure there.

Another Sarge name, Advanced Micro Devices (AMD) made headline news on Thursday. Robert Baird analyst Tristan Gerra (5 stars), who was not such a fan in the first place, reiterated his 'Hold' rating, but increased his target price to $40 from $30. Traders should note that the shares peaked close to $42, and closed at $39.62 last night, so Gerra "unofficially" removed what amounted to a 'Sell' rating in my opinion.

Gerra sees AMD as probably fully valued at current levels, though Gerra does think that the firm might continue to take market share away from Intel (INTC) . Interestingly, this analyst rates Intel as a 'Buy' with a price target of $70, which is 24% upside from the last sale. 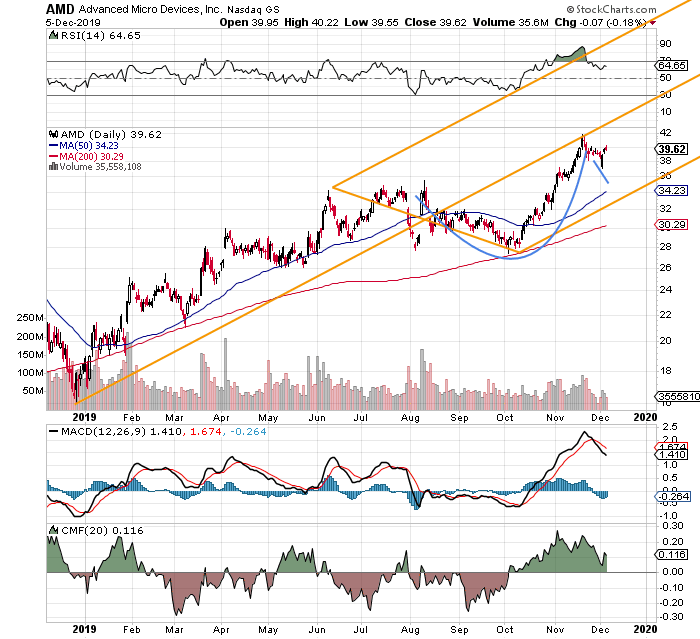 One might note that I tried to make a cup with handle pattern work on this chart, but that is really just not there. However, the stock at least for now does appear to respect my Pitchfork. My target price for this name has long been $42, which is where it met resistance. Should have taken more off. Still might. This one requires focus.

Get an email alert each time I write an article for Real Money. Click the "+Follow" next to my byline to this article.
TAGS: Economy | Federal Reserve | Investing | Markets | Options | Politics | Stocks | Technical Analysis | Trading