The Best Of Times

Sure. You made some dough. If you run a net long book, which is probably most of us. Taking early profits seemed smarter after the fact than it was at the time, as equity markets sold off, then rallied late. Just how constructive was the Monday session? A whole lot better than a punch in the gut, or even than a plain vanilla selloff for that matter.

Interestingly, both the Russell 2000 (small caps), and the Dow Transports both lagged the broader indices, meaning to me that the "Trade truce with China trade is not really about a renewed faith in reborn economic growth." Treasuries did not move significantly. One quickly sees that the inverted spread between yields offered between 90 day paper and that of the U.S. 10 year note has worsened over the past week, staying on trend after hitting resistance at the 50 day SMA in mid-June.

Yet, even if not about overt economic growth, trading volumes were in my opinion, solid. Yes, volume was noticeably lower from Friday, but Friday was the day of the Russell Reconstitution, so... "apples and oranges?" Volume in NYSE listed securities printed for Monday at a 12.4% increase over the Monday prior, and for Nasdaq listed securities... 7.7% higher than last Monday. Given that the Monday prior came in the wake of a "quadruple witching" Friday itself, this may be closer to an apples to apples comparison.

Our broadest large cap equity index - the S&P 500 - did close at a record high, even if off of the intra-day highs. Is there a need for some consolidation here? Safe to say. the market remains in a confirmed uptrend. Monday's gap is not especially large, but could still needs to fill. The index closed 82 points above it's own 50 day SMA, and has remained above that moving average for about three weeks. The distance between the average and that close does concern me. 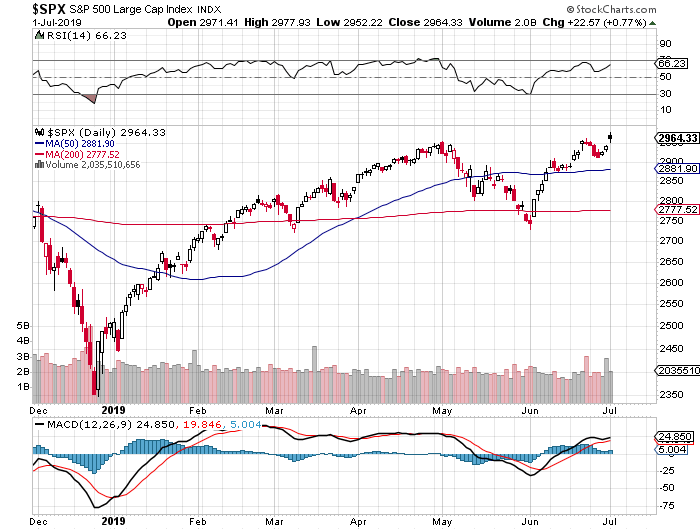 Citigroup (C) and JP Morgan (JPM) go to the tape in two weeks when the carnival begins anew. Estimates are truly all over the map. That said, FactSet has been consistent. Consistent in tamping down expectations for not only these upcoming Q2 corporate earnings, but for Q3 as well. Simply put, markets must trade lower if not for the increase in valuations that I have been speaking on, and writing about for some time now. With forward looking PE ratios (for the S&P 500) now at just 16.6 times, there is plenty of room for expansion. The five year average for the index stands at 16.5 times, so literally right there. Oh, but that five year average includes oodles and oodles of easy money you say. The 10 year average is more like 14.8 times. To that, I say that you are correct, but that 10 year average would have to include the worst of times, my dear Dr. Alexandre Manette. Might I suggest that we not consider historical measures for valuation at all, and trade the environment at hand. That said, futures markets trading in Chicago are still pricing in a 100% probability for a 25 basis point reduction to the Fed Funds rate on July 31st, a 72% likelihood of a second such cut in September, and a 55% chance for a third reduction in December. That's your environment. Friday's jobs data, with many traders off to area beaches, will impact that environment.

Your current U.S. economy is now 20% larger than it'a pre-financial crisis peak. Now that this economy is in it's 121st consecutive month of growth, surpassing the 1991-2001 period in terms of length, is the expansion on borrowed time? Is this expansion elderly? Or is this expansion still youthful, as in terms of growth, it has underachieved? According to RBC Capital Markets (which I found in the Wall Street Journal), that expansion of the 1990's ran the economy to levels 41% larger from bottom to top. Could be that we're only half way there? 5th inning?

Coming out of Osaka, China seems to be talking the right talk. Premier Li Keqiang, from Dalian early on Tuesday morning, indicated that China would speed up the timeline for opening up it's domestic financial sector to foreign investment, so that such flows would be possible by 2020. While Li spoke of futures markets, and securities directly, he also inferred the idea of potentially easing restrictions across a number of service related businesses.

My quick two cents? China is probably worried about reaching the low end of their 6% to 6.5% target for GDP. Of course they'll seek foreign capital investment. To actually get it, though, they may have to prop up the yuan, which could leave a nasty mark on the trade balance in addition to whatever is agreed to in order to keep the U.S. happy. Ahh, decisions, decisions.

With trade negotiations between the U.S. and China just reopened, and certainly still a long way from reaching anything resembling a settlement, the office of the U.S. Trade Representative proposed a list of "additional products for tariff countermeasures" in response to European Union (aircraft related) subsidies. On the list are 89 items that include foodstuffs, as well as chemicals and metals with an annual trade value of roughly $4 billion.

This addition to the already existing list of items exported from the EU to the U.S. brings the total export/import value of goods under consideration for tariffs to $21 billion. Not gigantic, but neither is this inconsequential.

The media may latch on to this story, I would not waste my time as a trader. The implication of these tariffs would be in response to a ruling at the WTO, as the U.S. has accused the EU of providing subsidies to Airbus (EADSY) , and the EU has accused the U.S. of providing subsidies to Boeing (BA) . The case has been bandied about before the WTO for the better part of 15 years, and is not the opening of a new front in the trade war, at least not in my opinion.

Ever hear of TAL Education Group (TAL) ? Maybe only in passing. I have no position in the name, I just came across the chart doing my homework in the middle of the night, and found it interesting enough to share. The name has displayed consistent earnings and sales growth, but at 39 time forward earnings, may have gotten ahead of itself. Oh, did I mention, this is an after school tutoring service targeting grades K-12, currently operating 676 learning centers in 56 cities.

I like the fundamental picture. Sizable cash hoard versus a comparably light debt load. Healthy sponsorship. Robust management interest. Earnings are expected to contract in 2020 before getting back on track in 2021, without really missing a beat on sales. That's important. Technically, the shares are acting like they want to go somewhere. Take a look. 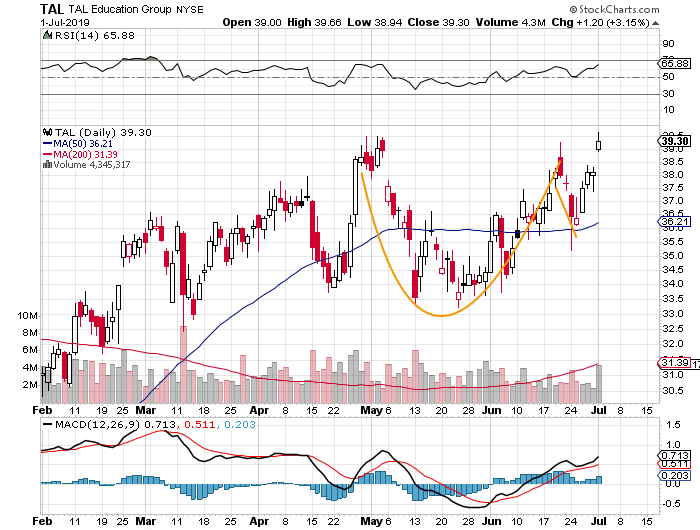 Amid a backdrop of solid Relative Strength, and a good looking daily MACD, this name trades at the top of the chart, you say. You're right, I say. What I see is a classic six week cup with a handle 10% deep that has provided a rally that is now (right now) hitting pivot. Remember, our pivot is the peak of the right side of the cup. This spot either acts as resistance, or as a catapult. How do we know which? We don't for sure. That's why this game is hard.

Here'e my idea. I think I might grab a few of these today if I can get then close to last night's close. What I am going to do, if I get these on, is target the highs of last June... 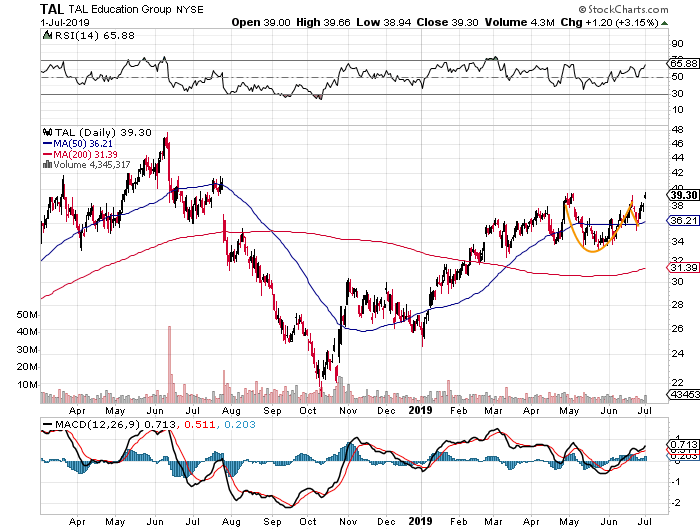 (Citigroup and JP Morgan are holdings in Jim Cramer's Action Alerts PLUS member club. Want to be alerted before Jim Cramer buys or sells C or JPM? Learn more now.)

Get an email alert each time I write an article for Real Money. Click the "+Follow" next to my byline to this article.
TAGS: Economic Data | Investing | Markets | Options | Stocks | Technical Analysis | Trading | China | Earnings Preview