Possibly you noticed April Retail Sales? It you happened to miss them, they were quite awful. Scroll back, past April Industrial Production (also awful), and voila! You've found it. Hey, look at that. With headline retail sales printing at -0.2% month over month, somehow even with non-store retailers printing in contraction (That's e-commerce. This hardly ever happens.), Department Stores hit the tape in a state of growth... +0.7% m/m. That growth beat every other line item with the exception of gasoline. Hmm. How odd.

Prior to that, Macy's (M) went to the tape with the firm's Q1 results. I have often traded that stock, with some pedestrian success. Drawn in like a moth to the flame by that gargantuan dividend yield. I watched Macy's in New York City the other day. I watched for a while. Nobody walking in. Nobody walking out. Must have been a bad day, because comp sales on an owned and licensed business actually improved 0.7% for the quarter. Not a strong number for anyone else. Better than expected for Macy's.

What's the headline? Macy's beat adjusted EPS expectations by 10 cents. Revenue was a bit light, and decreased year over year. Gross margin met expectations, as did Operating Income, but both were indeed down from where they were last year.

The firm stands by full year guidance laid out several months ago, expecting a flat revenue number that produces EPS for 2019 that lands between $3.05 and $3.25. The firm still expects comp sales to land in a range spanning growth of 0% to 1%. Do I buy the shares on this report? CEO Jeff Gennette sounded optimistic. "Our brick and mortar sales trend improved sequentially in the first quarter, supported by the Growth50 stores and Backstage. We had another quarter of double-digit growth in our digital business, and mobile continues to be our fastest-growing channel."

Cash is down both sequentially as well as year over year. Receivables are lower. Inventories are higher. On the books, that's an asset. Let's hope so. Long term debt is down small, which is a positive. A $2.8 billion long-term lease liability has shown up that was not there before. I really see the dividend payment as the only reason any investor would want an equity stake in this name. Macy's is not going to take e-commerce away from Amazon (AMZN) , and even as they resort to discounting, they will not take the working class consumer away from Walmart (WMT) , Kohl's (KSS) , and Target (TGT) .

Just my opinion, but with the trade war with China reaching incendiary levels, this may be a good time to not only avoid adding new retail industry, but hedging existing longs that traders are looking to hang on to.

An Optimistic Trader Could.... (in minimal lots) 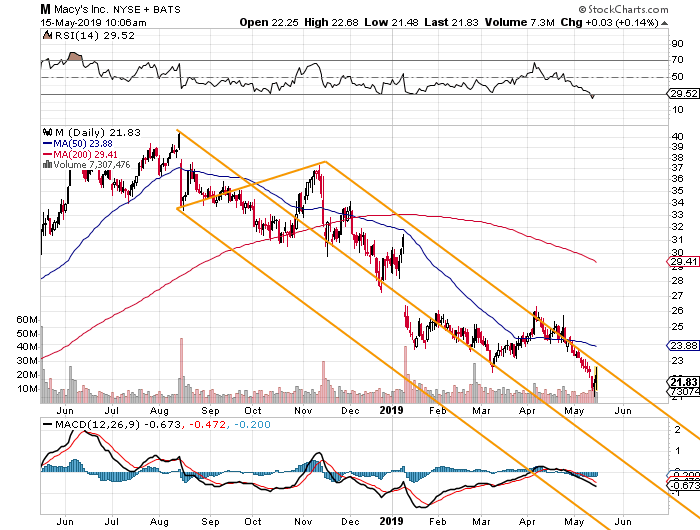 Basically, the trader is being paid $92 to take on some discounted risk. The shares go higher? The trader can exercise the right to pay $22 in August (Q2 earnings are due in August). Should the share price erode over the next three months, the trader could buy back the puts, or be committed to paying $21 for 100 shares and $20 for a second 100. Worst case leaves that trader long 200 shares at a net basis of $20.04, with the shares trading below $20.

(Amazon and Kohl's are holdings in Jim Cramer's Action Alerts PLUS member club. Want to be alerted before Jim Cramer buys or sells AMZN or KSS? Learn more now.)

Get an email alert each time I write an article for Real Money. Click the "+Follow" next to my byline to this article.
TAGS: Earnings | Investing | Markets | Options | Stocks | Trading | Retail | Stock of the Day

You Can Keep Circling H&R Block, but Don't Park Your Money There Yet

The charts of HRB are weakening ahead of Wednesday's earnings.