That Julie Andrews sure could sing. Maybe, let the tape roll in your head right about now. That might be the only way to get this medicine to go down. For the firm's fiscal third quarter, Macy's (M) reported adjusted EPS of $0.07, beating expectations by three cents. This is still earnings growth of -74%. You may recall that Macy's posted earnings growth of -60% for Q2. I don't think that I can add anything intelligent here, so moving on to sales...

Q3 revenue landed at $5.17 billion, a nasty miss, and -4.3% year over year. Same store sales dropped 3.5% versus expectations of -1%, but don't worry, there are reasons. Plenty of reasons. CEO Jeff Gennette stepped to the plate: "Our third quarter sales were impacted by the late arrival of cold weather, continued international tourism and weaker than anticipated performance in lower tier malls. We also experienced a temporary impact on our e-commerce business due in part to work on the site in preparation for the fourth quarter." Oh boy.

Let Us Count The Ways

So, let us talk about the four reasons offered up for what looks and smells an awful lot like poor execution. By the way, I ventured into the Macy's on 34th Street last week in order to check on the traffic. I wasn't alone in there, but I was closer to alone then I thought I would be. So, on to the four reasons laid out...

1) Late Winter? According to the Census Bureau, sales of clothing and clothing accessories in general have been lower month over month for consecutive months, and stand -2.7% year over year. According to the Bureau of Labor Statistics, consumer prices for apparel are now -2.3% year over year. I don't know about the weather, but the environment that Macy's lives in is far tougher than it used to be.

2) International Tourism? Travelers? I saw them, they were at Target (TGT) . All kidding aside, global economies have been tough and dollar valuations do not help there. With a flagship location in the heart of New York City, this problem is exacerbated. Still, U.S. consumers are working and for the first time in ages, are actually saving money. Reach them. Adapt. Overcome.

3) Weak Mall Traffic. Really? Nobody saw this one coming. You've got to be kidding me.

4) Work on the Website. Again. Really? I go through a lot of corporate press releases. Sometimes I scan through them if I am in a rush. Did I miss a lot of this at the competition?

Whoa. Buckle your chinstraps. This article is about to get real ugly, real fast. Macy's now looks for full year same store sales to end down 1% to 1.5% versus former expectations of flat to up 1%. Full year sales growth is now expected to post at -2.5% to -2.0%, down from former guidance of flat, and Wall Street expectations of -0.5%. However, and this is key, Macy's though obviously in decline, remains a profitable business. This is a business in need of strategic change, not a garbage truck driving off of a cliff. 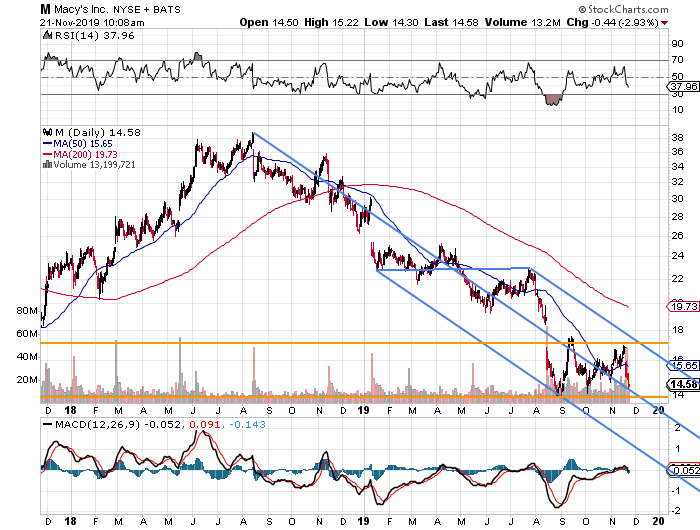 There are two things going on here. One, the action remains within the downward sloping Pitchfork that is now a year and a half old. Two, thus stock has based since August. It is imperative that this stock does not break below the $14 level and stay there into the holiday season.

I do have a long position in this name. Macy's is part of my dividend book. Keep in mind that if the firm can maintain the dividend at the current annual rate of $1.51, that's more than a 10% yield this morning. Those in this name for income rather than growth need to remain cognizant of the fact that the firm did on October 25th announce a quarterly dividend of $0.3775 to be paid on January 2nd to shareholders of record on December 13th. At the last sale that I see, that makes up for much of today's loss. Sarge, it's down from $17 a week ago. Well, congrats if you sold it a week ago.

Why I Don't Think I'll Sell These Today

February 5th, 2020. What's that? That day, Macy's hosts an Investor Day at the New York Stock Exchange. The firm plans to share their growth strategy and discuss their three year plan that day. In front of people they hope will invest in the stock. At the globally recognized hub of capitalism. With the media in attendance. My guess is they come up with something better than website problems.

Get an email alert each time I write an article for Real Money. Click the "+Follow" next to my byline to this article.
TAGS: Earnings | Investing | Markets | Stocks | Technical Analysis | Trading | Retail | E-Commerce | Stock of the Day

Jim Cramer: Where's the Tech Bottom? The Stocks Will Tell You

Can you buy Tesla, Spotify, Zoom? Each is a different story, so let's look at tech stocks and how they're moving as we go into the reopening.