Upon occasion, usually when I have reason the be at the Nasdaq Market Site, instead of grabbing a subway downtown and riding all the way to Times Square, I'll get off at Penn Station and walk the last 10 blocks. Why? So I can detour through the Macy's (M) flagship store on 34th Street. Especially at this time of year. Just to check on foot traffic. I went ahead of the Thanksgiving holiday, and again last Friday night. Not really that impressed, gang.

The crowds are just not what I think of as holiday season crowds in this neck of the woods anymore. No problem moving around on the sidewalk, or even in the store. Not used to that. You kids know that I got myself Long some Macy's ahead of the season, not because I love the store. There's one in the mall near my home. Don't shop there. I'm here for the dividend. I had, however, expected better from those third quarter earnings that were released on November 21st, and I had thought that perhaps the flagship would, at this time of year, pass the eye test. Uhm... Look, a squirrel. Hey, did I mentions that dividend?

The old Los Angeles Rams featured Deacon Jones, probably the best pass rusher in NFL history. Along with Rosey Grier, Merlin Olsen, and Lamar Lundy, all formidable defensive linemen in their own right, they collectively became known as "The Fearsome Foursome." In the huddle, they were known to simply look at each other and say something like "Let's meet at the quarterback."

On Monday morning, Goldman Sachs (GS) analyst Alexandra Walvis (making headlines yet again) made news by downgrading Macy's form a 'Hold' to a 'Sell' and lowered her price target to $12. Now, Walvis is hardly alone on this call. In fact, the rest of the D-line was already there. Not only did Jack Hough write a negative piece on the stock for the print version of this weekend's Barron's, but you may recall going back to those Q3 earnings that the firm not only missed expectations on declining revenue, but lowered full year 2020 forecasts for both sales and profitability. In the wake of that earnings release, several four or five star retail analysts including the likes of Kimberly Greenberger of Morgan Stanley (MS) , Paul Lejuez of Citigroup (C) , and Matthew Boss of JP Morgan (JPM) all reduced target prices while reiterating or maintaining 'Sell' ratings.

In short, there's not a lot of love out there for this former department store champion.

Two questions come to mind. Should I just sell the shares and consider my position an unwise decision? Not necessarily, if the purpose of the decision was revenue based, and it was. Secondly is the 10% dividend yield safe? I think it is. For now. There is no doubt that brick and mortar retail of the department store variety is no longer something that attracts U.S. consumers. In the current environment, as related to the public as a partial cause for lousy performance, non-U.S. currency in the form of tourism no longer pours into New York City's midtown holiday crush either.

So, the firm is clearly still profitable, though those profits are not just under pressure, they are under a serious state of erosion. Cut the dividend, and they might as well embrace the idea of single digit dollar pricing per share. That said, the firm still generates the cash flow necessary to delay making that painful decision for the time being.

What is required is creativity. Too many locations. Too much square footage. Competition from within in the likes of Bloomingdale's and Backstage, but one thing the firm still controls in valuable real estate. That is where flexibility must come from, if this legendary retailer is to evolve in a way to meet the U.S. consumer on the U.S. consumer's terms. Management claimed that e-commerce was a problem because the site was down for part of the quarter. That's unacceptable. The fact is that I don't know anyone who shops online and thinks of Macy's. In the Hough piece, such ideas are batted around as a sale and leaseback of the flagship property (originated at Morgan Stanley), or possibly building up from the massive store on 34th Street in the way of generating revenue through the lease or sale of prime office/residential space.

One thing is certain. For you, for me, for the company you work for, and for Macy's, 100% of all revenue producing models eventually fail unless there is some evolution. Adapt or else. 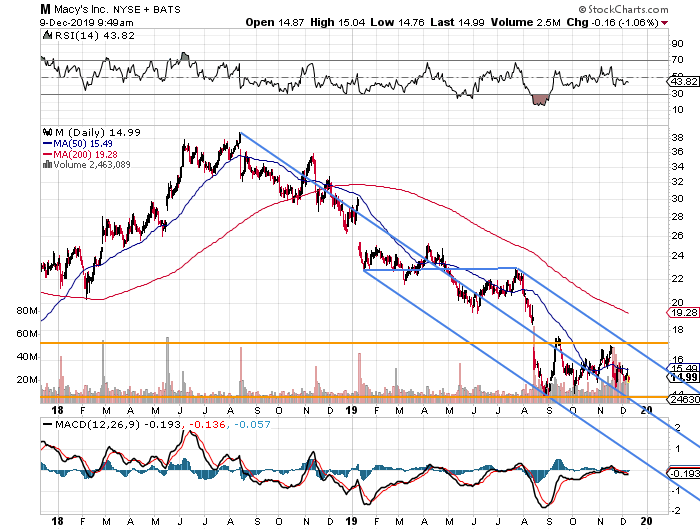 The fact is that the shares remain firmly entrenched within both the 18 month Pitchfork model as well as the Autumn 2019 basing pattern. Macy's pays shareholder $1.51 annually, in quarterly installments of $0.3775 to stick around. This next payment is due on January 2nd to shareholders of record December 13th (this Friday), to trade ex-dividend this Thursday.

In short, I'm not selling the shares ahead of this event. In fact, if the shares should become oversold (which they currently are not) prior, I will add short-term. If one needs to have a target price, might as well use $17.85, the September high, as I recommend having both target prices and panic points for every position. That said, the $14 level has been tried a few times, and to this point has held. My net basis is $15.01, so at this point, this one is barely a loser, but one easily camouflaged by broader market (and portfolio) performance.

I rate Macy's a 'Hold', as that is what I am doing. For now. For those wishing that not just management gets creative, but want to get creative themselves, $13 puts expiring of February 21st are going for about $0.64. (I have written these.) Keep in mind that the firm will host an investor day at the New York Stock Exchange on Wednesday, February 5th. That's when we'll find out how they plan to form a pocket around their quarterback. That's when we, the investors find out how creative management might be. Can they defend themselves?

Get an email alert each time I write an article for Real Money. Click the "+Follow" next to my byline to this article.
TAGS: Dividends | Earnings | Investing | Options | Stocks | Technical Analysis | Trading | Analyst Actions | Stock of the Day