Subscribers to the "Stocks Under $10" portfolio already know that we turned an idea into a nice trade last week. Could we have made a few more bucks than we did? Sure. Did the trade return 27% in less than a week and a half? Remember, this game is all about the hunt, and the kill. That position was entered as a trade, not an investment. The portfolio rang that register. Woulda? Coulda? The trader does not care. The trader hunts. The investor is a different sort of cat. The investor cultivates the land. Nurtures growth. Has to be more understanding, less reliant upon instinct. More on developing a cognizant relationship with the ecosystem. Okay, nicely said, Sarge. Yadda, yadda, yadda. Just tell us. Is Macy's (M) an investment now?

Rowland Hussey Macy founded the original iteration of what would become the Macy's chain of department stores way back in 1858. This is not when our story begins. This story begins well after our national public health crisis was well underway. This story begins this past May 11th. That was the day that news broke that Czech billionaire Daniel Kretinsky had put his Vesa Equity Investment into the name for a 5% stake. Kretinsky had planned to engage with management.

Coincidence? I don't know, but the firm has been aggressive in restructuring not just the Macy's itself, but also its debt-load ever since. Late May, the firm announces a $1.1 billion senior note offering that would make use of 36 stores in shopping malls, 10 distribution centers, and three stand alone locations (Brooklyn, Chicago, San Francisco) as collateral properties that would be rolled up into a subsidiary (worth $2.2 billion in normal times) in order to guarantee the issuance.

At the same time, the firm made plans to create another subsidiary that would own and manage the Macy's inventory. That subsidiary would assume some $3 billion in Macy's debt, and have to sell much of the inventory that had been sitting in empty stores for months on consignment.

On Monday (yesterday), more news breaks. Macy's closes on all of the firm's new financing. This liquidity amounts to roughly $4.5 billion. The flexibility allows the firm to substantially reduce current credit commitments while paying off some other outstanding debt. Macy's suddenly expects to have sufficient liquidity to both fund operations as well as purchase new inventory for coming merchandising seasons.

Tuesday (this morning.) Macy's updates the public on the progress being made. Preliminary first quarter sales are running -45% year over year, slightly missing expectations. Net income looks like it may land at -$652 million. However, EPS is running at -$2.03, above the $-2.18 that the street was largely looking for.

The chain has now been able to reopen 450 locations. The majority of these 450 stores are now open in full format. Reopened stores are said to be performing better than expected. This appears to taking place without cannibalizing the firm's e-commerce business. Digital sales have remained strong in areas where stores have reopened. CEO Jeff Gennette cites positive feedback on the firm's curbside pick-up program. Macy's is not expected to report Q1 earnings for real until early July. 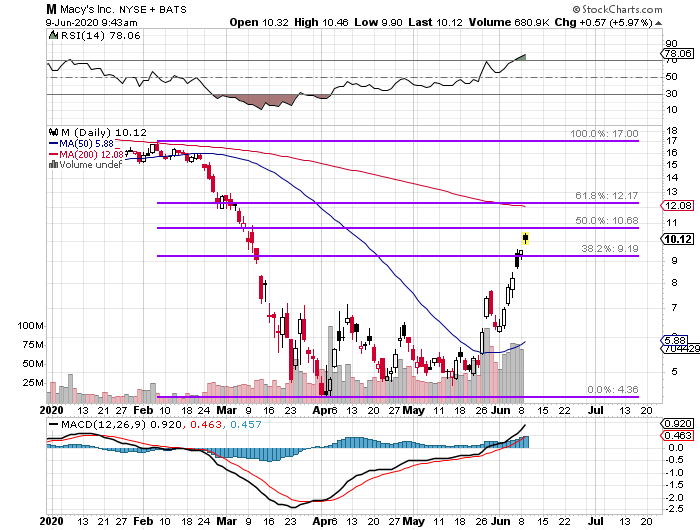 The shares are technically overbought. I am uncomfortable with both where Relative Strength currently is, as well all three components of the daily MACD. Can Macy's still head north from here? Yes, the firm has an aggressive investor who seems to be having a positive impact. That said, this is still a chain of department stores (strike one), whose most important location is smack dab in the center of New York City (strike two)... I can say that, I grew up here. This location, and the success of its unique shopping experience is highly reliant upon the reopening of safe, international tourism (strike three).

My conclusion is that Macy's is speculative here, after such a nice run. If I thought otherwise, the SU $10 portfolio would still be long the shares. What might change my mind? The ability to reestablish the dividend. That would get me fired up. Until then, I don't think I would buy this name at this price for my own portfolio. Right or wrong, I always tell you what I am doing or what I am thinking of doing. I am not thinking of paying ten bucks for Macy's. Offer me the shares below $9 in a couple of days, and we'll talk.

For retail, I'll stick with Amazon (AMZN) and Walmart (WMT) . I also would not mind being back in Home Depot (HD) but that ship seems to have sailed without me this time.

Get an email alert each time I write an article for Real Money. Click the "+Follow" next to my byline to this article.
TAGS: Economy | Investing | Markets | Stocks | Technical Analysis | Trading | Retail | E-Commerce