Lululemon Athletica (LULU) needed to deliver a perfect report Thursday after the bell, and they did exactly that. Heck, they may have done more than that. This is one case where I should have written conviction through earnings rather than letting doubt creep into my mind. Unfortunately, with the market resetting valuation on many names in the retail space, earnings almost dictated a cautious approach. Rather than targeting a downside move around 7%, it is evident I should have targeted an upside move around 7%.

Men are driving new growth. I'm almost as shocked to type it as I was to read it. LULU reported earnings per share of $0.96, seven cents ahead of expectations on revenue of $883 million, which crushed estimates of $843.65 million. The top line for Q3, next quarter, again is pacing well ahead of expectations with management anticipating a midpoint of $885 million versus expectations of $864.4 million. The company's EPS midpoint is a penny ahead of the current $0.90 Wall Street consensus, so the bottom line is not quite keeping pace with the top line. The one negative I see is the full year revenue of $3.8 billion to $3.84 billion basically falls in line with the consensus of $3.81 billion. After crushing Q2 estimates and guiding Q3 higher, that implies the possibility of a softer Q4.

Overall, analysts are positive on the numbers with at least eight price target increases against two reiterations, and one lowering at Wolfe Research. Even the "lowering" was a modest $3 from $228 to $225, so still well above the current $200 price tag of shares. That being said, the average price target sits around $212.25. I wouldn't be shocked to see some additional upgrades or price target bumps if LULU holds the move higher for a few days.

LULU truly is a best-in-class retail name. It appears the growth in the men's category may not be a flash in the pan. I also believe the company likely took a conservative approach on its full-year guidance until it has a few more months of data on the current economic activity plus further updates on the continued growth of men's sales.

But focusing on Q4, that's my biggest hesitation for chasing here. The implication of a soft Q4 is not priced into the stock. At all. We're celebrating a marvelous Q2 and the anticipation of a solid Q3, but Lululemon shares are still priced at a premium. I would anticipate bulls have another month of continued optimism, if not two, but if Q4 doesn't start to swing, then the guidance that comes along with the Q3 report will likely result in the market punishing shares. 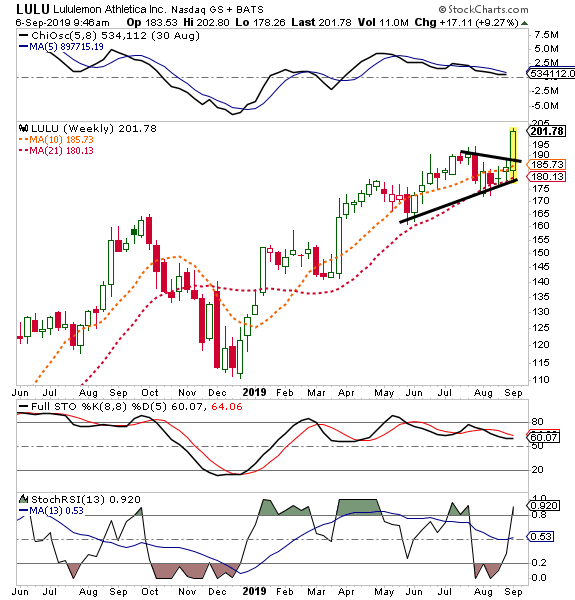 Today's move should set the momentum traders on fire with excitement. The wedge pattern I discussed yesterday has indeed provided a big breakout. With that and strong earnings, but I digress. I think the simple approach is to use a trailing stop on LULU or setup a collar with put protection around $190 to $195 and short calls at the $210 to $220 level. There's no need to panic sell here, but keep that Q4 in the back of your mind. I've only seen one analyst mention it, but extrapolating later quarters has been a focus for me on several articles over the past few weeks, especially on big movers. It's not about today or tomorrow and what to do right now. It's about looking four to six weeks down the line on what could impact your position, and being prepared to act as we get closer to that time.

Get an email alert each time I write an article for Real Money. Click the "+Follow" next to my byline to this article.
TAGS: Earnings | Investing | Stocks | Technical Analysis | Trading | Apparel | Retail | Stock of the Day