Impressive. High-end athletic apparel seller Lululemon Athletica (LULU) has put together another great quarter, adding to a long list of great quarters. Even in this tough environment for retailers. Lululemon released the firm's second quarter financial results on Thursday evening, in case you haven't already noticed. For the three month period ended July 31st, LULU posted adjusted EPS of $2.20 (GAAP EPS: $2.26) on revenue of $1.868B. These top and bottom line results both easily beat Wall Street, while the sales number was good enough for year over year growth of 29%.

I want to point out that while LULU has turned a sizable chunk of cash into inventories, that while elevated inventories have been a problem for most of retail this quarter, that LULU caters to an upscale client base and has not seen a drop in demand. LULU has not had to and may not have to resort to discounting in order to address bloated inventories.

Current liabilities amount to $1.207B, leaving the firm with a current ratio of 1.98. Very healthy, especially if inventories hold their stated value. You guys know that I am hesitant to "do" quick ratios for retailers as the business by nature is inventory reliant, but I have been doing them often this season as this season is different and inventory valuations (though LULU seems different) have been suspect. If we did omit these elevated inventories, LULU's quick ratio would be 0.77. Not awful for a retailer even in normal times.

Total assets add up to $4.921B including $453.8M in "goodwill" and other intangibles. At less than 10% of total assets, this number is probably understated. Total liabilities less equity comes to $2.063B, including no entry for short long-term debt. This balance sheet is golden. If the inventory valuations hold, it's platinum.

Not a huge response. I have only seen four sell-side analysts rated at three stars or better by TipRanks who have opined on LULU since these earnings were released. There are several others who have opined, but I think even including "three star" analysts is a little sketchy. We would only have two if we kept to our usual standard of four stars. Then again, there are a lot less highly rated analysts than there were a few months ago.

Across these four analysts, there is one "buy" rating and three "hold" or hold-equivalent ratings. The average target price for these four is $355.75, with a high of $396 (Matthew Boss of JP Morgan) and a low of $304 (Simeon Siegel of BMO Capital). Siegel is rated at four stars, while Boss is rated at three.

What's not to like? Corporate execution is excellent. Demand is there. Guidance is hot. The balance sheet is strong. Heck, the adjustments made were not in their favor. LULU actually made adjustments that reduced GAAP profitability. How often do you see that? The only thing I see that would slow me down, besides the elevated inventories (that might not be a thing), is the valuation. At 29 times forward looking earnings, the stock is not inexpensive. 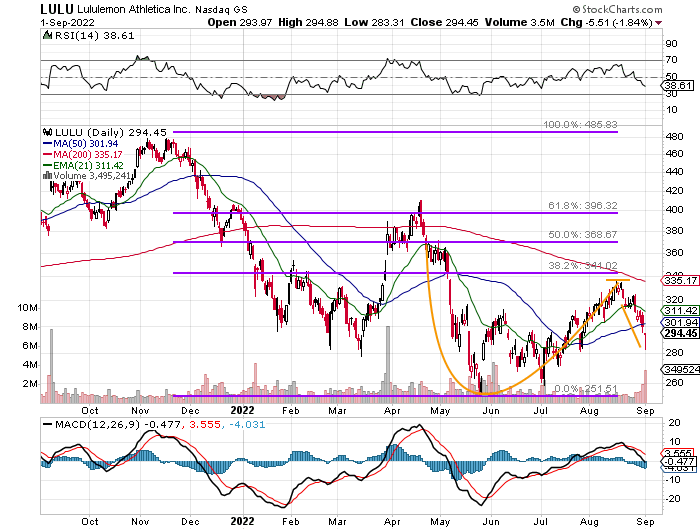 Readers will see that in August, LULU apexed at what was very close to a 38.2% Fibonacci retracement of the stock's November 2021 through May 2022 selloff. The period from April through that August top now presents as a cup pattern. The selloff that culminated on Thursday becomes the handle. This cup with handle creates a pivot at $335.

That pivot point may be a little much to ask for on Friday, but the stock will move into striking distance. Both the daily MACD and the stock RSI will curl higher as trade opened on Friday.

Get an email alert each time I write an article for Real Money. Click the "+Follow" next to my byline to this article.
TAGS: Earnings | Economy | Investing | Stocks | Technical Analysis | Trading | Apparel | Retail