During the "Lightning Round" segment of "Mad Money" on Wednesday a caller asked host Jim Cramer about Lululemon Athletica (LULU) .

"I think it's done going down. People say it's over but that's when I want to buy," responded Cramer.

Let's check out the charts again. We l ooked at LULU on Dec. 16 and wrote that, "Currently it looks like LULU may trade sideways a bit longer, but with the major trend being up. I would look for an upside breakout in the months ahead." Have the charts weakened or strengthened?
In this updated daily bar chart of LULU, below, we can see that prices have declined from the middle of December and are trading below the declining 50-day moving average line and below the still rising 200-day moving average line. The On-Balance-Volume (OBV) line has weakened from the time of our last review in December and this tells us that sellers of LULU have been more aggressive. The Moving Average Convergence Divergence (MACD) oscillator fell below the zero-line in January for an outright-sell signal.

In this weekly bar chart of LULU, below, we can see that some bearish clues have surfaced. Prices are trading below the rising 40-week moving average line. Trading volume has diminished since August while the OBV line has been stalled/flat. The MACD oscillator has been weak since early September when it crossed to the downside.

In this Point and Figure chart of LULU, below, we used daily price data. A downside price target is right at hand. 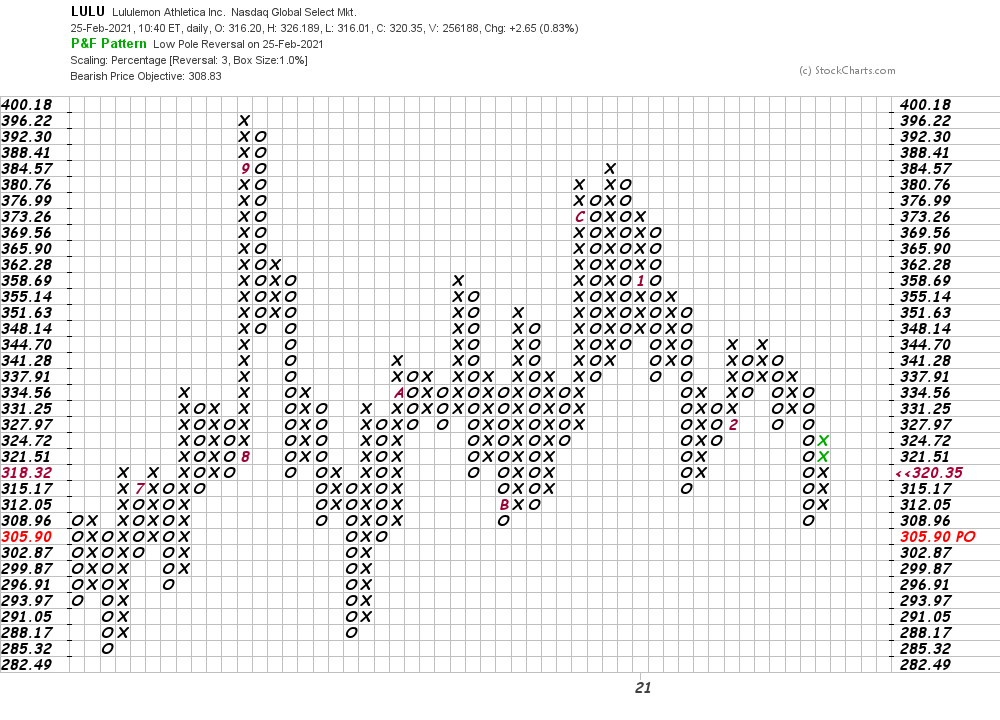 In this second Point and Figure chart of LULU, below, we used weekly close only price data with a traditional even dollar scaling. Here the chart suggests a downside price target in the $281 area.

Bottom line strategy: Sometimes charts can turn on a dime, so to speak, but more often trends in force then to remain in force. For now, the charts of LULU are pointed lower. The September lows will be key.
Get an email alert each time I write an article for Real Money. Click the "+Follow" next to my byline to this article.
TAGS: Investing | Technical Analysis | Apparel | Retail | Mad Money