I wrote to you a couple of week's back concerning one of my favorite new-ish names, luxury electric vehicle manufacturer Lucid Group (LCID) . The stock had an outstanding second half of October followed by a fantastic first few days of November. Then Lucid moved aside as industry leader Tesla (TSLA) and recent IPO Rivian Automotive (RIVN)  , which is backed by both Amazon (AMZN) and competitor Ford Motor (F) , took the focus for a week or so. This was perfect for Lucid shareholders, as the shares were in desperate need of some consolidation after three weeks of near parabolic activity.

Well, tonight, Lucid will retake at least some of that focus.

Tonight, Lucid reports the firm's quarterly earnings since the firm started making deliveries to customers in October, which is what got the public so excited in the first place. There are still only three analysts covering this stock. Five star rated (At TipRanks) John Murphy of Bank of America, who rates the name as a "Buy", and increased his target price from $30 to $60 last Wednesday, and Adam Jonas (also five stars) of Morgan Stanley who has been notoriously correct on Tesla and notoriously incorrect on Ford. Jonas initiated coverage in September with an "Underweight" rating and a $12 price target. In September, long-time Citigroup analyst Itay Michaeli, who is not very highly rated at TipRanks, initiated coverage with a "Buy" rating and a $12 price target.

All three analysts have ventured projections for LCID's earnings per share this evening. You may see a consensus of a loss of $0.25 per share. However, with a high estimate of a loss of $0.13 per share and a low of a loss of $0.41 per share, I don't know how much consensus there actually is. There is only one projection for the top line, that for $1.25M in revenue. These are guesses in my opinion. What we pretty much know ahead of the report is that LCID is losing money on very modest revenue.

Car of the Year

This morning we learned that the Lucid Air has won the 2022 Motor Trend Car of the Year award. This will be the very first instance where the initial product from a new automotive brand name has been awarded this coveted prize. This award, for non-car buffs, is based on these key criteria, value, advancement in design, engineering excellence, safety, and performance of the intended function. The Lucid Air was judged to excel in all.

The clincher was apparently Lucid's EV powertrain technology that has been developed and is manufactured completely in house. Lucid CEO/CTO Peter Rawlinson commented... "Earning this coveted distinction for Lucid Air, our very first car, is a resounding endorsement of our ability to deliver the most advanced electric vehicles in the world. Our objective of achieving range through efficiency and technological innovation is crystalized in Lucid Air, and we're elated that this effort has been recognized by Motor Trend against such formidable competition from well-established automakers."

Deliveries are the key here, more than revenue, more than the net loss. That said, deliveries which are very likely still being measured in lots of 10 did not even start until October. Therefore not a single one of them will count toward these third quarter numbers. That means that Wall Street's reaction will be almost entirely reliant on how confident the firm sounds on the call, and what they say about these early deliveries, as well as anything that might come off as guidance. The actual quarter reported will, in my opinion... count for very little.

Several auto industry websites reported sightings of at least 20-something Lucid Air model cars wrapped and ready to move this past week at the facility in Casa Grande, Arizona. Rivian, as far as we know, has delivered 156 electric vehicles. We do not think that Lucid is that far along, but then again, the two firms are addressing different types of core customers with their early models.

The Advanced Manufacturing Plant in Arizona was completed this past December. Initial production rates for the Lucid Air were expected to run with a capacity of 30,000 cars per year. There will also be a second model, a luxury electric SUV, that the firm expects to introduce in 2023. Ultimately, Lucid is shooting for a full production rate of 400,000 vehicles per year by 2028. 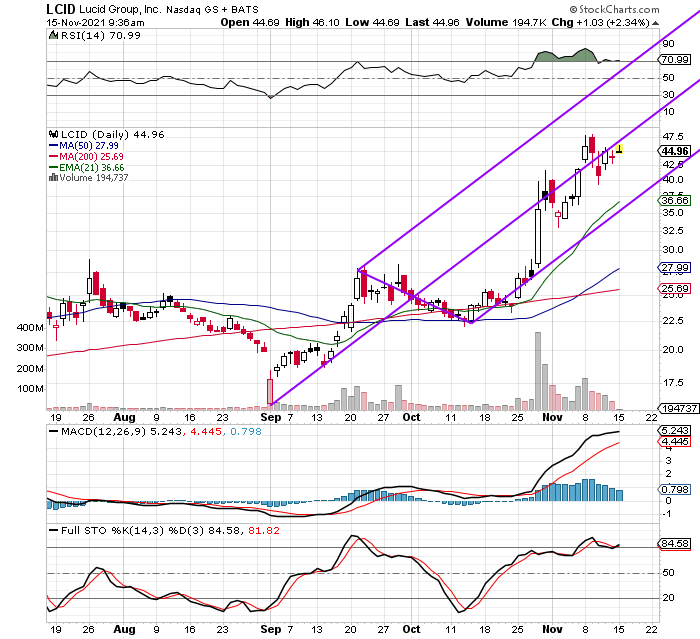 Readers will note that though the shares have moved sideways for a week, all of our indicators still read as technically overbought. The RSI still stands at 70. Both lines of the FSO still stand at 85. Both the 12 day and 26 day EMAs (MACD) are grotesquely extended. That, while the share price has more or less clung to the central trendline of our Pitchfork model.

Common sense might warn caution here, and I think you probably should be. I will not be adding to my existing long position ahead of the numbers. That said, I am not expecting to reduce either. Should the shares sell off tonight in response to earnings inspired profit taking, I will be a buyer overnight into the morning. The exception to that would be of course if there is negative, unforeseen material news.

Oh, one other thing, in my piece two weeks ago, I suggested writing November 19th $30 LCID puts for $1.40. They are worth about $0.08 this morning. If you followed me there, I would be flat by now, you already made that money. Why risk it. Just a heads up.

(Amazon and Ford are holdings in the Action Alerts PLUS member club. Want to be alerted before AAP buys or sells these stocks? Learn more now.)

Get an email alert each time I write an article for Real Money. Click the "+Follow" next to my byline to this article.
TAGS: Earnings | Investing | Stocks | Technical Analysis | Trading | Automotive | Electric Vehicles