I think after writing Tuesday's piece for Real Money covering Walmart  (WMT) earnings, and at least taking a glance at some of the metric in place at Home Depot (HD) , that I almost expected what I see this (Wednesday) morning in the numbers released by Lowe's (LOW) . Basically, if you were a retailer deemed essential and with a robust e-commerce operation already in place, you were well placed going into a pandemic induced economic shutdown.

For the firm's fiscal first quarter, Lowe's reported adjusted EPS of $1.77, beating expectations by a mile, literally. Revenues grew 10.9% to $19.68 billion, also a sizable beat, and the hottest pace of annual growth seen for one quarter at Lowe's in more than two years. The truly impressive performance metrics are some of the same lines that impressed me so much at Walmart. Same-store sales that grew in the U.S. at a 12.3% pace versus consensus of 5.3%. Globally the comp sales hit at growth of 11.2%, versus the 3.3% that Wall Street was looking for. The difference for Lowe's is this. Margin actually increased. The firm spent $340 million for the quarter linked to hiring and safety. Compare that to the $900 million spent by Walmart, or the $850 million spent at Home Depot for the same purposes. Operating margin increased 210 basis points to 10.1%. Wow. The e-commerce business? Up 80%. Incredible.

I will say this. There is a Lowe's near my home. Even at the height of the lockdown, there were a couple of times that I drove past that parking lot and could not believe how full it was. Even the grocery stores were not that full. Then again, many groceries had very little on the shelves at the pandemic's height. Still, impressive.

CEO Marvin Ellison did make note of the fundamental strength of he firm's strategy throughout the quarter. He also made note of the ability of the firm's people to not just rise to the challenges presented by the crisis, but to pivot in order to meet the unexpected surge in on-line business. Like many firms, Lowe's withdrew full year guidance due to all of the uncertainty moving ahead. The firm pays an annual dividend of $2.20 per share. For the quarter reported that came to $420 million. I see no announcement regarding the dividend, which yielded 1.88% as of Tuesday's close. However, Lowe's did repurchase 9.6 million shares during the first quarter for $947 million spent. Lowe's does not expect to repurchase any more shares for the remainder of the current year. 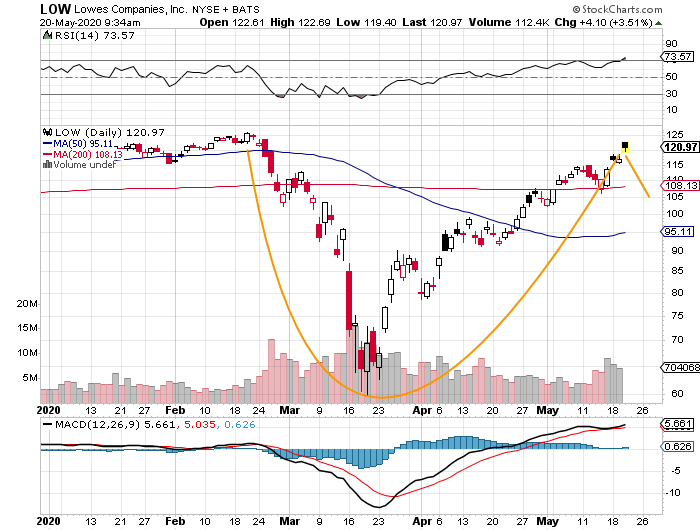 Yes, this is impressive. Will the firm hold onto at least a portion of this sales increase going forward? Probably. You read how loyal I felt to Walmart in yesterday's piece. I felt that in that case that the firm had been there when my family needed them. There are likely those that may feel that way about Lowe's right now.

Readers will see that I attached an imaginary handle to the cup pattern that LOW is still building. I am certainly not going to buy the shares for an entry level trade when it is on a $4 post-earnings run. What I am willing to do, in a risk averse way, is bet that the firm builds a handle on to the already there "cup."

- Purchase one $120 LOW put expiring this Friday for roughly $2.

Note: The trader is risking a net $1.35 to try to win back $5 later this week should there be either a broad market "down day" or a spate of profit taking specific to the underlying shares. Worst case: The trader loses the entire net debit. Best case: The trader brings back a profit of $3.35 should the shares trade below $115 at expiration.

Get an email alert each time I write an article for Real Money. Click the "+Follow" next to my byline to this article.
TAGS: Earnings | Investing | Options | Stocks | Technical Analysis | Trading | Household Products | Retail | Consumer Products