In his second "Executive Decision" segment of Mad Money Wednesday evening, Jim Cramer checked in with Marvin Ellison, president and CEO of Lowe's Cos. (LOW) , the home improvement retailer that saw its shares plunge from $126 a share in February to lows near $60 just last week.

Ellison said Lowe's locations remain open throughout the country. He said business has been strong ahead of their peak spring planting season. And with so many people staying at home, plenty of needed home improvement projects are finally getting done, he added.

Let's check and see if the charts and indicators of LOW need any improvement.

In this daily Japanese candlestick chart of LOW, below, we can see that prices were cut in half in just a few weeks. Trading volume did increase in the past six weeks but not to levels greater than we have seen over the past year. The slopes of the 50-day moving average line and the 200-day moving average line has turned negative and the 50-day line is crossing below the 200-day line. This bearish death cross looks like it is coming too late to be useful. The chart shows lower shadows below $65 which tells us that traders and investors were rejecting those prices.

The On-Balance-Volume (OBV) line shows a relatively short decline from late February and basing or sideways action in March. The OBV line has quickly turned higher telling us that buyers are being aggressive again.

The Moving Average Convergence Divergence (MACD) oscillator is poised to cross to the upside for a cover shorts buy signal.

In this weekly bar chart of LOW, below, we can see that prices gave back more than three years of gains. Last week's bar looks like a low close and this week's bar could be a high close for a potential two-week reversal.

The slope of the 40-week moving average line just turned bearish but we know it is a lagging indicator.

The weekly OBV line declined in the past few weeks but it is in much better shape than the price line. The weekly MACD oscillator is bearish but on the brink of narrowing.

In this daily Point and Figure chart of LOW, below, we can see that the software is projecting a possible upside price target around $132. 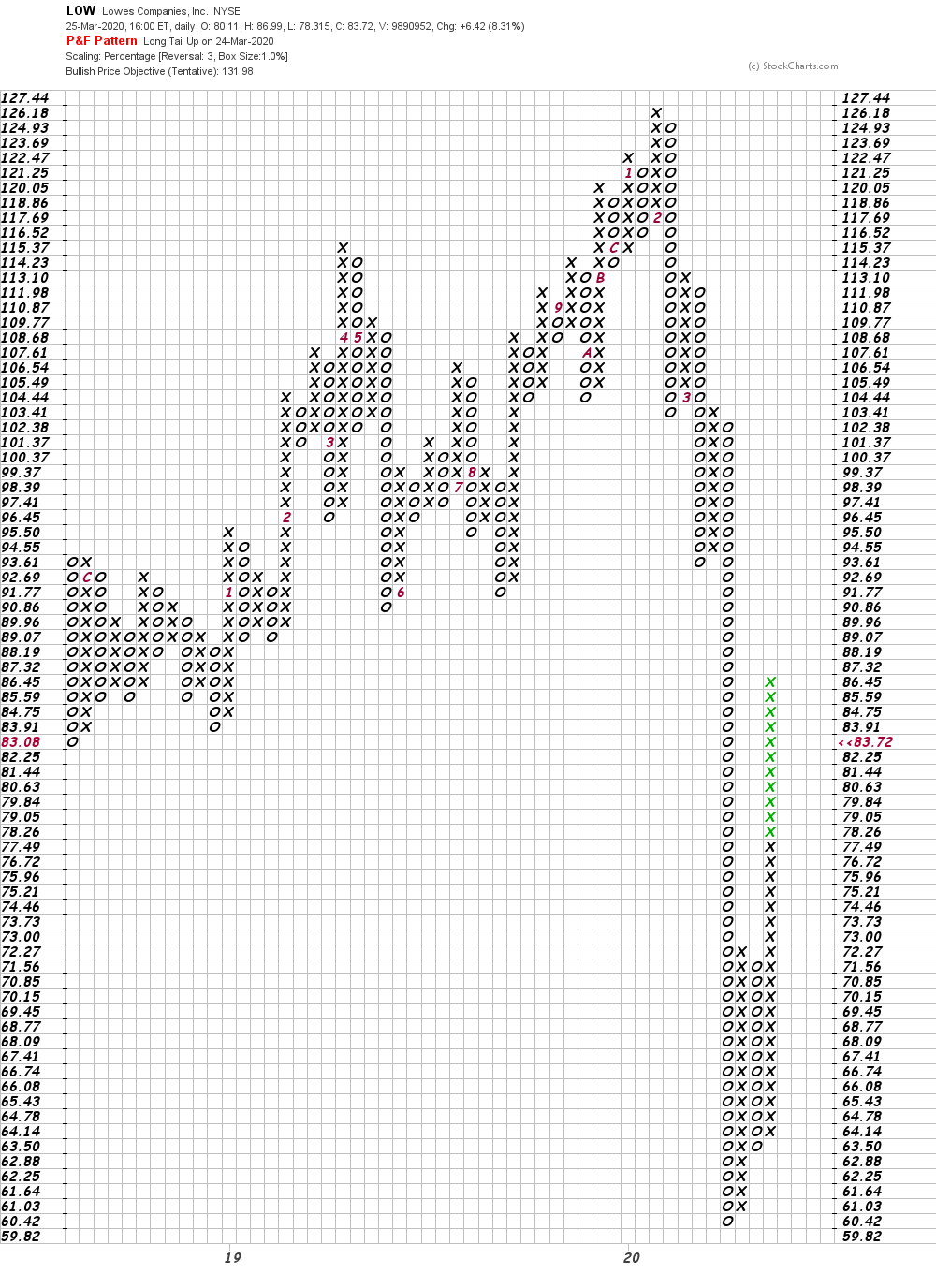 Bottom line strategy: If LOW pulls back closer to $75 in the days ahead I could see going long and risking a close below $69. The $130 area would be our ambitious price target for the second half of 2020.

Get an email alert each time I write an article for Real Money. Click the "+Follow" next to my byline to this article.
TAGS: Investing | Stocks | Technical Analysis | Trading | Household Products | Retail | Mad Money | Executive Interview

The maker of beer, wine and spirits could ignore its bearish clues and follow the broad market higher here on Monday.