There are a couple of items that we must understand as we take a look under the hood at Alphabet (GOOGL) . The first is that it's messy under that hood. Ever pull over after your auto decides that you're not making it home on time that day? You pop the hood, only to realize that the modern combustible engine has long since moved beyond the high school class that you took 40 years ago. That's Alphabet. Many, many high tech moving parts that include many components that you just cannot identify because those who created the engine have made them that way. Opaque is a word that comes to mind.

For the third quarter, Alphabet reported what looks at first to be badly disappointing EPS of $10.12, a second consecutive quarter of contracting earnings growth. The bottom line number might force traders to scratch their collective heads as revenue generation remained comfortably robust. The top line printed at $40.499 billion, above consensus, and year over year growth of 20%, perfectly in line with the previous four quarters. Operating income printed at $9.177 billion, up 6.4% from the same quarter last year. However, operating margin declined to 23% from 26%, resulting in net income of $7.068 billion, a 23.1% decline. Let's go into the firm's businesses

Google Properties contributed $28.65 billion to the whole, up 19% y/y, and a slight beating of consensus. This group includes mobile search and YouTube. For long time followers, this is the segment that once upon a time was referred to as "Website."

This leaves two smaller units, Google Other, and Other Bets. Google Other is still really important toward future growth as this includes the Google Cloud, and Google Play. Though not broken down to specifics as nearly every investor would like to compare growth at the Google Cloud to what we have seen this quarter at Amazon (AMZN) AWS, and Microsoft (MSFT) Azure. The group brought in $6.428 billion up 38%, and above consensus. We will have to make due with commentary that states that Google Cloud was the driver for the growth year over year. Other Bets includes the Waymo unit and is really more of a cost at this point than a revenue provider. Other Bets posted an operating loss of $941 million.

The firm's bottom line suffered from four overtly negative impacts. First, the firm's effective tax rate doubled in the course of one year from 9% to 18%. Secondly, the firm recorded a significant loss of $1.53 billion in equity investment. It's not to much of a stretch to imagine that the firm's stake in Uber (UBER) would be behind that number. The other would be a charge of $554 million related to a legal settlement in France. Lastly, the firm increased headcount a great deal, filling 6,450 full time positions. As of quarter's end, Alphabet employed 114,096 individuals, up from 94,372 12 months earlier. Of course, much of this increase in payroll is related to areas of the firm not yet heavily contributing to top line performance.

It quickly becomes apparent that for the most part, the firm is still executing at a higher level than the impulse reaction to the margin compression would imply. The firm does not provide much in the way of guidance. That's their way. Cash flow from operating activities grew to $15.466 billion, as the cash position, including equivalents and marketable securities ballooned to a massive $121.177 billion. Alphabet does not pay shareholders to stick around, but does repurchase it's own shares. The firm spent $2.2 billion doing just that over the three months reported here.

The pall over the firm, as is true of many large cap tech stocks remains regulatory risk. As a member of the fabled FANG group (Facebook (FB) , Amazon, Netflix (NFLX) , and Google, now Alphabet), these firms have few friends on either side of the aisle in out nation's capital, and concerns over privacy and competition, while worthy of real consideration do play especially well to the public during the electoral season. 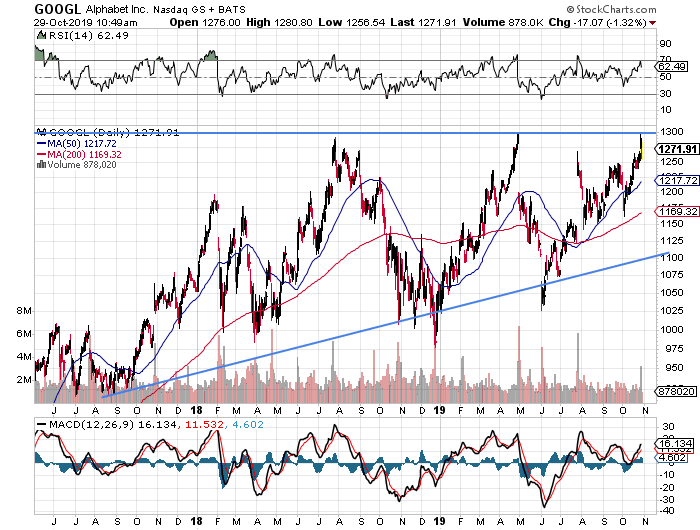 We can break this chart down into smaller slices of time, and find a number of cup with handle formations, and basing patterns. However, zoom this chart out to a two and half year snapshot and I think you see a very large ascending triangle whose pivot was tested just yesterday (Monday). The fact is that should the broader market maintain recent momentum, this stock could take another crack at the elusive $1300 level. I would need to see the level held once taken, but the gateway would then be opened to much higher prices. In addition, the stock (and I have not been a fan) has the feel of a coiled spring even if the year to date performance is exaggerated by the timing of the broader market itself.

Now, this is one name that I would not write puts on even though the premiums are attractive. What a somewhat risk averse, yet bullish trader, who might be willing to put up some cash up front might do is this...

Notes: The trader in this example lays out a net $17 in the hope of winning back $50, for a max profit of $33. Should the shares not reach $1300 by expiration, the trader is out the upfront expense. The trader needs $1317 to break even.

Get an email alert each time I write an article for Real Money. Click the "+Follow" next to my byline to this article.
TAGS: Earnings | Investing | Stocks | Technical Analysis | Trading | Advertising | Stock of the Day