While I don't anticipate this market to change immediately, I don't buy into the belief that "this time is different". History don't repeat, but it often rhymes. No, this isn't the dot-com bubble, but it echoes the sentiments of irrational exuberance. This time we're buoyed by cheap money. Even if that remains, it won't stay cheap forever.

Again, 2021 probably isn't the year it disappears, but I don't think it will be as forgiving as the last nine months of 2020. To make matters worse, the list of names I don't own or don't own the level I wanted to own in my long-term portfolio have run past the point where I want to purchase them currently. That has left me digging deeper into the land of small-caps and microcaps to find opportunity. On that front, due diligence takes significantly longer. It often requires reaching out to management for one-on-one conversations. As you can imagine, that's not something that can be done with large companies, but you'd be surprised how open and accommodating executives of smaller companies can be.

I hope to have a handful of outside-the-box or newer names to cover in the next two weeks beyond the Apples (AAPL) and Teslas (TSLA) of the world. Maybe we can even discuss something that isn't a SPAC or an electric vehicle.

I'm also deploying more funds into the private markets over the next year. The Reg A+ offerings have opened the door for the opportunity to find investments with their best growth still ahead of them. Currently I see SPACs as the most similar opportunity to the private side but only if you are able to catch the SPAC shortly before a deal or on a dip after a deal is announced. Yes, that's much more easily said than executed. I absolutely acknowledge that which is the core reason I've been getting more active and involved in companies still in the private markets with the goal of being public in the next 12 to 24 months.

One piece of breaking news worth noting is the Las Vegas Sands (LVS) announcement it is looking to get into sports gambling. I won't pretend to know who they will partner with but it's likely to be one of the usual suspects. I don't know that I would chase LVS into the pop today. It's a bit extended on the weekly chart, however, I would watch for a close above $60. If we get that on a weekly basis or consecutive days on a daily chart, then I would consider a bullish position around the stock. I expect we'll need another week or two in this $55 to $60 range to get strong breakout, but this is worth a watch. 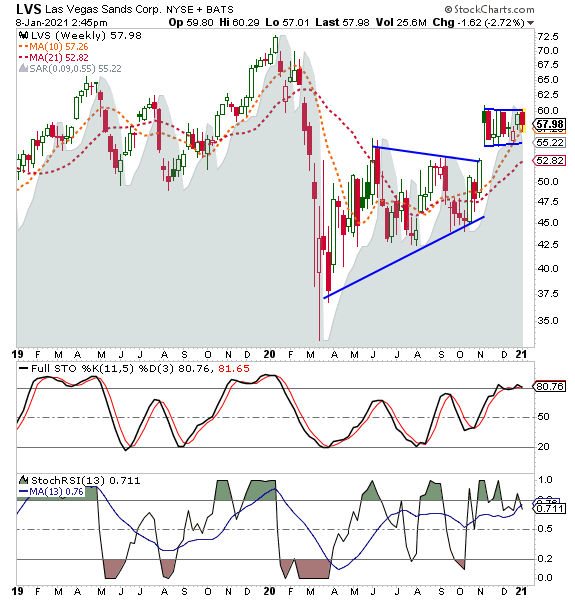 As we wind down an eventful start to the first week of 2021, it's fair to say things appear as though they are going to remain interesting for the first quarter. The need for discipline is going to return sooner rather than later in my view, so keep that in mind as you position yourself for the new year. Stay safe out there and with the first full week of trading behind us I can now say welcome to 2021.

Get an email alert each time I write an article for Real Money. Click the "+Follow" next to my byline to this article.
TAGS: Investing | Markets | Stocks | Trading | Sports business