Last week was rather tough across the board for equities. The Autos were no different. Well, that's not true. In fact they were different. While the Consumer Discretionary sector SPDR ETF (XLY) surrendered 2.17% over the five day period, the Dow Jones US Automobiles Index gave up 5.51%.

Even more interestingly, breaking out the firms individually, we find that both General Motors (GM) and Ford Motor  (F) , the legacy automobile manufacturers that still do a large business in vehicles with internal combustion engines, outperformed at -0.8% and -3.1%, respectively. The largely electric vehicles manufacturers, led by Tesla (TSLA) at -6.2%, which is the only one already at a point where it can mass produce and profitably sell vehicles globally and at scale, and who have all perhaps traded at unrealistic valuations... took a literal pasting. Rivian Automotive (RIVN) , whose quiet period following a traditional IPO came to a very loud ending this morning, finished last week -6.7%, while Lucid Group (LCID) finished the week down 8.6%.

Lucid would reveal prior to the opening on Monday morning that the firm had been subpoenaed by the Securities and Exchange Commission on Friday to produce certain documents related to an investigation possibly pertaining to the deal via SPAC that put the automaker together with blank check company Churchill Capital Corp. IV, regarding certain statements and projections in particular. Lucid states that the firm is fully cooperating with the investigation.

Beyond Tesla, Rivian, and Lucid, Nikola (NKLA) , Fisker (FSR) , Lordstown Motors (RIDE) , and Canoo (GOEV) all took beatings of between 9.7% and 16.6% last week. Oh, and news broke on CNBC while I was writing this piece that the SEC has reportedly opened an investigation into Tesla over whistleblower claims related to solar panel defects.

As far as Wall Street goes, I can find 11 sell-side analysts that have initiated Rivian Automotive on Monday morning. Of the 11, there are eight "buys" or buy equivalents, and three "holds" or hold equivalents. The average target price of the 11 is $133.91, with a high of $170 (John Murphy of Bank of America), and a low of $94 (Mark Delaney of Goldman Sachs). Both Murphy and Delaney are five star rated analysts at TipRanks. Obviously, Delaney is one of the "holds."

Should we omit all analysts not rated at five stars at Tip Ranks, we are left with seven opinions (six buys and one hold), with an average target price of $137.71. Your old buddy Sarge has two favorites among the seven. Alexander Potter of Piper Sandler and Dan Ives at Wedbush. Both are "buys" with target prices of $148 and $130, respectively. Both seem to stress in their notes that Rivian has the best chance to place second to Tesla in terms of market share, while remaining self reliant in the development of both software and battery technology.

This is a name that I traded out of early last week when I was discussing being "skinny" during these volatile markets going into December 15th. I have been very impressed with CEO Peter Rawlinson, and had every intention of re-entering the name once it sold off a little. This news definitely gives me reason to pause my actions in that regard. I really don't know when I will buy those shares back at this point.

You all know that I have extremely high expectations for Ford Motor going forward. This is the name everyone slept on. This is also the name that set $7B aside for investment in new plants in Tennessee and Kentucky. Ford will be a major player in the transformation from legacy driven vehicles to the electric future. That has been my opinion since CEO Jim Farley took the helm and he has done absolutely nothing to disappoint my faith in him. Plus, Ford sells vehicles that regular people like. Pickup trucks and Mustangs. That's going to matter. Even in an electric world. 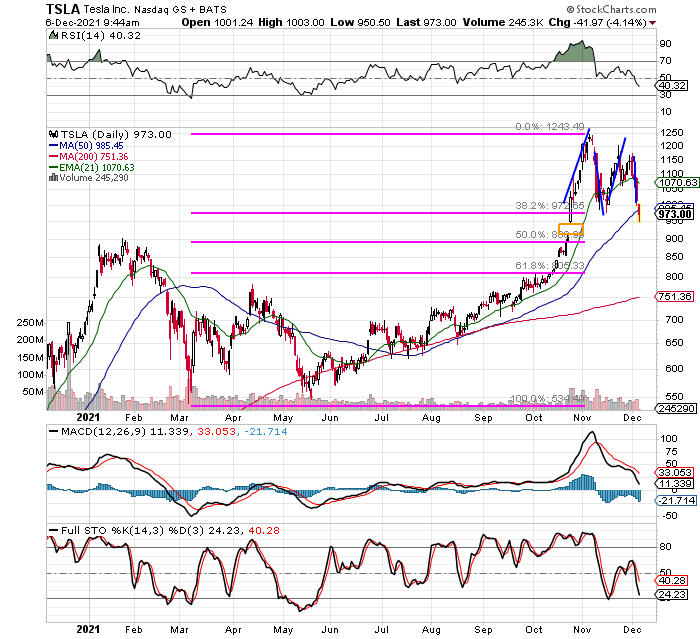 Readers will note two items here. One, Tesla has built a "double top" reversal as CEO Elon Musk has made a game of having to sell 10% of his stake for tax purposes. While all indicators signal some general weakness, none signal anything that severe. Interestingly, then shares have found repeated support at an almost precise 38.2% Fibonacci retracement of the entire March through early November bull run. Very good chance in my opinion that until there is some kind of an all-clear, either on supply constraints or on the Musk selling spree, this stacks maintains what has become a $972/$1250 range. The shares are trading at the lower bound now. Should that Fib level hold, Tesla could be off on another run into 2022. Failure? $805 is not beyond the pale. In all, I don't think the Dan Ives $1400 price target is unrealistic at all. 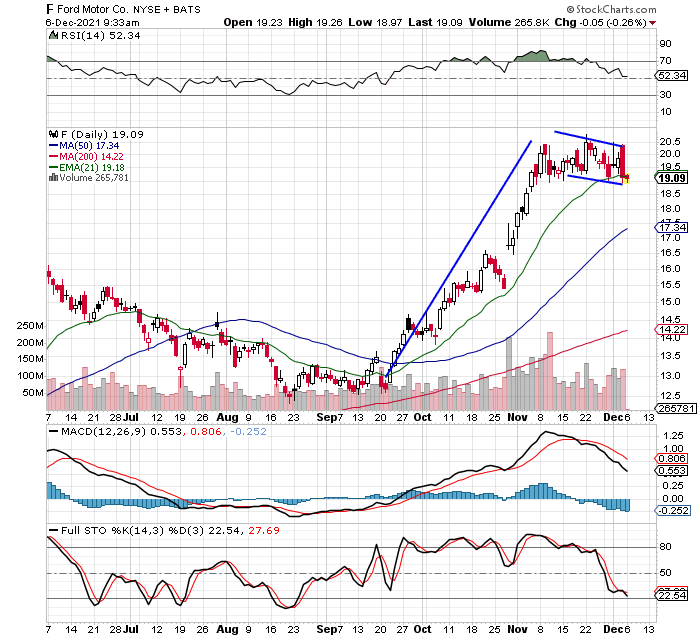 Ford Motor continues to build the "bull flag" that I showed you a couple of weeks ago. This, in my opinion, is cause for the weakness in the Full Stochastics Oscillator. My expectation is that this pattern results in an explosive movement. I am set up for that move to be in a northerly direction. 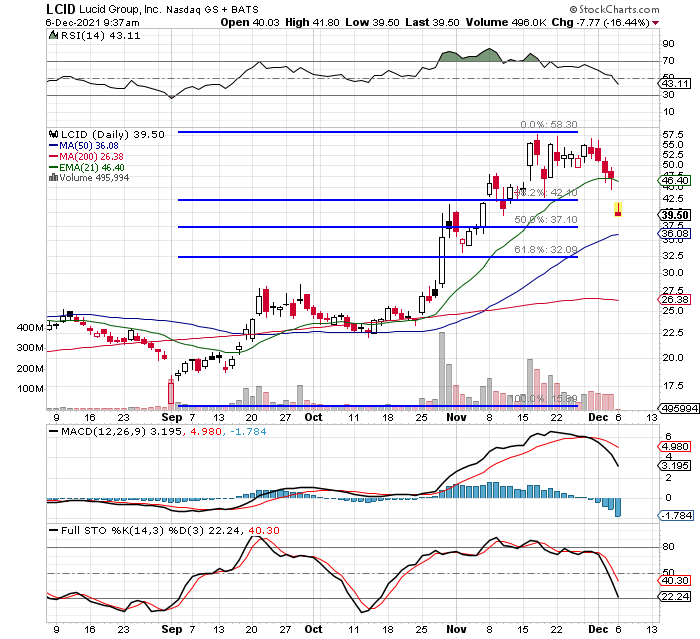 Lucid approaches a 50% retracement of the entire move higher, as well as the 50 day SMA. I don't think I can touch this name until we know more.

Not much of a chart to go off of here. Did you know that if you bought 100 shares of RIVN today, you could probably sell one January 21st RIVN $100 call against the position for about $16. The stock goes higher and you get called away at $100? Okay, you paid a net $84. The stock goes south? You just have to get out before it goes below $84. Worth a thought.

(Ford Motor is a holding in the Action Alerts PLUS member club. Want to be alerted before AAP buys or sells F? Learn more now.)

Get an email alert each time I write an article for Real Money. Click the "+Follow" next to my byline to this article.
TAGS: ETFs | Investing | Markets | Stocks | Technical Analysis | Trading | Automotive | Electric Vehicles