Alber said that Williams-Sonoma isn't just growing because the economy is reopening, it's growing because many of the initiatives they started during the pandemic are ahead of plan. Brands like West Elm still don't have enough brand awareness, Alber said, but once everyone has discovered the brand, sales could double.

Alber discounted the notion that once the economy reopens, sales will begin to decline. She said customers will still need plenty of items and gifts for back to school, back to college, weddings, holidays and more.

Williams-Sonoma is also gaining ground in commercial spaces. Alber noted that not many retailers can give you the whole package, but they can both design and customize commercial spaces and give you everything you need.

We looked at WSM on April 20 and wrote that "It looks like WSM could pull back a little more before finding buying support. With no signs of a major technical top I would consider this a normal correction in a longer-term uptrend. If WSM stops short of $153 it will be a sign of strength in my book."

Let's check out the charts of WSM again.

In this updated daily bar chart of WSM, below, we can see that prices have traded sideways to lower the past two months. WSM is trading just below the cresting 50-day moving average line. The slower-to-react 200-day line has a positive slope and intersects around $125 or so.

The On-Balance-Volume (OBV) line has drifted lower the past two months telling us that sellers of WSM have been more aggressive.

The Moving Average Convergence Divergence (MACD) oscillator moved below the zero line last month for an outright sell signal but could easily cross back above the zero line if prices strengthen.

In this weekly Japanese candlestick chart of WSM, below, we can see a mixed picture. Prices are still above the rising 40-week moving average line, but the weekly OBV line is pointed down and the MACD oscillator has recently crossed to a take profit sell signal.

In this daily Point and Figure chart of WSM, below, we can see a potential downside price target in the $141 area. 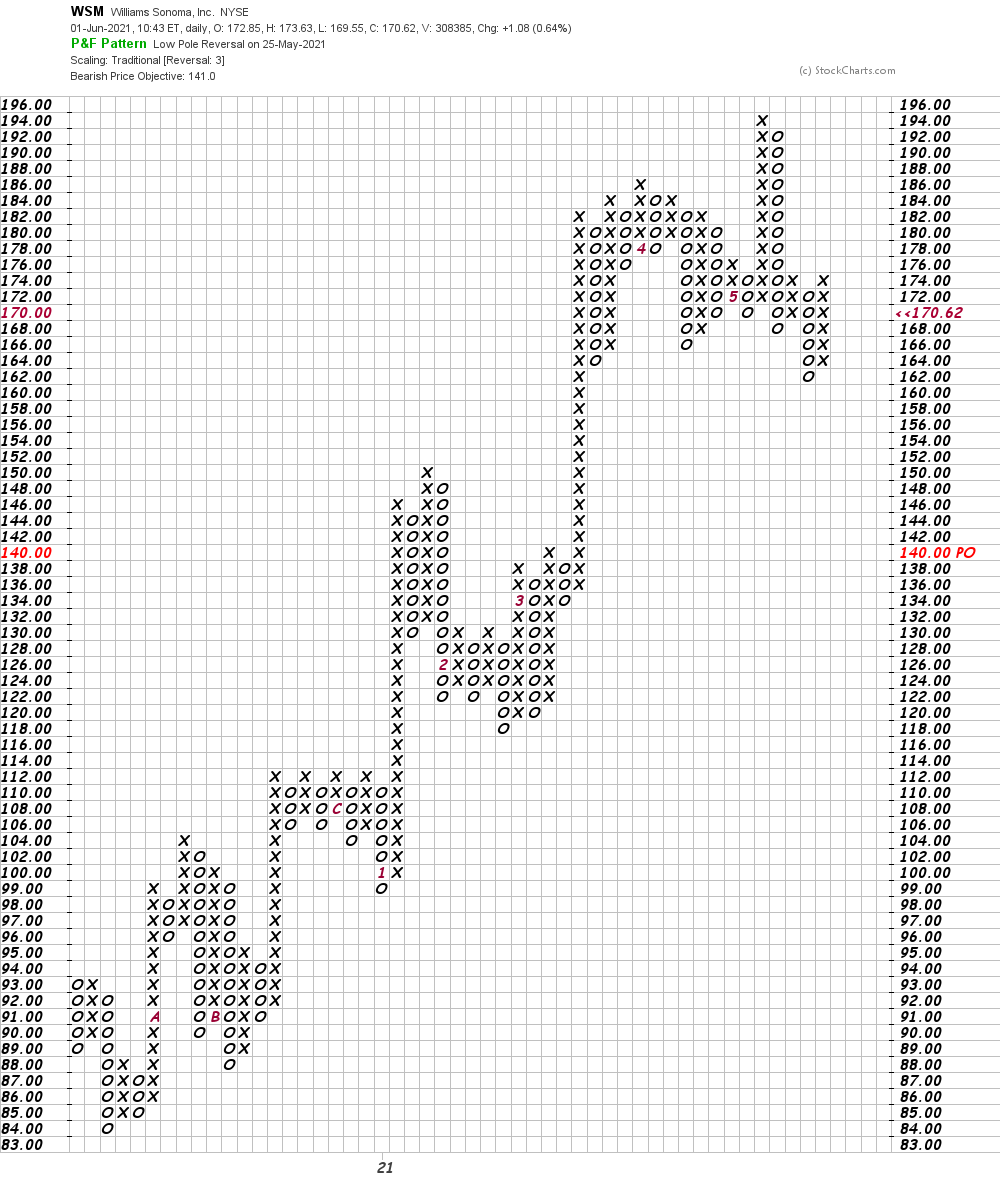 Bottom line strategy: The charts and indicators of WSM suggest we will see further sideways to lower price action.

Get an email alert each time I write an article for Real Money. Click the "+Follow" next to my byline to this article.
TAGS: Earnings | Investing | Stocks | Technical Analysis | Trading | Food & Staples Retail | Household Products | Retail