The company delivered a 26-cents-a-share earnings beat with sales up 66% but the stock price sank on the news.

Darrell said that Logitech saw a lot of strength in the quarter and delivered great results. In a perfect world, investors would have probably liked the company to raise guidance, he said, but after raising estimates just two months ago, they weren't ready to raise again.

When asked about video collaboration, Darrell said the category remains very strong, but not as strong as during the pandemic. Video products are still growing at 72%, he noted, and the company remains very excited about the category.

Darrell was also bullish on e-sports, which continue to gain in popularity, especially with the Olympic games this year. He said that new product innovations, like their Ultimate Ears headphones are one of many hidden gems.

In our May 3 review of LOGI we recommended that "The three charts of LOGI suggest a neutral to bearish path for the stock price for the short to intermediate term."

In this updated daily bar chart of LOGI, below, we can see that prices weakened in early May but made a late runup into early June before turning lower again. Prices gapped lower on Tuesday and are not in a position to retest the rising 200-day moving average line which intersects around $105.

The On-Balance-Volume (OBV) line shows a peak and turn lower from early June which tells us that traders have shifted from being aggressive buyers to aggressive sellers. The Moving Average Convergence Divergence (MACD) recently fell below the zero line for an outright sell signal.

In this weekly Japanese candlestick chart of LOGI, below, we can see that prices are ready for a test of the rising 40-week moving average line.

The weekly OBV line shows some weakness from late May. The MACD oscillator has been weakening since February.

In this daily Point and Figure chart of LOGI, below, we can see a potential downside price target around $105. 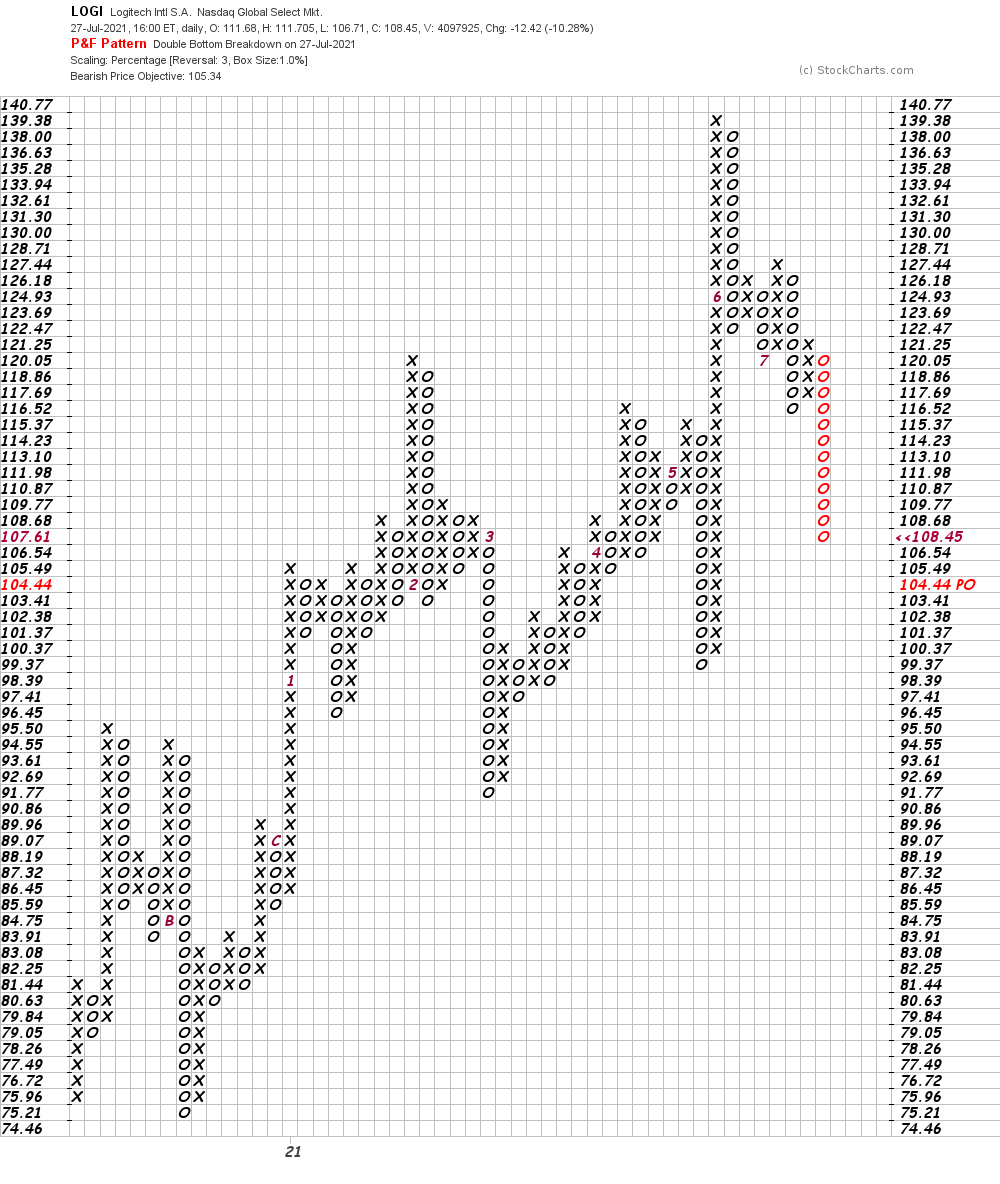 In this weekly Point and Figure chart of LOGI, below, we can see a potential downside price target in the $88 area.

Bottom line strategy: A weak performance on news that would normally be bullish is a bearish "tell" so traders should continue to avoid the long side of LOGI. A decline to the $90 area looks likely now.

Get an email alert each time I write an article for Real Money. Click the "+Follow" next to my byline to this article.
TAGS: Earnings | Investing | Stocks | Technical Analysis | Trading | Fintech | Technology Hardware & Equipment | Gaming | Mad Money | Executive Interview | eSports