In his second "Executive Decision" segment of Mad Money Tuesday evening, Jim Cramer also sat down with Bracken Darrell, president and CEO of Logitech International (LOGI) , the computer peripheral maker that just posted a 7-cents-a-share earnings beat with a 4% rise in revenues.

Darrell said that despite currency and tariff pressures, Logitech was still able to see strong gross margins and continues to grow all three of its businesses. Video conferencing remains strong, he said. Only 4% of all office rooms are video enabled, he said, leaving a huge opportunity for the company. That's not including home offices, which are also slowly becoming video enabled as well. Video conferencing is more affordable and accessible than ever.

Logitech also continues to ride the growth in gaming. While many analysts predicted a slowdown in growth after the popularity of Fortnite last year, Darrell said Logitech saw 16% growth in gaming last quarter.

Cramer said the recent downgrades of Logitech were ill-advised, given the company's continued success.

In this daily bar chart of LOGI, below, we can see that prices made a new high for the long move up but closed the day in the lower half of the trading range. Prices did make a new high but traders did not remain committed longs for the close. The trading volume was not super strong so that is another caution flag for the stock in the short run.

The On-Balance-Volume (OBV) line has been moving sideways since August so we cannot say that buyers of LOGI have been more aggressive leading up to yesterday's rally.

The Moving Average Convergence Divergence (MACD) oscillator is in a take profits sell mode and needs to turn upwards again for a bullish crossover.

In this weekly bar chart of LOGI, below, we can see that prices have not broken out over the high of 2018 around $50. We don't know what the future really holds so we don't know if this could become a large double top formation. The old resistance in the $48-$50 area is not considerable so we could see LOGI push on up through it.

Meanwhile, prices are above the rising 40-week moving average line. Trading volume has been light the past year or so but the weekly OBV line does show a slight rise from August. The MACD oscillator is in a bullish configuration above the zero line.

In this first Point and Figure chart of LOGI, below, we used weekly high/low data to construct the chart. Here we can see a relatively nearby price target of $50-$51. So perhaps a slight new high can be made. 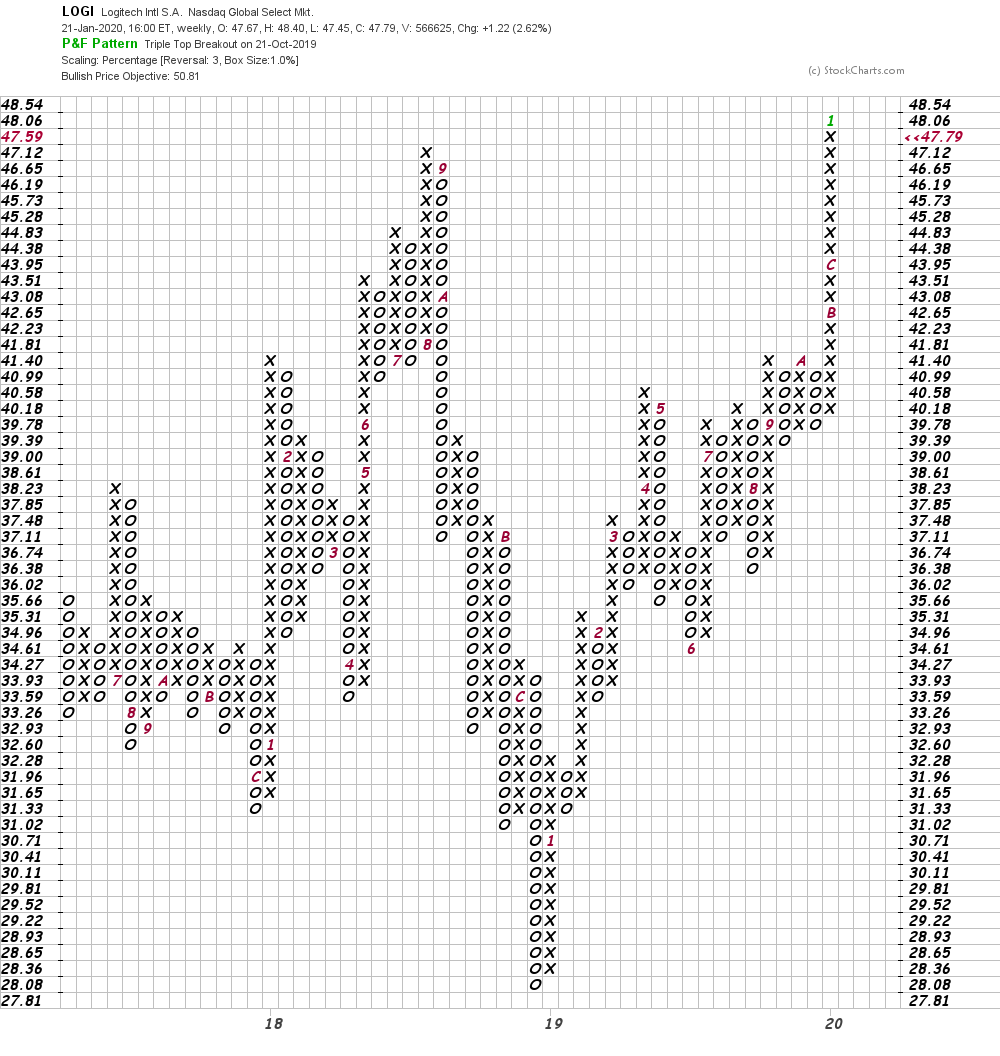 In this second Point and Figure chart of LOGI, below, we used weekly close only data to build the chart. Here we can see a potential price target of $67.

Bottom line strategy: The trend of LOGI is positive but the overall picture with the indicators is just "so so". Can LOGI move higher in this current bull market? Sure. But it does not look like the best use of your capital in my opinion.

Get an email alert each time I write an article for Real Money. Click the "+Follow" next to my byline to this article.
TAGS: Investing | Stocks | Technical Analysis | Trading | Technology Hardware & Equipment | Gaming | Mad Money | Executive Interview | Sports