Now, you know why Lockheed Martin (LMT) and Northrop Grumman (NOC) are both almost always present in varying size among my portfolio holdings. It's not that I love the concept of war. I don't. No sane person does. It's that I have been around the block more than once. Bad things happen, and large purveyors of an enhanced ability to defend oneself, or to project influence nearly always have a market to address. Sometimes that market is large, as national security needs and the needs of allied nations do change over time. That said, never has the need been higher when U.S. and allied national interests are either threatened or perceivably could be threatened by so called "near peer" adversaries.

What is a "near peer" adversary? Exactly what it sounds like. From the end of World War II through the fall of the Soviet Union, NATO and Warsaw Pact forces lined up not in a hot war, but in a "state" of always strategic and sometimes tactical war. The U.S. and Soviet Union were near peers. Current near peers would be China, and quite obviously, Russia, as in either would be capable of provoking a strategic or even tactical state of war with the U.S. This is why I have harped for so long on playing catch-up whereas hypersonic weapons are concerned. Both China and Russia are ahead of the U.S. on this relatively new, and quite indefensible method of warhead delivery. When it comes to hypersonic delivery, the U.S. is quite possibly the "near-peer."

Readers may have noticed that earlier this week, the JP Morgan Chase macro research team released a list of potential outperformers and underperformers across several sectors, in the event that tensions between Russia and Ukraine took a turn for the worse. A turn for the worse has clearly been taken. It comes as no surprise that among Industrials named as outperformers were Lockheed Martin, Northrop Grumman, L3Harris Technologies (LHX) , Huntington Ingalls (HII) , Mercury Systems (MRCY) , Leidos Holdings (LDOS) , and CACI International (CACI) . Note the theme.

Perhaps best known currently for the uber-expensive F-35 fighter aircraft, LMT operates in four business segments: Aeronautics, Missiles and Fire Control, Rotary and Mission, and Space. The recent focus, with mixed success, has been on the development of both offensive and defensive hypersonic weapons. Lockheed is expected to earn a rough $26.60 per share for FY 2022 on revenue of more than $66.15B. The stock trades at 14 times forward looking earnings, and yields 2.9%. 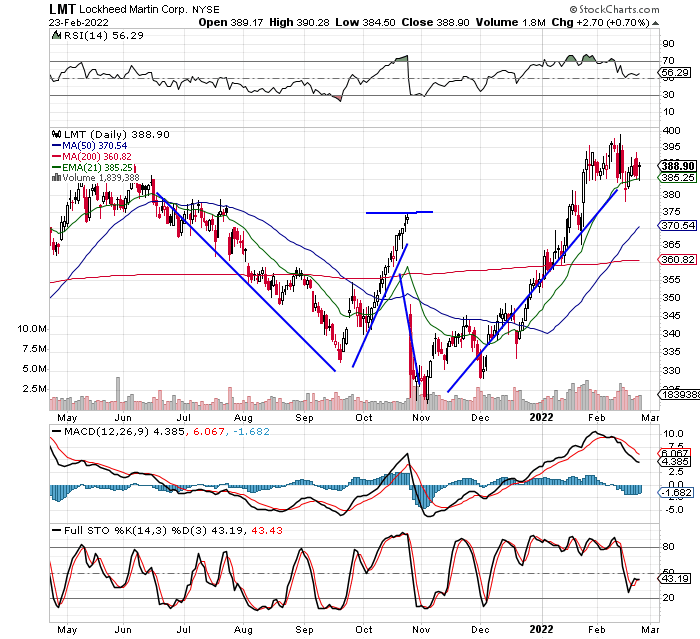 The stock triggered a breakout sprung by a $378 pivot created by a double bottom reversal that hit its nadir in November. The stock is up 2% overnight into Thursday and does not come in technically overbought.

Currently known for developing the B-21 Raider long range, stealth strategic bomber. This firm also operates four business units,, Aeronautics Systems, Mission Systems, Defense Systems, and Space Systems. At this firm too, there has been a focus on hypersonic weapons delivery in coordination with Raytheon Technologies (RTX) to provide an alternative to Lockheed's approach. Northrop is expected $24.85 per share in FY 2022 on revenue of about $36.6B. The stock trades at 15 times forward looking earnings and yields 1.6%. 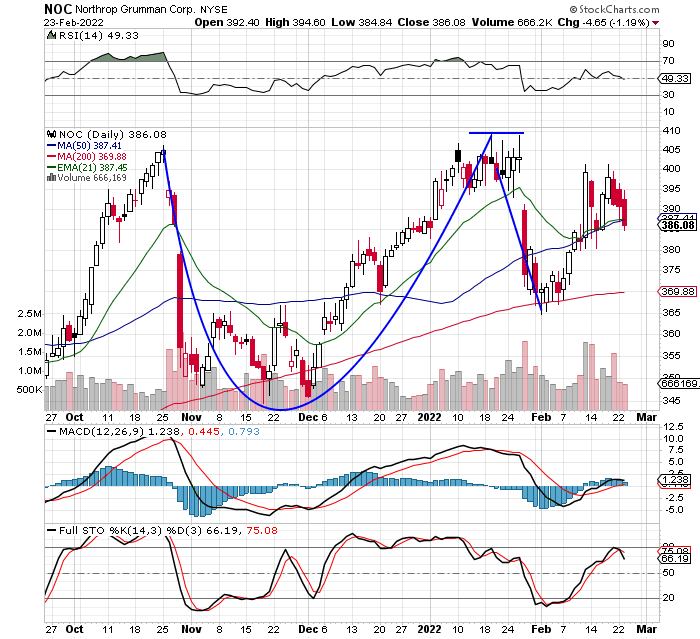 The stock is up 4% in pre-opening trade Thursday morning and poised to potentially make another run at breaking out of that cup with handle pattern after recently finding support at its 50 day SMA.

Get an email alert each time I write an article for Real Money. Click the "+Follow" next to my byline to this article.
TAGS: Investing | Markets | Stocks | Technical Analysis | Trading | Defense | Europe | Russia