Now that the Biden era has begun, where should investors be putting their money? Jim Cramer told his Mad Money viewers Wednesday night that many of last year's themes still apply. He then listed his top 12 biggest investable themes for 2021.

In technology, Cramer noted that digitization, cybersecurity, 5G wireless and remote working will continue to be strong in 2021. Whether it's Zoom Video Communications (ZM) or Palo Alto Networks (PANW) , you'll be hard pressed not to find a winner.

Let's check out the charts of ZM to see if this is the right time and place to rebuy the stock. We looked at ZM back on December 9 and wrote that, "I have no idea where the 'younger crowd' began buying ZM and what tolerance that they have to sit through corrections, but things could get 'interesting' if some of these new investors become traders when the tide is going out. A decline below $375 could precipitate further weakness."

In this daily Japanese candlestick chart of ZM, below, we can see that prices declined below $375 and fell further towards the rising 200-day moving average line. Prices bounced recently to the underside of the declining 50-day moving average line. There has been an increase in trading volume this month as prices improved but it does not strike me as having a lot of intensity.

The On-Balance-Volume (OBV) line shows an interesting movement since late September - the OBV line has moved sideways even as prices declined. This suggests that traders and investors did not turn into aggressive sellers. This could be a problem if ZM breaks it January low.

The 12-day price momentum study shows that the pace of the decline slowed from November to January and that is a bullish divergence. Perhaps some deep pocket investors were scale down buyers of ZM.

In this weekly Japanese candlestick chart of ZM, below, we see a mixed picture. Prices declined and pretty much tested the rising 40-week moving average line last week. This test of the 40-week line may have been a buying opportunity but I think I need more evidence.

The OBV line shows a slight move lower since September suggesting there has been some pick up in aggressive selling.

The Moving Average Convergence Divergence (MACD) oscillator shows some narrowing in recent weeks but it is still pointed down and probably weeks away from a potential bullish crossover to the upside.

In this daily Point and Figure chart of ZM, below, we can see that prices are still in a downtrend but the software is projecting the $552 area as a possible price target. 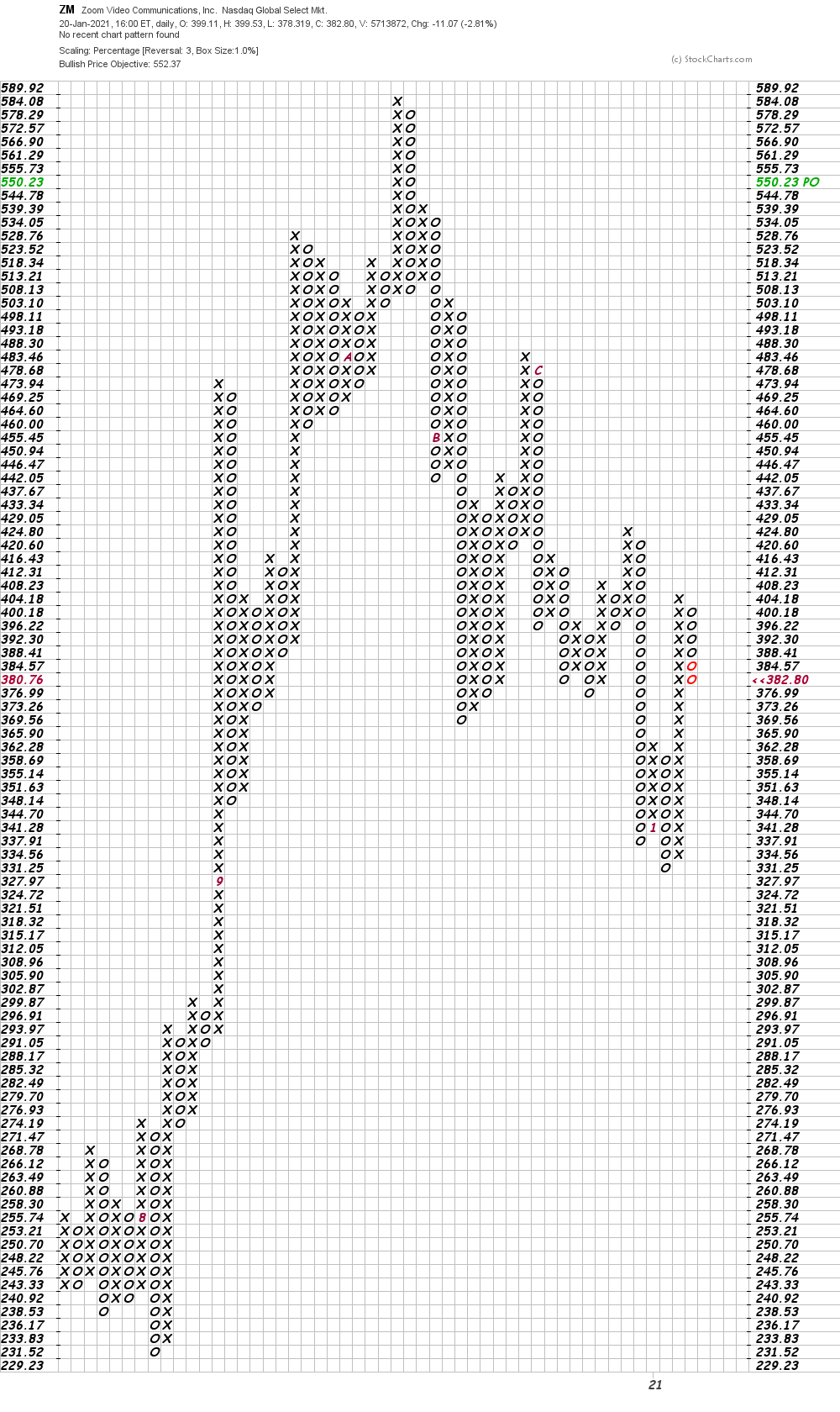 Bottom line strategy: When we look at the daily and weekly candlestick charts (above) we see the $250 area as important chart support - former resistance from June-August. This area would also be roughly a 50% retracement of the 2020 rally. My gut says to continue to defer purchases of ZM. Let's see if a better buying opportunity presents itself.

Get an email alert each time I write an article for Real Money. Click the "+Follow" next to my byline to this article.
TAGS: Investing | Markets | Stocks | Technical Analysis | Trading | Software & Services | Telecommunications | Mad Money | Telecom Services