Oh, Microsoft (MSFT) , how I love thee, let me count the ways. Actually, I like Microsoft for a number of good reasons, and I am long the name for those reasons. Good enough? I hope so. First rule for equities traders... We fall in love with our favorite sports teams. We fall in love with our spouse, probably over and over again for decades. We never, ever fall in love with any stock. Why is that, Sarge? Glad you asked, my young padawan. Thought it may seem for a while that a favored position has returned one's affection, those positions can never love you back. You do get that, right? You will still root for that stock, long after it starts to hurt you. Corporations need shareholders, we need vehicles to use as ways to grow our net worth. The relationship is both warmly symbiotic, yet also very coldly mercenary in nature. Remember that. The day will come when the ability to turn off all emotion will serve the individual investor quite well.

Remember what CEO Satya Nadella said after the earnings beat last October? He said, "The world's leading companies are choosing our cloud to build their capabilities. We are accelerating our innovation across the entire tech stack to deliver new value for customers." Yes, the cloud space, and how rapidly Azure has been gaining on Amazon's (AMZN) AWS in terms of capturing market share has been a driver for me as a shareholder to stay long this name for as long as I have. It really does just keep getting better. Just days after that earnings release, Microsoft landed the potentially lucrative $10 billion, 10 year cloud computing award for the military known as JEDI from the Pentagon. Despite competition from the likes of Amazon, and from Alphabet's (GOOGL) Google Cloud, this is where the margin has been, and as of Q3, still was growing.

You can like the legacy offerings, such as Office, Windows, the Xbox, or even LinkedIn, and they all contribute to sustained operating cash flows. Nothing beats growth, especially when that growth is in a company's most profitable business lines. As for those other businesses, the quicker and more easily that these line items move (and they are) toward the subscription model (recurring revenue), the better.

Now, about the $1 billion investment in the Climate Innovation Fund. The intent is to lend, or even take equity stakes in relevant ventures. What about Microsoft being carbon neutral since 2012, going carbon footprint net-negative by 2030, and stating the intention to remove all carbon emitted by the firm since 1975. Crazy to waste money in ways that might not be rewarded financially in the short to medium term you say? Crazy like a fox, I say. Regardless of your view on climate change, it does not take a genius to recognize after the BlackRock (BLK) CEO Larry Fink's letter this week to see what kinds of firms in the long run will appear more attractive to the flow of capital. Sarge, I thought you weren't publicly political? Try not to be. I'm here for one reason. To make money. Same as you. What does one do in response to a changed environment? One identifies avenues of attack, and targets of opportunity. One adapts to these changing conditions. One overcomes, and then moves on. I know that you know this. 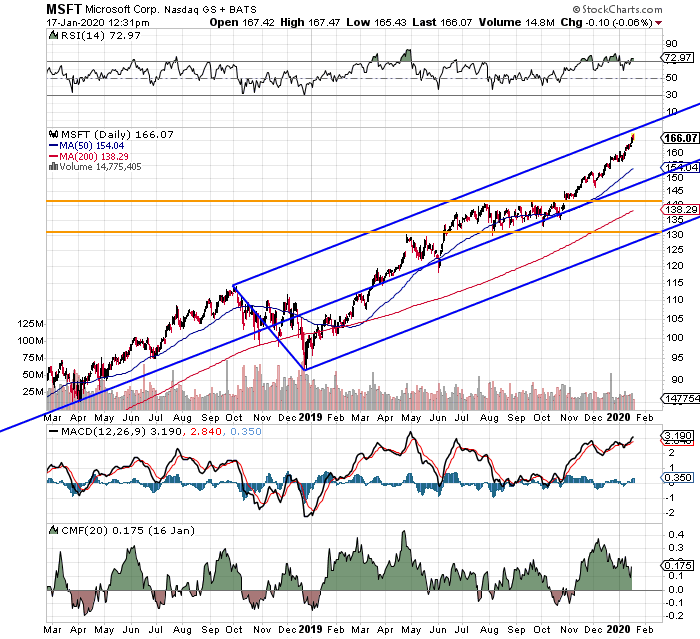 Microsoft is not one of my names that has just kept on hitting target prices, thus forcing decisions. The stock is getting close though. Viewers will note that these shares have respected the upper chamber of our Pitchfork quite nicely. As the shares have pulled away from their own 50 day SMA is getting me closer to a sale than I have been in a long time.

The shares are now technically overbought. Welcome to the club. Half the market is technically overbought, which is a whole lot better than whining about the algos during a correction. My target price is $170 for this stock. My add is down in the $140's and my panic point is way below, down at $120. According to TipRanks, 27 analysts have weighed in on Microsoft over the past three months with a target price. Their average is $168.91, so at least I know that I am, I mean that they are close. The market, and Microsoft may just keep on keepin' on. I will sell my first tranche at $170, and then take the stock's temperature at that time.

(Microsoft, Amazon and Alphabet are holdings in Jim Cramer's Action Alerts PLUS member club. Want to be alerted before Jim Cramer buys or sells these stocks? Learn more now.)

Get an email alert each time I write an article for Real Money. Click the "+Follow" next to my byline to this article.
TAGS: Earnings | Investing | Stocks | Technical Analysis | Trading | Software & Services | Technology | Technology Hardware & Equipment | Stock of the Day