During the Lightning Round segment of "Mad Money" on Tuesday evening, Jim Cramer was bullish on home builder Lennar Corp. (LEN) . Let's check out the charts of this home builder to see if things are move-in ready.

In this daily bar chart of LEN, below, we can see a positive trend the past year. Prices are testing the rising 50-day moving average line, but stand well above the rising 200-day moving average line. Prices have corrected a little from late November, but the daily On-Balance-Volume (OBV) line has been relatively steady the past two months, suggesting that existing longs have largely held their positions.
The Moving Average Convergence Divergence (MACD) has flattened out just above the zero-line so it should not take much of a rally to turn this indicator to a new buy signal.

In this weekly bar chart of LEN, below, we can see that prices have moved higher in two separate "legs" from late 2018. Prices are above the rising 40-week moving average line and the weekly OBV line has been in an uptrend since last December. The weekly MACD oscillator is bullish, but the two moving averages that make up this indicator have narrowed and the next move up or down in price could produce a new signal.

In this Point and Figure chart of LEN, below, we can see that the software has projected a downside price target of $54, but a trade at $61.03 or higher should improve this chart. 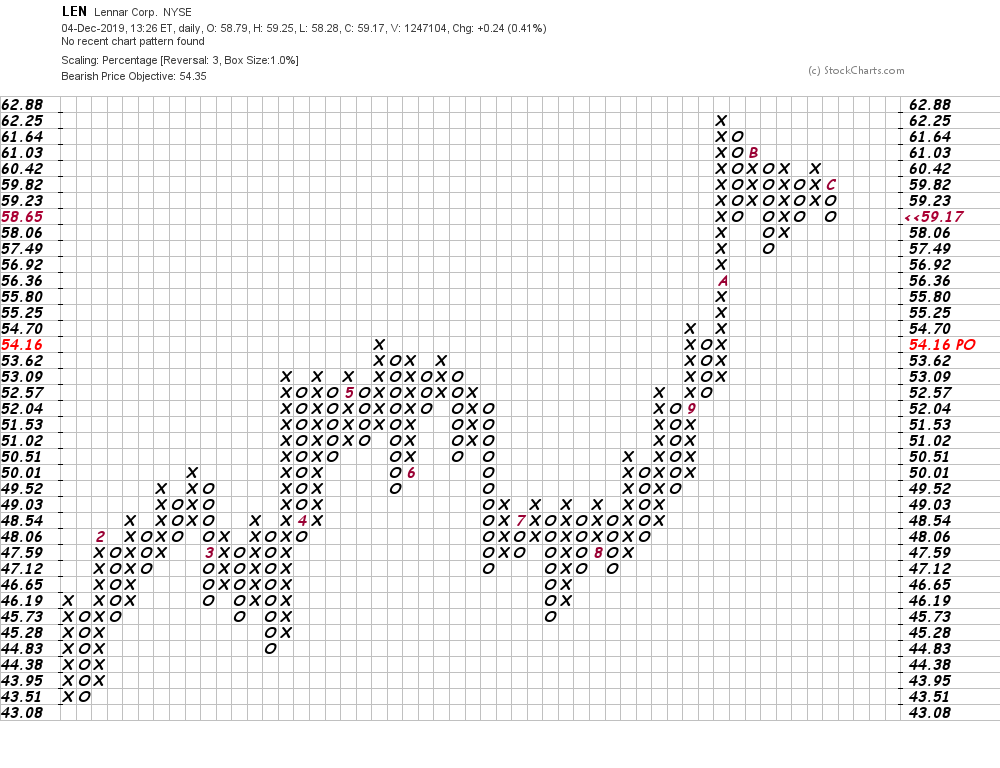 Bottom line strategy: I would look for LEN to trade sideways to slightly higher in the near-term, but eventually resume its rally.
Get an email alert each time I write an article for Real Money. Click the "+Follow" next to my byline to this article.
TAGS: Investing | Technical Analysis | Construction & Engineering | Mad Money