Now, that's a horse of different color. News had broken with the dawn. General Electric (GE) would sell the firm's BioPharma business to Danaher (DHR) for $21.48 billion. The deal is expected to close sometime in the fourth quarter, and will include both $21 billion in cash as well as an assumption of some pension liabilities. The unit, part of GE Life Sciences, generated $3 billion in revenue last year. Pharmaceutical Diagnostics does not appear to be part of this agreement. For GE's part, the proceeds will be put to good use... to pay off some debt, and do some balance sheet repair. By the way... yes, GE CEO Larry Culp is the same Larry Culp who once captained Danaher. That is where Culp honed his reputation as a creator of value.

Along the lines of said value creation, GE will now have to re-examine plans to bring the firm's healthcare segment public in the form of an IPO, after the sale of this portion of that business. In other news, GE also completed the complicated deal with Wabtec (WAB) . In this particular deal, GE sells a portion of GE Transportation to Wabtec, spins off another portion to shareholders, and then merges GE Transportation with a subsidiary of Wabtec, Bottom line... what GE ends with here is a 24.9% interest in Wabtec, and a $2.9 billion cash payment. Clearly, Larry Culp showed up at the right time for this firm. The question for us though becomes is this, or when is, the right time for investors to create some value for themselves? 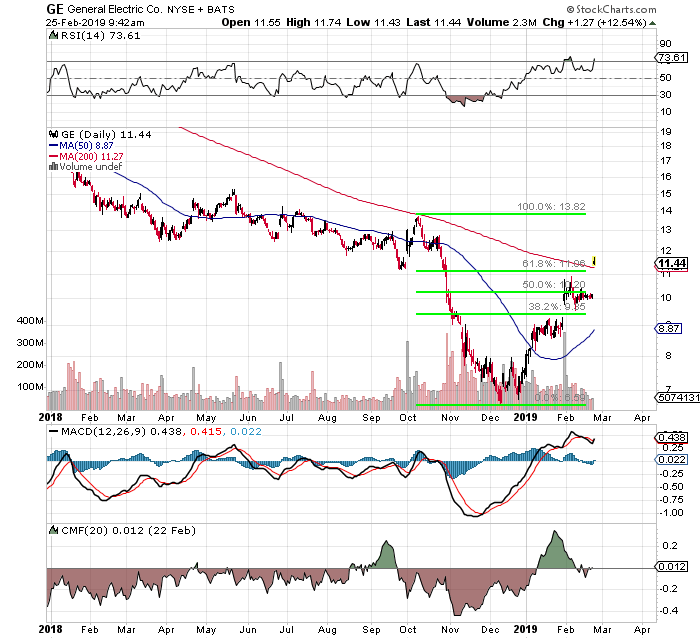 I hate to say this, because I want to believe, but I think this name will remain heavy technically. Now, my voice is not the only game in town. I get that. But Relative Strength looks toppy. The daily MACD looks extended. Money Flow is okay here, but that's really a trailing indicator at that. What's my interest? I have already been long the name for the "Stocks Under $10" portfolio. We had already exited at a nice profit, and to be frank... I was waiting for a selloff to get re-involved in the single digits, but not here. I don't very often chase a name.

In my personal account, I remain short a cascading series of puts that expire in June that carry discounted strike prices. So, yes, this news presents as a payday as those puts are trading very close to worthless with four months to go. I don't think I'll stay short the series as my profit is nearly at 100% of potential... in other words, I need to protect these gains against a potential drop in the market price of the equity, and will likely get this position off of my book today.

Standard & Poor's has already come out and said that their credit rating and their outlook for GE will remain unchanged. I am interested in buying the name below $10. At this level, I have no interest. If you do go there, I bid you good luck, but I don't think this is your last chance to get long this name at this level. A hold of the 200 day SMA as this week progresses would go a long way toward convincing me otherwise.

(Danaher is a holding in Jim Cramer's Action Alerts PLUS member club. Want to be alerted before Jim Cramer buys or sells DHR? Learn more now.)

Get an email alert each time I write an article for Real Money. Click the "+Follow" next to my byline to this article.
TAGS: Mergers and Acquisitions | Investing | Options | Stocks | Technical Analysis | Trading | Industrials | Stock of the Day