During Wednesday's "Mad Money" program, Jim Cramer called out Lam Research Corp. (LRCX) as one stock that declined Wednesday. Cramer felt it was worth buying as the bad news is already priced into the stock. Maybe, but let's take a look at the charts and indicators of Lam Research -- whose technology lets chipmakers build smaller and faster electronic devices -- to see if the coast is clear.

In this daily bar chart of LRCX, below, we can see that prices displayed a strong pattern from the end of December to the end of April. From early May the pattern is much different. During the rally phase LRCX stayed above the rising 50-day moving average line. Since early May prices broke below the cresting 50-day line and in June we saw a rally failure at the underside of the 50-day line. The 200-day average line turned up at the beginning of April and now it is flattening. The On-Balance-Volume (OBV) line shows a rise from December to May and now a decline signaling more aggressive selling. The Moving Average Convergence Divergence (MACD) oscillator crossed to the upside at the beginning of June for a cover shorts signal but the oscillator could be turning lower again.

In this weekly bar chart of LRCX, below, we can see that prices made a lower high this year than the late 2017 and early 2018 highs. Prices are above the slightly rising 40-week moving average line, but not that far above it. The weekly OBV line shows a longer-term decline from November 2017. The weekly MACD oscillator is in a take profits sell mode from May.

In this Point and Figure chart of LRCX, below, we can see an upside price target of $241 projected, but a trade at $209.59 is needed for an upside breakout. A decline below $170 is likely to precipitate further losses. 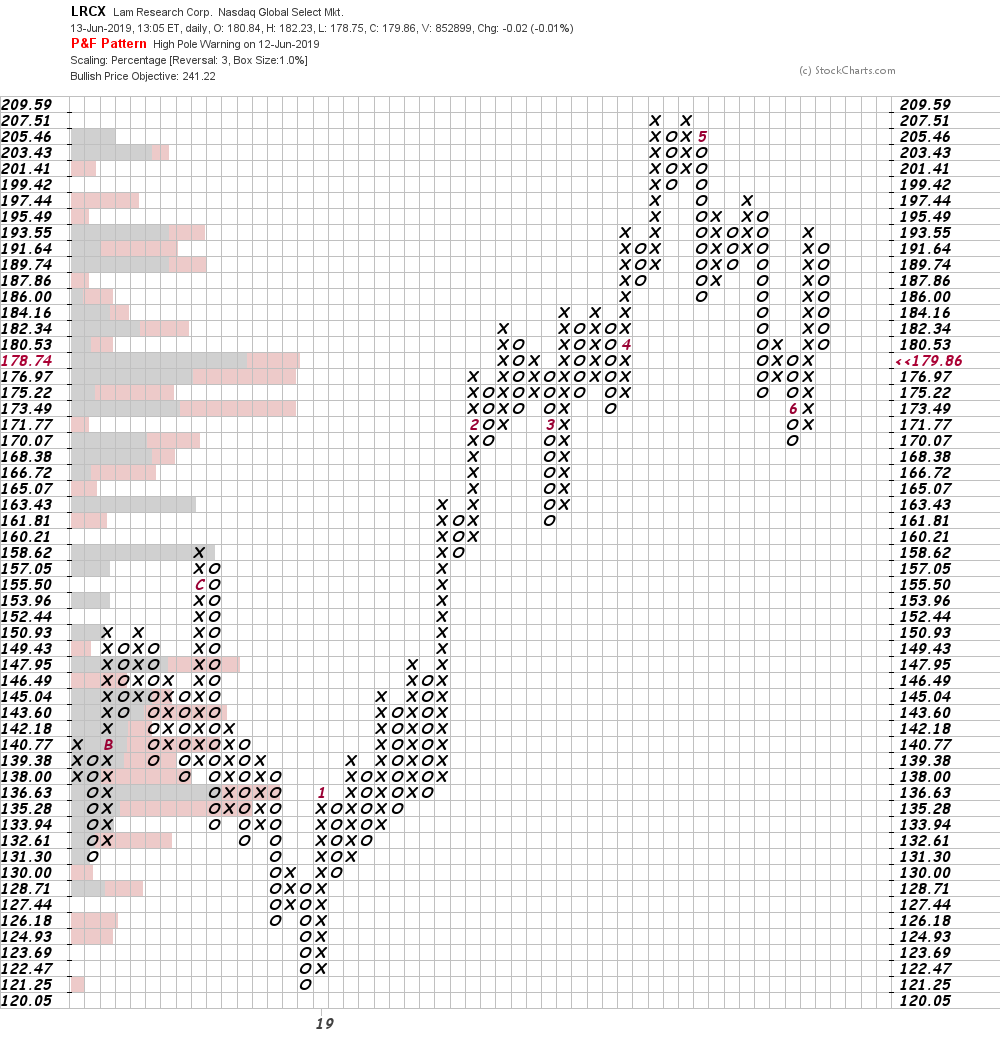 Bottom line strategy: LRCX is closer to a test of support at $170 than a test of resistance at $195. Further weakness in the broad market could spillover to LRCX. I do not consider myself a "perma-bear" but it is not hard to find top patterns like the one we see on LRCX.

Get an email alert each time I write an article for Real Money. Click the "+Follow" next to my byline to this article.
TAGS: Investing | Technical Analysis | Semiconductors & Semiconductor Equipment | Mad Money

Jim Cramer: Let the Barbell Do Your Heavy Lifting

Investing isn't brain surgery: Keep a portfolio that's diversified with these qualities, and it will pay off on days like this.

We have an interesting crossroads here.

C has a vibrant and liquid options market, so even playing strategies like spreads and combinations is relatively easy to do.

The Fed is hoping its plan works, but one big risk is stagflation.

Keep Pursuing Opportunities While You Can

React as conditions change rather than to try to anticipate them.