During the "Lightning Round" of Jim Cramer's "Mad Money" program on Monday night, a caller asked Cramer about L3Harris Technologies (LHX) .

Let's check out the charts.
In this daily candlestick chart of LHX, below, we can see that prices made a steep four to five week drop into March. Prices have rebounded part way back up, but they have so far stalled at the underside of the November and December lows. These prior lows were support and now they have reversed rolls as we see them act as resistance as previous buyers are just looking to "get even." The slopes of both the 50-day moving average line and the 200-day moving average line are negative and the 50-day line is poised to cross below the 200-day line for what is commonly called a death cross. This bearish signal is typically late, but can be effective if the downtrend is long sustained.
The On-Balance-Volume (OBV) line shows a peak in February and is still in a downtrend, even though prices have improved a bit recently. The trend-following Moving Average Convergence Divergence (MACD) oscillator has crossed to the upside for a cover shorts buy-signal but an outright go long signal will have to wait a while.

In this weekly Japanese candlestick chart of LHX, below, we can see that the decline in recent weeks retraced a big chunk of the advance from late 2018. This deep of a retracement is probably going to need a longer period of rebasing before a new advance can get in gear. The slope of the 40-week moving average line turned negative this month and the weekly OBV line shows a decline from February. The MACD oscillator is below the zero-line but starting to narrow which is a modest positive.

In these daily Point and Figure chart of LHX, below, we see two items to out point -- first, we need to see a trade up at $191.64 to refresh the uptrend and second, the upside price target of $285 looks like a long way off with plenty of resistance overhead. 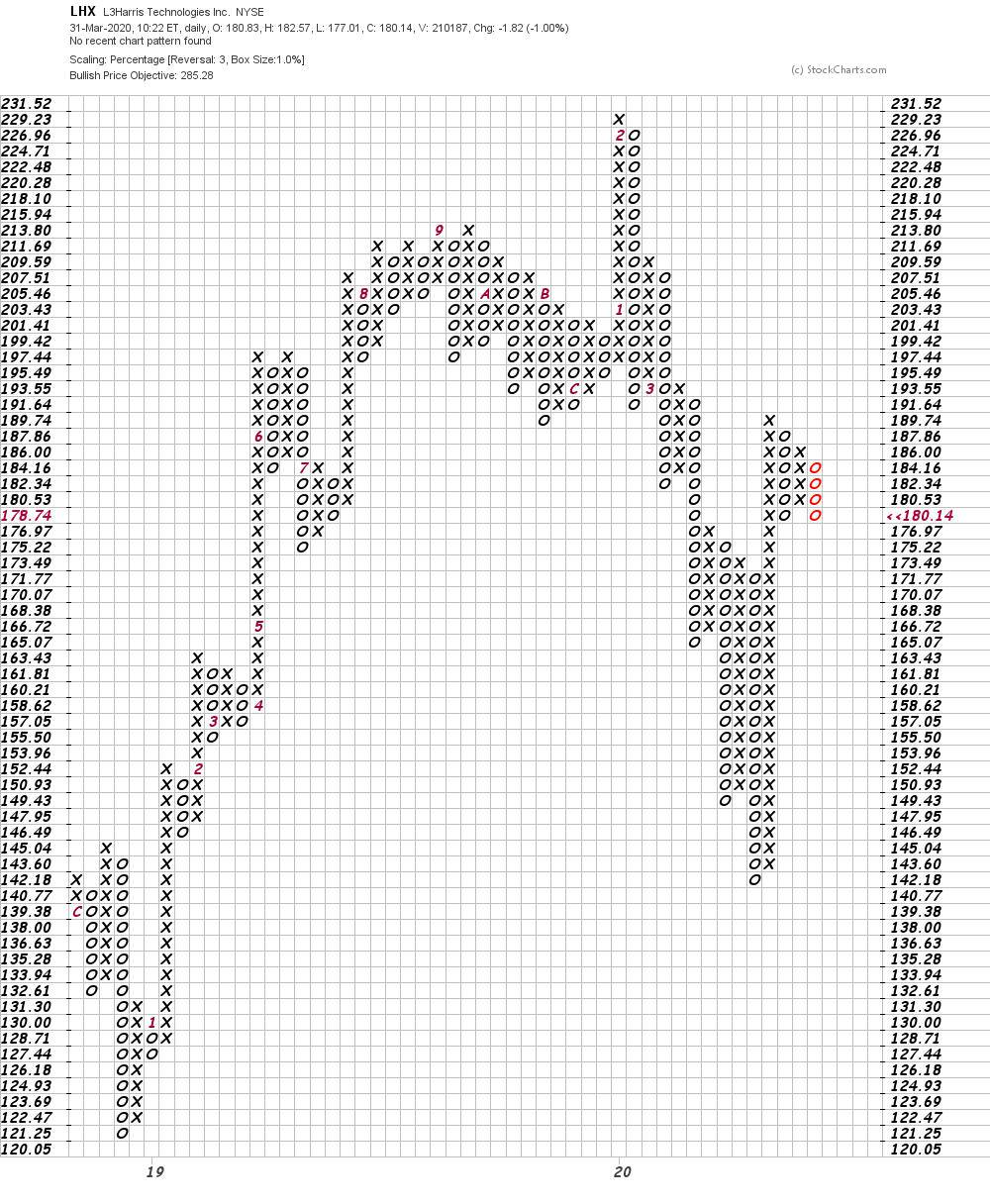 Bottom line strategy: While we have a potential price target of $285 for LHX from the Point and Figure chart, above, we don't see strong volume clues for the stock right now. A retest of the March lows could develop in the next couple of weeks. If we do have a retest and the lows hold we can then think about a long position.
Get an email alert each time I write an article for Real Money. Click the "+Follow" next to my byline to this article.
TAGS: Investing | Technical Analysis | Defense | Mad Money