I'll admit that I doubted myself upon initiating a long position in Kraft Heinz (KHC) . I mean this is a firm that has been truly consistent at one thing... disappointing investors. The firm's total debt-load simply dwarfs the firm's cash position. A current ratio of just barely above "one" seems adequate. Kind of. Sans inventories, at least prior to the pantry becoming the center of nearly all consumer demand, a quick ratio of just 0.56 really was quite awful. At least the dividend, at $1.60 annually yielding 6.2% at the latest prices, is nice. That is until you realize that the firm reduced that dividend little more than a year ago, forcing investors to wonder just how safe the current payout is.

Readers may recall the story I told about how I decided to get long ConAgra (CAG) at the start of this crisis. That being that everything they sold had sold out. Same story goes for Kraft Heinz. Actually tried at that time to build a "pantry trade." Bid for some Campbell Soup (CPB) . Swung and missed, then got out the way when that one came in. Thought about getting long some Kellogg (K) . I mean one would think that Corn Flakes were made of gold. Decided to watch Kellogg, that idea never took off. So, I was left with ConAgra, which may not be a home run, but has been a solid double at a time that much of the rest of my portfolio was being tortured, and Kraft Heinz that at least did offer me a chance to average down prior to starting to move higher.

Kraft Heinz does not report until April 30th. That said, the firm updated investors on sales growth on Monday. This came after announcing on Saturday that the firm had cut output at two U.S. plants as well as one in the UK in response to reduced business to business (restaurant) demand as the pandemic had forced many of those customers to downsize or close. However, the firm also had to add additional shifts to produce consumer targeted packaged foods such as macaroni and cheese, canned foods such as beans, and soups, actually citing demand from U.S. households in particular.

By the numbers, Kraft now states that sales will increase a rough 3%, while organic sales rise something in the neighborhood of 6%, all while the institutional business declines. In fact, the analyst community has still been looking for declining revenue not just for the current quarter, but the full year. On that note, Kraft does caution that the unexpectedly higher sales totals will not likely show up where investors really want to see it, at the bottom line. The firm has had to ramp up spending just to meet the sudden acceleration in consumer demand.

Think there's not much Kraft product on your shelf? Think again. Just scanning the brand names, I know I have quite a few boxes of macaroni and cheese in my garage, I know we have a stash of Oscar Mayer Bologna in the fridge. I know that we have enough Planters peanuts stacked up to last into my senior years. Maxwell House coffee? Not going to run out. Kool-Aid? Well, your not going to run out to buy soda any time soon. Want to flavor your water. It's either Iced Tea, or Kool-Aid. They both stand at the ready in my kitchen.

Investors should note that analyst Kenneth Goldman, who ironically works for JP Morgan and is a highly rated, follows and reiterated his "Overweight" rating on KHC this morning (Tuesday), while raising his price target to $30 from $29. Now, Goldman is not just some guy now reacting to the data, he flipped from a "Hold" to his current rating on March 25th when the stock was trading with a $22 handle. Goldman expects organic sales to go even higher and sees 18% shareholder return over the balance of this year. 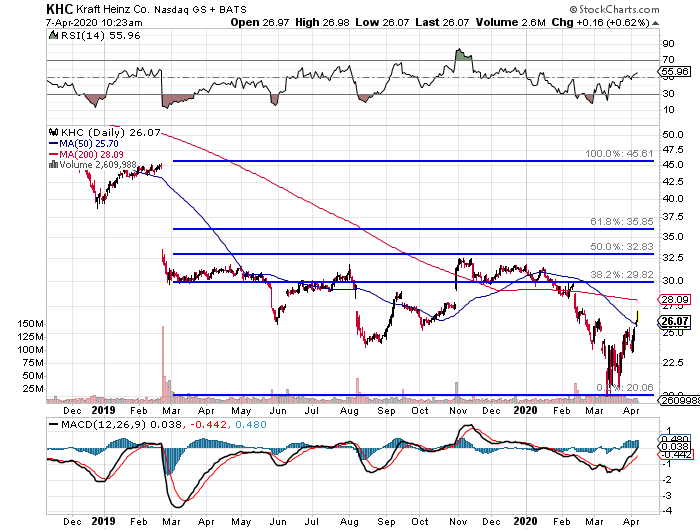 While that would be nice, I am here for the dividend, and because the shares are easier to buy than is the food in New York at this time. I would sell May 1st calls against this long ahead of earnings as a way to reduce net basis, but unfortunately KHC options are extremely thinly traded making the spreads a less than advantageous way to go about engineering a profitable trade. This one is about equity, and erosion of net basis methodically through sustained dividend accumulation. That, I have no problem with. My target price is the 200 day line. Until then, how about some peanuts. Forgot how delicious they are.

Get an email alert each time I write an article for Real Money. Click the "+Follow" next to my byline to this article.
TAGS: Dividends | Investing | Options | Stocks | Technical Analysis | Trading | Food & Staples Retail | Consumer Staples | Consumer Products