If you're an income-seeking investor, it's going to be hard to pass up the 7.2% dividend yield from Kontoor Brands Inc. (KTB) , said Jim Cramer during Wednesday night's "Mad Money" program. But with a yield that high, investors must always ask themselves, "Is it safe?"

Kontoor was spun off just two months ago from apparel maker VF Corp. (VFC) . Inside VF, the slower-growing Lee and Wrangler brands had been weighing down the company's faster growing brands like Vans, so the company decided a spin-off would be best.

Kontoor debuted in May at $38 a share and had slid into the mid-$20s after investors feared the trade war had stunted its growth. But Kontoor explained that 80% of its revenue shortfall stemmed from one-time charges, not long-term systemic issues. Shortly thereafter, the company announced its lofty dividend and shares began to recover.

Cramer said he believes this slow-but-steady company has the balance sheet and revenues to cover its dividend, and its growth profile suggests it may be perfect for income investors. Let's check out the charts and indicators to round out the discussion.

In this daily bar chart of KTB, below, we have just enough data to draw some conclusions. Prices suffered an initial decline, but found buying interest around $26 and the daily On-Balance-Volume (OBV) line held steady. July sees a rally and buyers now coming in around $29. The 20-day moving average line is rising, but the 50-day line is still declining. The Moving Average Convergence Divergence (MACD) oscillator has improved and is just below the zero-line.

In this Point and Figure chart of KTB, below, we can see the decline and the sideways price activity. A decline to $28.65 will likely weaken this chart, but a rally to $31.65 will likely strengthen the picture. 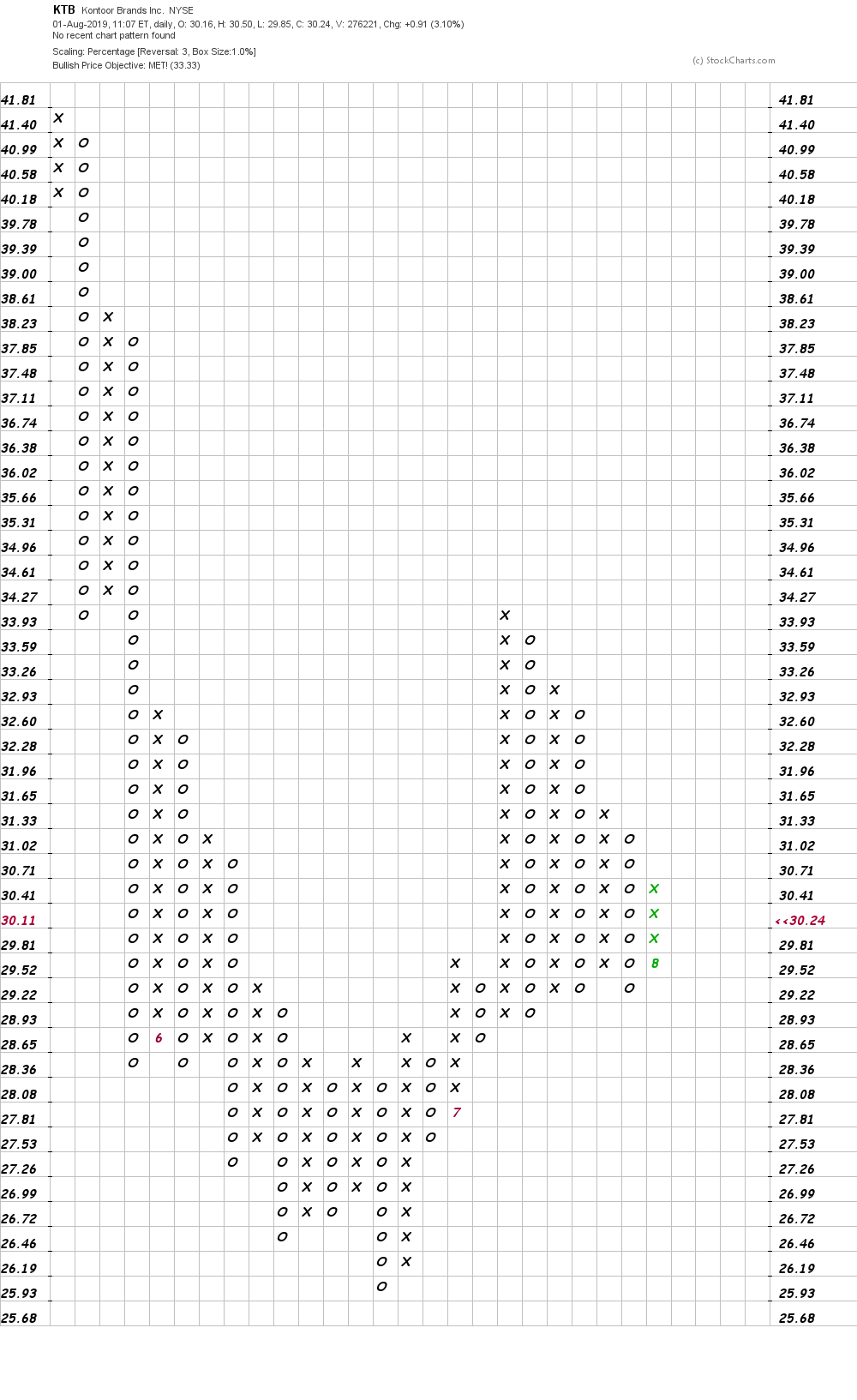 Bottom line strategy: I will leave the financials to others, but the hefty dividend does sound attractive even to me. KTB is likely to trade sideways from here with an upward bias. A close above $34 could generate a rally to $40.

Get an email alert each time I write an article for Real Money. Click the "+Follow" next to my byline to this article.
TAGS: Investing | Technical Analysis | Apparel | Mad Money