Kohl's (KSS) is the Stock of the Day at Real Money Tuesday. Retail analysts seem to have differing opinions. Jefferies downgraded the retailer to a Hold rating from a Buy today. Jim Cramer noted in his column Monday that, "JP Morgan's Matthew Boss, the acknowledged dean of the retail group, could take the cake. If you don't know Boss, he does a ton of fieldwork to find out how retailers are doing. His work is coming up with some pretty shocking results. He's saying that his work shows that a number of store chains (like KSS) could have better-than-expected earnings, including some that will be shockingly better."

Let's check out the charts of KSS to see what they might suggest.

In this daily bar chart of KSS, below, we can see that buyers of KSS have been interested in the stock in the $46-$44 area in June, August, October and early December. The rallies after these price lows petered out around $54 but the rally in November carried up to $59 before gapping sharply lower. The rally in December looks like it has failed short of $52.
Someone might be able to suggest that KSS has been hammering out a bottom formation since June but it does not feel like that to me. Prices are below the declining 50-day moving average line and below the declining 200-day moving average line.
The daily On-Balance-Volume (OBV) line shows a rise from June to November to confirm the idea of a bottom pattern as a rising OBV line signals more aggressive buying, but the line peaks in November and has yet to recover to a new high for the move up.
The Moving Average Convergence Divergence (MACD) oscillator is right on the zero line now but looks poised to turn lower again.

In this weekly bar chart of KSS, below, we can see that the major trend is still down as prices are below the declining 40-week moving average line.
The weekly OBV line has been on the defensive since April and the MACD oscillator is still below the zero line in sell territory.

In this daily Point and Figure chart of KSS, below, a potential downside price target of $46 is being projected. A decline to $46 could mean a test and possible break of the early December low and perhaps further price weakness. 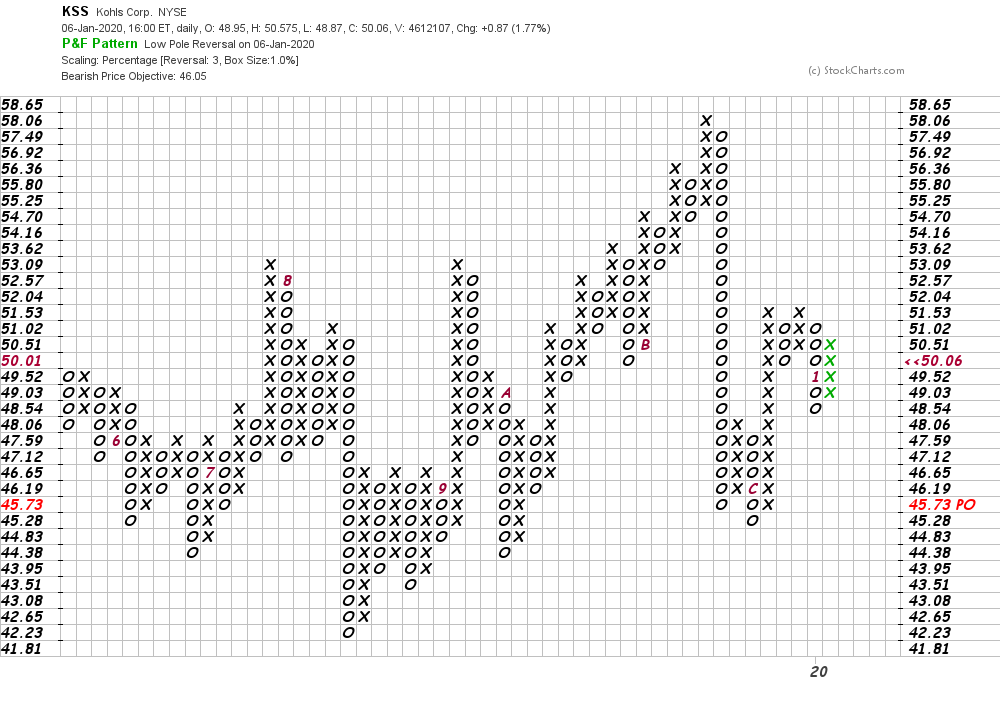 Bottom line strategy: Some chart readers may suggest that KSS is bottoming and could rally in the weeks ahead but a bullish conclusion is not warranted in my opinion. I recommend avoiding the long side of KSS until the charts and indicators show more signs of accumulation (buying).

Get an email alert each time I write an article for Real Money. Click the "+Follow" next to my byline to this article.
TAGS: Investing | Stocks | Technical Analysis | Trading | Apparel | Retail | Consumer Discretionary | Stock of the Day