Kohl's (KSS) , along with Target (TGT) , continued to provide ample evidence Amazon (AMZN) will not kill everyone in the retail business. On Tuesday, KSS reported earnings per share of $2.24, which was seven cents better than estimates. Revenue of $6.82 billion handily beat the $6.58 billion Wall Street consensus. For the forthcoming 2019 fiscal year, management guided earnings per share into a range of $5.80 - $6.15, which lands on the lower end of the range above the current $5.77 estimate. In other words, business is better than expected and the company doesn't see a change in that trade any time soon.

Shares were trading higher by nearly 7%, the first time Kohl's bulls have enjoyed a green post-earnings session of this magnitude since the fall of 2016. Moves of this size, 5%-10%, have actually been common over the past few years, but they've been lower rather than higher. The initial reaction for many traders may be to shy away from chasing, but history doesn't seem to side with that line of thinking.

Over the past 2+ years, KSS shares have managed to remain flat or rally over the next three weeks after earnings. A handful of rallies have even enjoyed double-digit percentage moves.

A close over $71 this week certainly gives the bulls something to crow about from a price pattern standpoint. While Kohl's is trading in a very wide $20 channel dating back to the start of 2018, a small pennant has formed since December. A close over $71 this Friday triggers a breakout from this pattern. It might be too aggressive to believe the stock will trade back to the $80 level; I do see $75 as a realistic target. On the downside, $65 becomes a yellow flag with $60 a huge red flag. Above $65 and the bulls are in full control.

I'd consider a small upside trade with a risk equal to reward and favoring the historical action mentioned above. That thesis sets us on the path of a call spread utilizing in-the-money calls so as to account for the possibility a flat three weeks repeat itself as part of history. 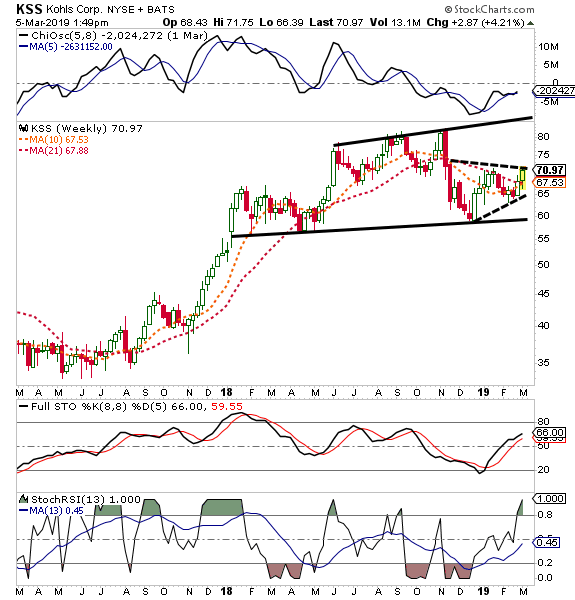