KLA-Tencor Corp. (KLAC) made a correction in September and October which should come as no surprise today, but prices have improved the past few weeks and that could make a difference in the weeks ahead. Let's check out the latest charts and indicators.

In this daily bar chart of KLAC, below, we can see a sideways trading range market from last December to September. Buyers came in around the $100-$95 area for several months until October. October brought a decline to $85 and a period of heavier trading volume. In the past few weeks KLAC rallied back to the $100 area or the bottom of that broad trading range. Prices have retreated from $100 but I am not convinced that this was a sell on rally back to the underside of the trading range (a common trading observation). KLAC rallied above the bottomed 50-day moving average line but remains below the declining 200-day line. The daily On-Balance-Volume (OBV) line shows a rise from late October telling me that buyers of KLAC have been more aggressive. I would expect sellers to be more aggressive on a rally back to what is usually considered resistance. In the lower panel is the Moving Average Convergence Divergence (MACD) oscillator which is back above the zero line in bullish territory. The MACD oscillator could rollover again but for now it is a positive signal.

In this weekly bar chart of KLAC, below, we see some positives. Yes prices are below the declining 40-week moving average line but look at how steady the weekly OBV has been. Look at the MACD oscillator ready for a bullish crossover and cover shorts buy signal on this long-term time frame.

In this Point and Figure chart of KLAC, below, we can see a base pattern from October (look for the "A" on the chart below) and an upside price target of $122.30. 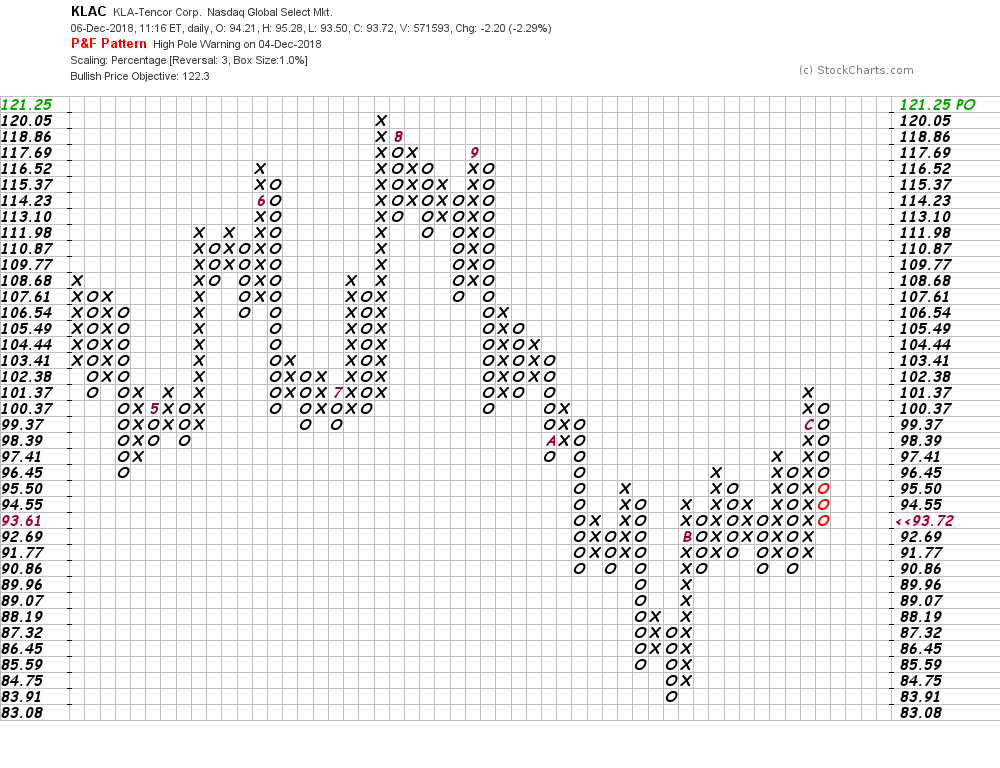 Bottom line strategy: Shallow corrections should be considered a bullish event as traders and investors are not waiting for a deeper correction to buy. I think that is the case for KLAC. Aggressive traders could buy strength above $102.

Get an email alert each time I write an article for Real Money. Click the "+Follow" next to my byline to this article.
TAGS: Investing | Stocks | Technical Analysis | Technology | Technology Hardware & Equipment

We recommend trading AVGO from the long side even with the recent sharp gains.

Today's Market Action Shows the Macro Can Outweigh the Micro

Time to make the leap from avoiding overvalued assets to actually investing in plays that will benefit from a reversion to fair levels of valuation.