Kind of lousy. Not terrible. Just... kind of lousy for a great day. Great day? Tuesday. Wouldn't it have to be? The S&P 500 moved just 0.2% higher, but managed to reach an all-time intraday high as well as closing at an all-time record. It was not just the S&P 500. The Nasdaq Composite also made new (yawn) records. This really has been a terrific rally, executed at tremendous speed. Did you blink? You might have missed the bear market? The Recession? Uhm... yeah. While macro-economic data continues to generally surprise to the upside, the movement is supposed to statistically represent real world behaviors with a lag (outside of survey based-data) of one month or more. My interpretation would be that the economy continues to rebound, but in fits and starts, sideways in others, and depending on one's line of work, quite possibly in a permanent state of decline.

This is why the Dow Jones Industrial Average, the Dow Jones Transportation Average, and key measures of small-cap equity performance (Russell 2000, S&P 600), while in recovery, continue outside of occasional attempted rotations out of growth and into value, to lag our broadest, or most high-tech focused indices exclusive to large caps. Yes, the Industrials, Transports, and small caps all gave up some turf on Tuesday. In fact, the bottom three rungs of Tuesday's sector performance tables belonged to the Industrials, Financials, and Energy. FYI, Communication Services led the way higher and that group was led by the Internet grouping. Shocker.

We have made common mention of the light trading volume of late, and Tuesday showed us no change there. Volume at both the New York Stock Exchange as well as the Nasdaq Market Site increased small from Monday. That said, aggregate trading volume across constituent membership for the Nasdaq Composite and the S&P 500 landed 27% and 25% below (respective) 50 day simple moving averages for each index. Losers beat winners 3 to 2 downtown, while declining volume beat advancing volume almost 2 to 1. Told you. Kind of lousy. Up at Times Square it was obviously a closer ball game. Losers beat winners roughly 5 to 3, but advancing volume did just squeak past declining volume.

Has the Fed created bubbles, or pockets better set up for success in this post modern world? Maybe the market is stuck in the throes of evolution, and we are witnessing this development in real time, leaving one investor wildly successful and another quite perplexed. The pandemic and the quite necessary response have forced windows of opportunity to open more rapidly than they otherwise would have, while simultaneously closing other windows, those of denial perhaps even more quickly. There is no doubt that small caps will be more reliant upon not just economic growth than large caps, but regional and local economic growth at that.

What's smaller than small caps? No, I don't mean micro and nano-caps. I mean Mom and Pop. They're closing forever, and they are the lifeblood of your neighborhood. A weaker dollar will benefit multinational large caps on that sunny day when the world is born anew. A weaker dollar does nothing for most small-caps, and certainly nothing for the nice kid who makes your pizza, or the twenty-something who tutors struggling students. Bubbles? Sure. Understand though that not all bubbles are errors in need of correction. For each town once had more than one blacksmith. The Pony Express once thrived for a very short-time. The Neanderthal thought, communicated, hunted, and loved. The Neanderthal understood fire, understood death. Do we?

Speaker of the House Nancy Pelosi is expected to reconvene that chamber (that went into recess on July 31st) this week to consider legislation that would prohibit the U.S. Postal Service from implementing changes that the chamber's majority thinks could impact the presidential election in November. Yes, even though Postmaster General Louis DeJoy has already stated the intention to pause all operational reforms until after the election due to the outcry. I am a money guy. I have preferences that sometimes are in line with the nation, other times, not so much. What I do in order to provide is adapt to the playing field.

The glimmer of hope that I see is this. Should the House of Representatives actually manage to find their way to Washington with many of their constituents in an ongoing state of household crisis, maybe they can begin negotiating a next phase stimulus (support) package to prop up households and small businesses a little longer, giving those working on vaccines and therapeutics more time to catch up.

Treasury Secretary Steven Mnuchin expressed such hope on Tuesday, though he did not sound optimistic. Perhaps the two sides appear far apart officially, while actually willing to move much closer to the middle should one side or the other make a move. There is word overnight that Senate Republicans are about to move forward with a slimmed down $500 billion proposal that includes only what the two sides already agree upon, getting at least some help out there. Hard to imagine not playing ball while Main Street goes out of business. Have I told you... about the Neanderthal? Can we learn? Please.

The FOMC Minutes come and go. Often with little fanfare, and even less attention, as they are published for the public with a three week lag. Traditionally, the Minutes offer investors clues as what members of the committee were thinking in terms of forward looking implementation of monetary policy. However, now... in this 24 hour news cycle, and in this world of ever shrinking attention spans, three weeks might as well be a lifetime. Suddenly, I become far more concerned with trying to be alive in my eighties than whether or not I was cool back in the 1980's.

That all said, the street may actually focus on what the Fed releases this afternoon. With lines of liquidity already extended, fiscal help seemingly stuck in quicksand, and the Fed publicly committed to very low interest rates for longer than once expected, the attention will likely focus on not only yield curve control, but on bolstering forward guidance for such matters as tolerance for consumer level inflation.

If this is not what the Fed is focused on, this is what they need to focus. (Hint, hint. I know you read me.) Both PPI and CPI data for July reeked of creeping but not yet dangerous inflation. Should the Fed be forced to raise interest rates in self defense prior to a more developed outcome for economic recovery, that would surely put what growth there is on ice. The Fed is going to have to move toward introducing what is known as "average inflation targeting". This way they can artificially keep rates low while allowing for inflation to rise in order to make up for long periods of underperformance before reacting. This would not necessarily be a good outcome for all. What it does is allow for headline economic growth to continue unabated without at least this momentary headwind getting in the way... all while you and I get smacked around at the point of consumer level transaction.

Anyone else notice what Amazon (AMZN) did on Tuesday? I know it's hard. Tesla (TSLA) has been stealing the show of late, all while Elon Musk, aka "The Money Man", attracted $1.9 billion in new funding just for SpaceX. Amazon ran $130, or 4% on Tuesday, closing at $3,312.49. Let me show you what this looks like on a chart. 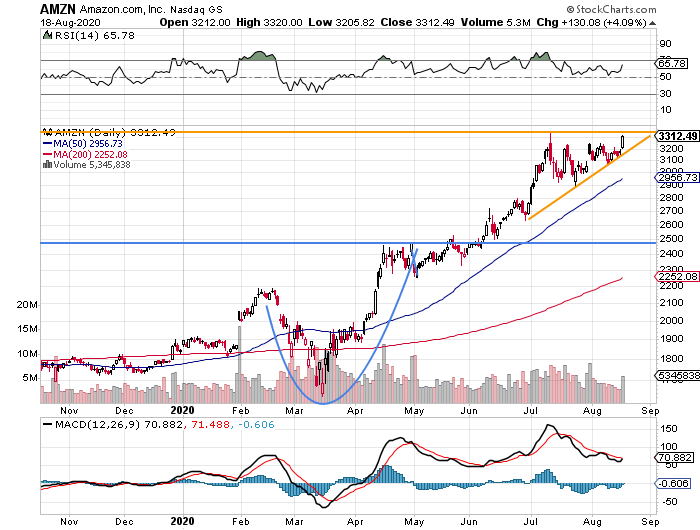 All readers are well aware of the breakout for AMZN that followed the cup with handle pattern created back in March. What I thought I was watching in real time over the past month or so was the creation of a much needed casing pattern. What happened on Tuesday, for me at least, turned this basing pattern into an "ascending triangle."

Technical traders see ascending triangles as bullish, and in the case of a stock already in favor, a signal of continuance in trend. In short, the early July high trade hit the tape at $3,344. If Amazon can take that level, which is now the pivot, I will have to increase my target price from $3,300 to $4,000. Rock on.

(Amazon, TJX, and Nvidia are holdings in Jim Cramer's Action Alerts PLUS member club. Want to be alerted before Jim Cramer buys or sells these stocks? Learn more now.)

Get an email alert each time I write an article for Real Money. Click the "+Follow" next to my byline to this article.
TAGS: Economic Data | Economy | Investing | Markets | Stocks | Technical Analysis | Trading | Retail | E-Commerce