Abbott Laboratories (ABT) has been one of my longs directly related to the national response to the Covid-19 pandemic largely since the public health crisis had barely even started to develop. Abbott has developed now five coronavirus tests, three that search the patient for genetic material created by the virus itself, and two that detect antibodies that would reveal past exposure to the SARS-CoV-2 virus, that hopefully would provide a measure of immunity for that individual against reinfection. The firm had been in my opinion, quite heroic in directly attacking the immediate needs created by the situation.

On Wednesday morning there was news, perhaps unsettling news, that at least according to researchers at NYU Langone Health in New York City that Abbott's five to fifteen minute test had missed a number of positive cases detected by a test created by privately held Cephoid's 45 minute test. It should be mentioned that the study was not peer reviewed, and only included a small group of emergency patients. That said, by mid-day Wednesday, an Abbott Labs spokesperson defended the test as largely very accurate.

By Thursday evening, the FDA had cautioned the public that Abbott's ID Now point of care diagnostic system that identifies the presence of this coronavirus may generate false negative results. What the FDA is trying to say reads to me as this test can still be used to identify positive cases, but that negatives where the patient's symptoms possibly present otherwise should confirm that negative through the use of another test.

Abbott Labs, also on Thursday, and reported in the Wall Street Journal... stated that the firm would change the instructions for using the rapid results coronavirus test, and that negative results produced through use of the ID Now device would be deemed "presumptive", and then be verified through another test for patients showing signs of having contracted the virus. The thing is this. This test has been used by the White House to test the president, the vice president, and others who circulate around the top levels of the administration.

Not to cause alarm, but given that one of the president's military valets, one of the vice president's key aides, a personal assistant to the president's daughter have all tested positive for the coronavirus, this probably creates a few negative results that would need confirmation. I am sure that the White House is way ahead of this article on getting that done. Still, it does raise concern.

For me? No. The firm has long been a consistent mid-single digit revenue producer. For the first quarter, reported in mid-April, Abbott beat expectations as growth in established pharmaceuticals and in the nutrition outperformed. The firm did have to pull guidance, and the current quarter, according to the analyst community, is understandably not shaping up as stellar. 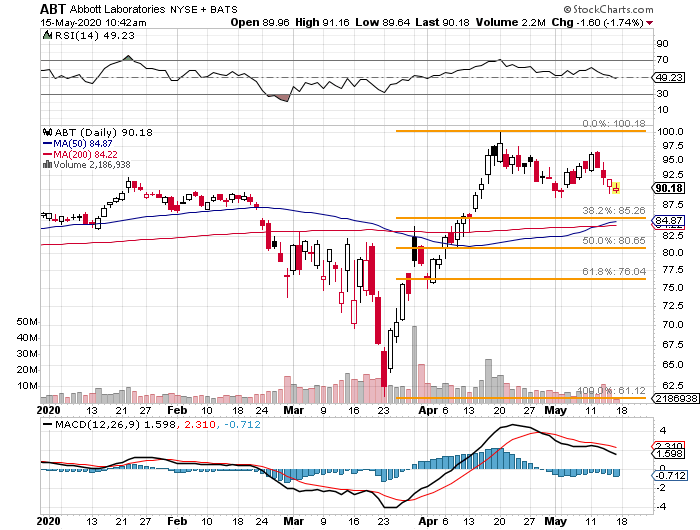 What I see is a 50 day SMA, a 200 day SMA, and a 38.2% retracement level that all live in the same neighborhood. The $85 level had been my panic point. I think given the level of congestion that we now see at that spot, it becomes an add, should we see it, and not a sale. My target price remains $110, and what I will do is drop my panic point to the 50% retacement level, which is roughly $80. Stock may be down today, but at least today is pay day ($0.36) as far as the quarterly dividend is concerned.

(Abbott Laboratories is a holding in Jim Cramer's Action Alerts PLUS member club. Want to be alerted before Jim Cramer buys or sells ABT? Learn more now.)

Get an email alert each time I write an article for Real Money. Click the "+Follow" next to my byline to this article.
TAGS: Drug Approvals | Earnings | Investing | Markets | Stocks | Technical Analysis | Trading | Analyst Actions | Coronavirus