Although we can't rely on it, luck does have a way of impacting trading. Last week, I tossed out Uber (UBER) as a long trade idea with the October 18, $28.50 around $1.85. Despite a market in the red today, an upgrade from Citi has Uber in the green. It also has those calls around the $2.35 level. It might seem silly to say I'd grab some small profits on half the position, but that's what I'm doing as the overall market simply lacks push to start the week.

Citi pegged $45 as its target based on improved risk/reward, Q3 results offers an improving shift of investor sentiment, and the sum-of-the part valuation is appealing. This almost feels like saying the same thing three different ways. It's a little less compelling than I'd hoped for after seeing the upgrade headlines. Add in the $260 million hit Goldman Sachs absorbed from its equity bet on Uber. Are they going to try and pull investors in during Q4 so they can get out? I mean, because it is a bargain.

I don't travel a ton, but every other month I find myself in New York, Chicago, Baltimore, or another fair-sized city. This past weekend was Knoxville. When I travel, more times than not, I use ride-sharing. If the driver is up for it, then I'll ask about Uber versus other ride-shares, because if you didn't know it by now, it seems most of the drivers are working for multiple ride-share services at the same time. The same person you hire for an Uber ride could also be picking you up as a Lyft (LYFT) driver later in the same day or even as an alternate choice on the same trip.

Anyhow, on the way to the airport, I asked the driver how he liked Uber. He responded that he loved it because Uber took care of him. It seems for a period of two weekends, when this driver makes the majority of his money driving for events like the University of Tennessee football games, his driver app wasn't working properly. No matter what he and Uber tech support tried, they couldn't get it working. Rather than say too bad, Uber gave him $500 per weekend he missed driving. Given some of the horror headlines I've seen around the treatment of ride-share drivers, it might be surprising to hear one this positive. It hasn't been for me though. On a recent trip to Baltimore, my Uber driver told me how the job was one of the few that allowed him to finish the training he needed to get a position with Amazon (AMZN) . 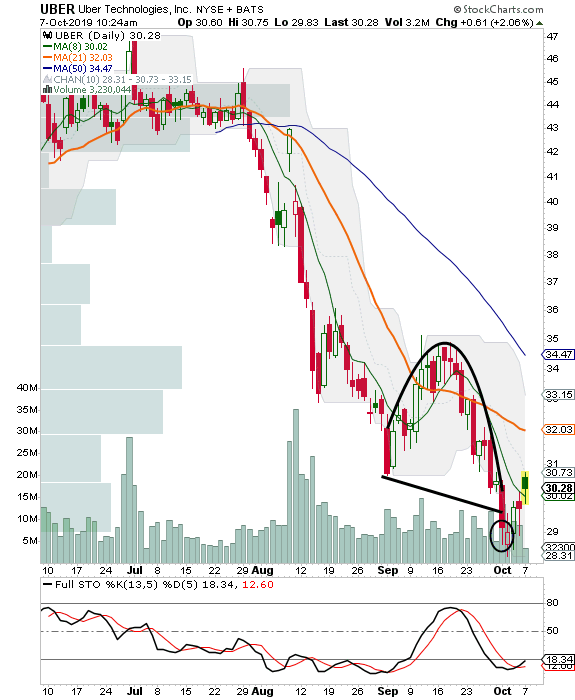 This isn't fundamental or a technical view, but positive drivers might go a long way towards helping turn sentiment around the company. Short-term sentiment has changed on the stock. We still see that potential early October bottom in the price action along with the bullish crossover in the Full Stochastics indicator. I've tempered upside expectations a bit into the $31.50 to $32 area, which is why taking half the call position here feels like the correct move. I wouldn't chase as I expected more from the upside, but certainly keep an eye on Uber.

Get an email alert each time I write an article for Real Money. Click the "+Follow" next to my byline to this article.
TAGS: Investing | Stocks | Technical Analysis | Trading | Transportation | Stock of the Day | Earnings Preview